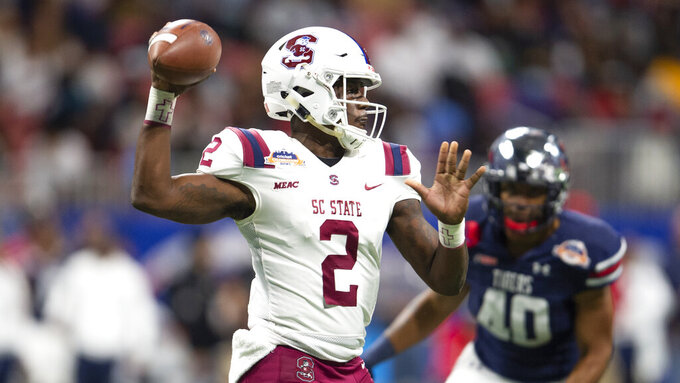 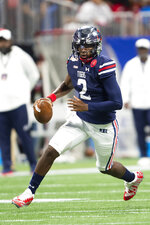 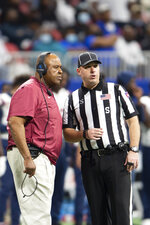 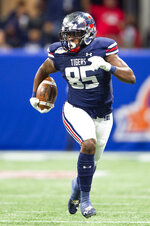 ATLANTA (AP) — Deion Sanders and his Jackson State Tigers were riding high entering the Celebration Bowl. There was not much to celebrate afterward.

Cory Fields Jr. threw for four touchdowns, three to Shaquan Davis, and South Carolina State stunned Jackson State 31-10 on Saturday in a game considered to be the national championship of historically Black colleges and universities.

The Bulldogs scored their first three touchdowns shortly after turnovers by Jackson State (11-2) gave South Carolina State the ball in the red zone, at the Jackson State 5-, 16-, and 19-yard lines. And all three came after miscues by freshman quarterback Shedeur Sanders, son of the head coach. He threw two interceptions, one which glanced off the hands of a receiver, lost a fumble when sacked, and completed just 16 of 36 passes for 175 yards.

“South Carolina State kicked our butt, every way, every fashion,” said Deion Sanders, who inked a prized recruit for next season at mid-week. “They were more physical than us, more disciplined than us. We were overconfident and felt like they were just going to hand us the game.”

Beyond the heroics of Fields and Davis, South Carolina State punter Dyson Roberts Jr., who averaged 49.9 yards on eight kicks, helped tilt the field in the Bulldogs' favor with a 72-yarder in the first quarter.

“The punter was the MVP of the game without a doubt,” said South Carolina State head coach Oliver Pough. “We hadn't done a thing in the entire first quarter, and then he hits a punt and completely flips the field, and we were able to get a turnover on defense and give the offense a short field and get a score.”

Fields completed just 12 of 31 passes, but his four touchdown passes were sweet. Davis caught a game-high five passes for 95 yards.

Shedeur Sanders guided the Tigers to a touchdown on their second possession, hitting Keith Corbin III with a 7-yard TD midway through the first quarter.

Midway through the second quarter, South Carolina State defensive end Patrick Godbolt sacked Shedeur Sanders and forced a fumble. Linebacker BJ Davis recovered to set the Bulldogs up at the Jacksonville State 5-yard line. Three plays later, Fields hit Davis over the middle for a touchdown to tie the score at 7-7.

Davis, a native of Summerville, South Carolina, delivered a celebratory dance — complete with high-stepping — in the end zone that was a perfect imitation of those Deion Sanders performed many times after he made big plays as a defensive back with the Atlanta Falcons from 1989-93.

Davis was just muscling up.

“I just had to be more physical,” Davis said. “I wasn’t getting any calls (for pass interference). They were grabbing, pushing, pulling, so I knew I had to get more physical with them.”

The Bulldogs took a 10-7 lead on Gavyn Zimmerman’s 26-yard field goal shortly before halftime and pulled away in the second half.

Fields and Davis hooked up twice for 16-yard scores, once early in the third that stretched the lead to 17-7 and again in the fourth to cap a 93-yard drive that took 6:18 off the clock. Fields also hit Richard Bailey for a 15-yard TD in the third.

BJ Davis had nine tackles and Godbolt had five tackles, three quarterback hurries, one pass breakup and 1.5 tackles for lost yardage for the Bulldogs.

JACKSON STATE: Deion Sanders has a solid Championship Subdivision program and now has one of the top recruits in the country coming aboard. Cornerback Travis Hunter of Suwanee, Georgia, rated the No. 1 overall national recruit, spurned Florida State and signed with Jackson State on Wednesday.

SOUTH CAROLINA STATE: The Bulldogs pulled off the big upset and can build on that going forward.