First-year transfer QBs struggle to find footing in the ACC 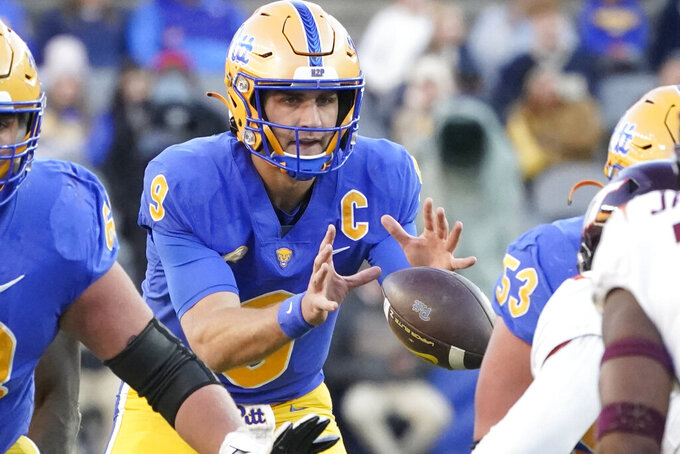 FILE - Pittsburgh quarterback Kedon Slovis (9) takes a snap against Virginia Tech during the second half of an NCAA college football game, Saturday, Oct. 8, 2022, in Pittsburgh. First-year transfer quarterbacks are struggling to adjust to life in the ACC. (AP Photo/Keith Srakocic, File)

Kenny Pickett's storybook finish at Pittsburgh last fall included a little bit of everything. A trip to New York as a Heisman Trophy finalist. Claiming t he ACC Offensive Player of the Year Award while serving as the driving force behind the program's first conference championship since coming over from the Big East in 2013.

He was also what is becoming the college football equivalent of a unicorn: a four-year (plus) starter at the most important position in the sport.

The tack Pitt coach Pat Narduzzi chose in searching for Pickett's successor has become the norm, one that is a calculated risk for all involved. Rather than have backups Nick Patti, Davis Beville and Joey Yellen compete for the right to take over for Pickett, Narduzzi turned to transfer Kedon Slovis, who left Southern California for western Pennsylvania last December.

The results have been mixed at best. Slovis has just five touchdown passes against five interceptions and the Panthers (4-4, 1-3) essentially saw any chance at repeating as Coastal Division champion end with a loss to North Carolina last week, a game in which Slovis completed less than half of his attempts (14 of 31) and failed to produce any points in the fourth quarter.

Narduzzi has continued to back Slovis as the starter while allowing he was put in a difficult position. Not only was Slovis tasked with replacing a program icon, but he also had to do it while working with a first-year offensive coordinator in Frank Cignetti.

“We all want instant success, I get it,” Narduzzi said.

Narduzzi pointed to the arc of Pickett's career at both Pitt and now the NFL — Pickett is currently the starting quarterback for the Pittsburgh Steelers — as proof of the benefit of a little patience.

“It’s the same thing for Kenny right now compared to where he’s going to be in two or three years,” Narduzzi said.

Pickett, however, has the benefit of time. He signed a four-year contract with an option for a fifth after the Steelers selected him with the 20th overall pick. It's a luxury that Slovis — who arrived at Pitt with two years of eligibility remaining — and other transfer quarterbacks do not have. They face a time crunch in a role where time is usually a vital component of a player's development.

“The expectations are there because they’re (like) a No. 1 pick,” North Carolina coach Mack Brown said. “But it takes a while.”

Slovis is hardly the only first-year transfer quarterback to endure growing pains in the spotlight. Grant Wells has found the sledding tougher at rebuilding Virginia Tech than he did at Marshall.

Zoom out beyond the ACC and for every first-year transfer quarterback that is making an immediate impact — Caleb Williams at USC, Michael Penix at Washington — there are players like Slovis, Spencer Rattler (South Carolina) and JT Daniels (West Virginia) who are still trying to figure things out, all while time is essentially running out, in 2022 at least.

At least Slovis, Rattler and Daniels have held onto their jobs. That hasn't been the case at N.C. State. The Wolfpack lost star Devin Leary to a season-ending injury in October. That opened the door for Charleston Southern graduate transfer Jack Chambers. Chambers started in a loss to Syracuse on Oct. 22 and was eventually replaced by MJ Morris.

Chambers, however, was taking a significant step up in class from the FCS to the FBS. That wasn't the case for Slovis and to a lesser extent, Wells.

Their coaches have praised their efforts to speed up the adjustment process. Slovis tried to emulate the “10,000 throws” program Heisman Trophy winner Joe Burrow used after transferring from Ohio State to LSU. Slovis spent the offseason relentlessly working with his new teammates hoping chemistry would come sooner rather than later.

It hasn't. At least not consistently, leaving Slovis as a flashpoint for an offense that has morphed from one of the most potent passing attacks in the country behind Pickett and 2021 Biletnikoff winner Jordan Addison (now at USC) into one that's become reliant on running back Israel Abanikanda's legs to move the ball.

“The one thing about the quarterback position, when it goes well, you get all the glory when it doesn’t go so well, you get most of the blame,” Pitt wide receivers coach Tiquan Underwood said. “(Kedon's) done a great job just being a leader.”

While the Panthers are out of the mix for the ACC championship, Slovis — like Wells — should have next year to get it right.

A quick scan around the ACC reveals it's the second year and not the first when things typically start to click. Garrett Shrader was thriving in his second year at Syracuse before leaving last week's loss to Notre Dame with an injury.

Narduzzi doesn't have to look far for an example of a transfer quarterback who had the lightbulb go off in his second — and final — season. Nate Peterman was OK in his first year at Pitt in 2015. In 2016, he guided the Panthers to wins over Penn State and eventual national champion Clemson on his way to earning an extended gig in the NFL as a backup in places like Buffalo, Las Vegas and Chicago.

If Slovis starts through 2023, it means Narduzzi will likely have to repeat the process of finding another well-known transfer to come in and compete against underclassmen for the chance to be Slovis' replacement, a cycle that is now far more common than Pickett's long run with the Panthers.

Not that Narduzzi is complaining. He's simply trying to keep up with the times. The transfer portal and the lure of bringing in a proven quarterback is now part of the fabric of college football.

“I would do it all over again,” Narduzzi said. “I mean (Slovis) is very, very talented. And he’s got another year. I would imagine in another year he’s going to be a heck of a lot better than he is this year.”