Flawed but resilient, No. 1 Alabama peaking at right time 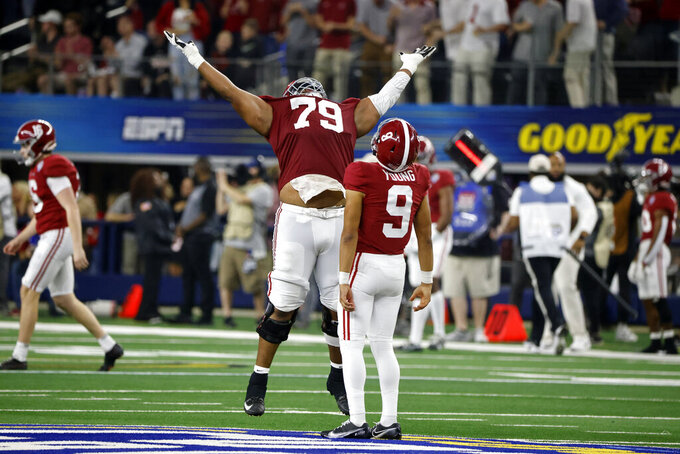 Down to the last play of the regular season, this Alabama team managed to bounce off the ropes when it seemed most vulnerable.

It is unlike some previous Nick Saban powerhouses that have been seemingly destined for the national title game — barring a shocker along the way — from start to finish.

The 2020 team batted aside every opponent during the regular season with a seemingly unstoppable offense.

The 2011 defense was equally formidable, even in a regular season slipup against LSU ( losing 9-6 in overtim e). The 2009 team, like last season's, was unbeaten.

It wasn't always clear how good the 2021 version would end up becoming.

This team was flawed and seemingly vulnerable — at least until the Southeastern Conference championship game against No. 1 Georgia. But Bulldogs seemed to have claimed the juggernaut mantle but Alabama walked away with a comfortable 41-24 win.

It was an impressive win for those underdogs at 'Bama.

Not that there wasn't reason to doubt the Crimson Tide.

The offensive line appeared suspect even before some injury issues. The defense lost linebacker Christopher Allen to a fractured foot in the opener against Miami. And the offensive backfield has been down to two healthy scholarship tailbacks through the last four games.

Saban seemed to adopt a gentler touch for this group, publicly at least. Praising more than criticizing not-so-dominant efforts after games, letting a younger group grow and evolve. Like a parent not treating all his kids just the same.

“We’ve got a lot of young players that are out there playing,” Saban said. “I think when you have success the previous season, which the guys that did come back were very successful, it really took a long time for us to sort of develop the chemistry on this team from a leadership standpoint.”

The results were survival games against Florida, LSU and Auburn — all of whom wound up 6-7. Not to mention a 41-38 loss to then-unranked Texas A&M before going on an eight-game win streak.

“It’s been a special journey, especially knowing that a lot of people doubted us throughout the season,” tight end Cameron Latu said. “And we had to just find our identity as a whole.”

Four of Alabama's wins have come by seven points or less.

Only one was that close last season: a 52-46 win over Florida in the SEC championship game.

So if this doesn’t go down with a real case as one of Saban’s best Alabama teams, it’s certainly among the most tested and one that has been peaking at just the right time.

Alabama did have to replace six first-round NFL draft picks — five from the offensive side — and three Heisman Trophy finalists, including winner DeVonta Smith.

“I feel like adversity has been a big theme for us this whole season,” said quarterback Bryce Young, who brought a second straight Heisman to Tuscaloosa.

But it still needed a last-gasp 97-yard drive and four overtimes to beat Auburn and keep those playoff hopes alive.

Only the ending — happy or otherwise — will determine this team's final legacy. But others in the Saban era are awfully hard to measure up to, including six national championship teams.

Last season's team romped through a 10-game, league-only season thanks largely to an offense led by Smith and fellow Heisman Trophy finalists Mac Jones and Najee Harris. The Tide had one of the nation's best offenses, averaging 48.5 points and 541.6 yards per game.

So that group would need all of nine quarters to match the total of 106 points allowed by Alabama in 2011, one of four Saban teams to lead the nation in scoring defense.

This one has plenty of star power. And the battle scars from a season that could have gone the other way after the Texas A&M loss.

“We all came together at this point, and we’re locking in to get ready to finish this off for the season,” linebacker Christian Harris said. “So if we had a rough time in the season, we definitely are making it up.”