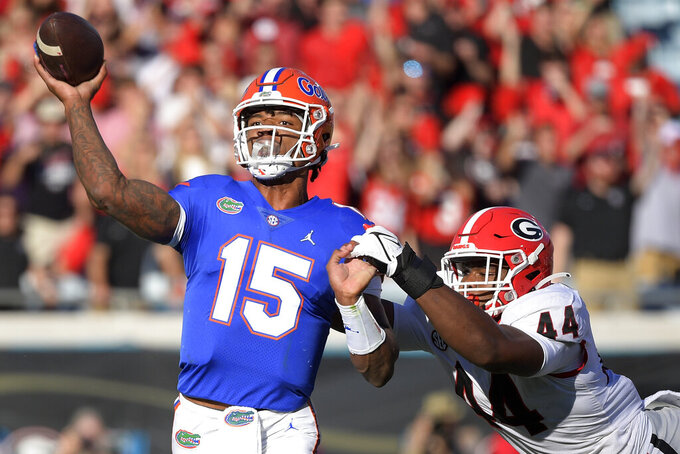 FILE - Florida quarterback Anthony Richardson (15) throws a pass while under pressure from Georgia defensive lineman Travon Walker during the first half of an NCAA college football game Oct. 30, 2021, in Jacksonville, Fla. Richardson is now Florida’s unchallenged – and still unproven — starting quarterback, a budding star who’s already become a popular name found near the top of several 2023 NFL mock drafts. But he needs to stay heathy, something he failed to do as a backup last season. (AP Photo/Phelan M. Ebenhack, File)

He’s big. He’s fast. He’s got arm talent. He’s smart. He’s polished. He’s a hometown hero who grew up in Gainesville and is eager to take over a coveted job in front of longtime friends and beloved family members.

He’s everything the rebuilding Gators need and everything opposing defenses fear. He just needs to stay heathy, something he failed to do as a backup last season.

“It’s always been a worry of mine,” Richardson said a few days before Florida opens the season against No. 7 Utah. “It’s not a good feeling when you can’t contribute to the team, not being healthy, because I hate being hurt, everybody does.”

The 6-foot-4, 232-pound Richardson flashed in a backup role behind Emory Jones last season, running wild against Florida Atlantic and South Florida before a hamstring injury sidelined him two games.

He got his lone start in late October against Georgia’s generational defense. But he turned the ball over three times in a two-minute span late in the second quarter and then sustained a concussion after halftime.

He was scheduled to return the following week at South Carolina but tweaked his right knee dancing in the team hotel the night before the game and was scratched. He was back in action three weeks later against Florida State and rallied the Gators to a victory. But he was done for the season following arthroscopic knee surgery two weeks later.

His season can best be described as a promising career start that never really found a rhythm because of repeated setbacks.

Nonetheless, Richardson has drawn comparisons to 2010 Heisman Trophy winner Cam Newton. Richardson welcomes the flattery because Newton was his idol growing up.

“Honestly, it feels great,” Richardson said. “He’s been my favorite since like fifth, sixth grade. Just to be compared to him, it makes me feel good. It makes me feel like I’m doing something right. … They think I’m going to be just as good as him, so hopefully I can do that and show people what I can do.”

First-year Florida coach Billy Napier has been quick to temper growing expectations surrounding the centerpiece of his offense.

“I know we all want to put a crown on his head,” Napier said. “The guy has completed 33 passes in his career. The great quarterbacks at the University of Florida, they compete 33 in one game, so I think we’ve got work to do there.”

It starts with keeping Richardson healthy. He promised to give up pregame backflips that wowed fans and teammates. He insisted he won’t be dancing “like that” during the season. And he even learned how to slide, something he rarely did in 2021.

The Gators need him to be smart and avoid taking shots in the open field. After all, backup quarterback and Ohio State transfer Jack Miller is sidelined at least the first two games of the season following thumb surgery.

Jones transferred to Arizona State in the spring, clearing the way for Richardson to take over after a year in which Florida fans clamored for him weekly. It’s Richardson’s show now — he had to beg teammates to get enough tickets for his friends and family to witness his first start in the Swamp — and it begins on a huge stage against the defending Pac-12 champions.

“Expecting to see great things,” tight end Dante Zanders said, comparing Richardson to New York Giants dynamic receiver and 2021 first-round pick Kadarius Toney. “He’s Kadarius Toney at the quarterback position. He’s got an arm on him. He can do incredible throws off his back leg, run, everything.”