Florida vs. Georgia shapes up as playoff elimination game 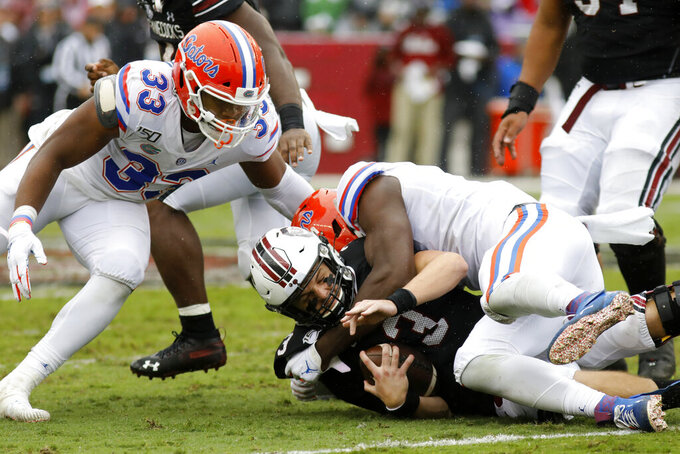 Here are some things to watch during the 10th week of the Southeastern Conference football season.

No. 6 Florida (7-1, 4-1 SEC) vs. No. 8 Georgia (6-1, 3-1) at Jacksonville, Florida: The winner of this game moves a giant step closer to representing the Eastern Division in the SEC championship game. The loser is essentially eliminated from playoff contention. Florida enters this game with its highest AP Top 25 ranking since December 2012 as it tries to snap a two-game skid in this annual series. Both teams are coming off an open date and should be rested for this showdown.

Mississippi running game vs. Auburn run defense: Ole Miss averages 232.5 yards rushing per game to rank second in the SEC, behind only Georgia. The Rebels have four players with at least 300 yards rushing: Scottie Phillips (124 carries, 538 yards), quarterback John Rhys Plumlee (86-508), Jerrion Ealy (48-384) and Snoop Conner (43-307). That rushing attack faces arguably its toughest test of the season thus far against No. 11 Auburn, which ranks 16th among all Football Bowl Subdivision teams in run defense. The Tigers are allowing 105.9 yards rushing per game and 3.25 yards per carry.

No. 1 LSU is atop the AP Top 25 for the first time since 2011, when it owned the No. 1 ranking before losing to Alabama in the BCS championship game. ... Florida has won six games that it trailed in the fourth quarter during Dan Mullen's two-year coaching tenure. ... The team with the most rushing yards has won the Florida-Georgia game each of the last 13 years. ... Arkansas' C.J. Grady got his 12th career touchdown catch - the most ever by a Razorbacks tight end - in a 48-7 loss to No. 2 Alabama last week. ... Tennessee's Jauan Jennings had 174 yards receiving and two touchdowns last week in a 41-21 victory over South Carolina. He became the first Volunteer to have both 150-plus yards receiving and two touchdown catches in an SEC game since Donte' Stallworth had 169 yards and three scores against Kentucky in 2001.

Florida has played better than Georgia the last few weeks and is now the higher-ranked team, yet the Bulldogs are 6 ½-point favorites in this neutral-site matchup. Florida should at least cover the spread if the Gators don't win outright. ... Mississippi State has looked bad enough during its four-game skid that it could be vulnerable as a 7 ½-point road favorite at lowly Arkansas.

After leading Tennessee in tackles in 2017 and 2018, senior linebacker Daniel Bituli missed the Volunteers' first two games this season while recovering from arthroscopic knee surgery. Without Bituli on the field, Tennessee lost to Georgia State and BYU. Bituli is now back in peak form with the Vols playing their best football of the season. Bituli had arguably the finest game of his career last week as he recorded 15 tackles against South Carolina. Bituli also scored a touchdown by blocking a punt and pouncing on the ball in the end zone.