Former Syracuse star Tim Green has his No. 72 retired 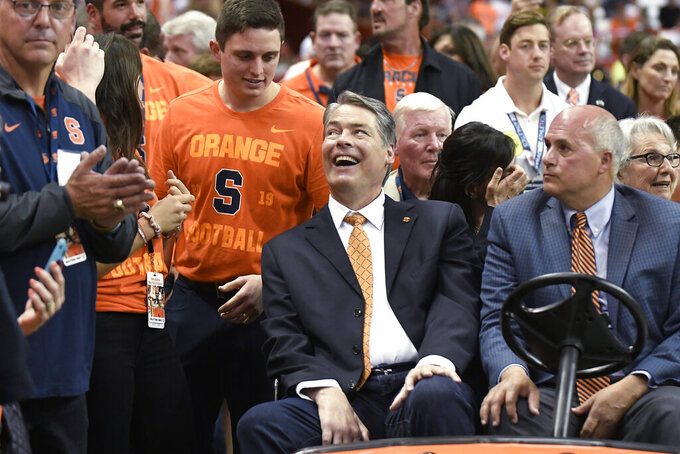 SYRACUSE, N.Y. (AP) — Former Syracuse All-America defensive lineman Tim Green had his No. 72 jersey retired at halftime of the Orange's game against No. 1 Clemson.

The 55-year-old Green, who was diagnosed just over three years ago with amyotrophic lateral sclerosis, more commonly referred to as ALS or Lou Gehrig's Disease, was transported to midfield in a golf cart and his son, Troy, read an appreciation before his dad waved to the crowd.

Green tallied a school-record 45 1/2 sacks and 341 career tackles, the most for a Syracuse down lineman, from 1982-85, and played eight seasons in the NFL with the Atlanta Falcons.

After his playing career, Green earned a law degree, served as a commentator and radio and television host, authored more than 30 books, was presented with the NCAA Silver Anniversary Award, and was inducted into the College Football Hall of Fame.

A native of the Syracuse suburb of Liverpool, Green has used his diagnosis to start the Tackle ALS campaign, and his family partnered with the Sean M. Healy & AMG Center for ALS at Massachusetts General Hospital. More than $3 million has been raised to fund research for a cure.

Green is the first defensive player in the program's 130-year history to have his jersey retired. He joins RB Larry Csonka (39), TE John Mackey (88), QB Donovan McNabb (5), QB Don McPherson (9) and WR Joe Morris (47) in the Dome rafters. The No. 44, which was worn by 25 players, including running backs Jim Brown, Ernie Davis and Floyd Little, is also retired.