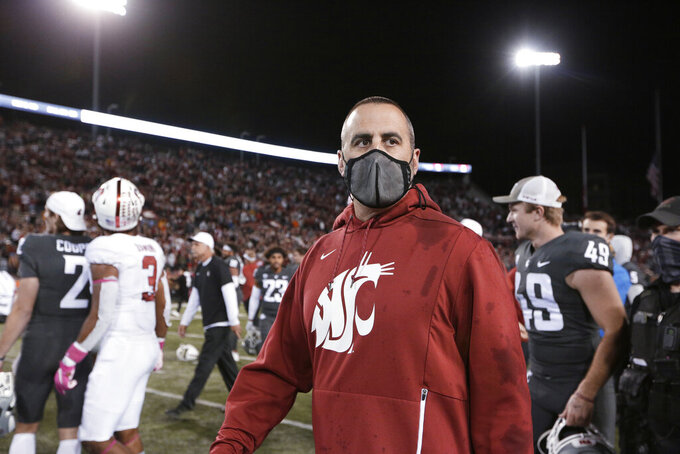 SPOKANE, Wash. (AP) — Attorneys for former Washington State coach Nick Rolovich sent a letter to the university appealing his firing for refusing to get the coronavirus vaccine, contending school officials did not conduct a fair process to determine whether he should receive a religious exemption to a state mandate that all state employees must be vaccinated.

Attorneys Brian Fahling and Eric Kniffen's letter to athletic director Pat Chun lays out their appeal of Rolovich's firing for just cause.

The letter says Chun overturned a decision by the university's Human Resource Services to grant Rolovich a religious exemption to the vaccination mandate. Rolovich has said he is Catholic. The Catholic Church has not prohibited vaccinations against COVID-19.

“This is your opportunity to step back, re-examine your illegal and unconstitutional conduct, and adopt a different posture toward Coach Rolovich before you and the university are forced to defend your conduct in the context of a federal court civil rights action,” the letter said.

Fahling has said Rolovich intends to file a lawsuit over his firing.

Chun did not immediately return messages left by telephone and email Thursday. A university spokesman said the school would have no comment on the letter.

Rolovich completed his application for a religious exemption on Sept. 28. School officials notified Chun on Oct. 6 that Rolovich was entitled to a religious exemption and that the athletic department needed to decide whether accommodations could be made for Rolovich to safely continue working as head coach, the letter contends.

On Oct. 13, the athletic department responded to the Human Resource Services that it could not safely accommodate Rolovich, the letter said.

Rolovich and four of his assistants were fired on Oct. 18. Rolovich was the first major college coach to lose his job over his vaccination status.

Defensive coordinator Jake Dickert was elevated to acting coach and the Cougars (5-4) have gone 1-1 since Rolovich was fired. They remain in contention for the Pac-12 North title and a bowl game.

Rolovich, 42, was the highest-paid state employee with an annual salary of more than $3 million. He was fired for cause, which means the university does not have to honor the rest of his contract.