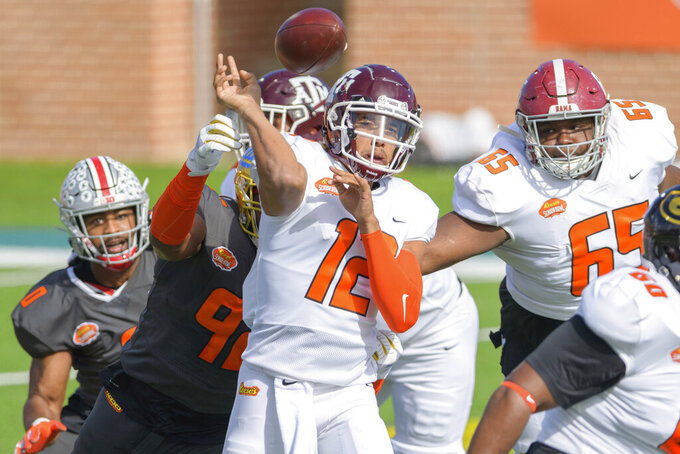 Franks, a graduate transfer from Florida, set up the all-SEC West scoring connection with a 29-yard completion to Louisville's Dez Fitzpatrick. Fitzpatrick had six catches for 90 yards in the showcase game for senior and graduate NFL prospects, earning offensive player of the game honors.

Mond was the MVP with a huge third quarter when he passed for 141 of his 173 yards and a pair of touchdowns after a slow start.

“It was a great feeling whether it was a simple drop back or making an insane play,” the former Aggies standout said. “Everything was kind of rolling my way. Obviously, kind of shaky at the beginning but it definitely shows a lot of poise to be able to bounce back.”

North Carolina running back Michael Carter also had a big game. Carter scored on a pile-driving 12-yard run late in the third quarter to help the National retake the lead after a Mond-led comeback.

Jamie Newman completed a 10-yard touchdown pass to Trevon Grimes with 49 seconds left for the American team after Franks and Yeboah made it a two-score game. The former Wake Forest quarterback, who transferred to Georgia but opted out before the season, set it up with a 35-yard completion to Bowling Green tight end Quintin Morris.

Tulane defensive lineman Cam Sample was the defensive player of the game. Sample had seven tackles and a share of a sack in a game blending players from Group of Five, small college and Power Five teams.

“We don't play the Alabama's or Ohio State's every week but we're always hungry,” he said.

The game was played for the first time at South Alabama’s new Hancock Whitney Stadium, with Miami Dolphins coach Brian Flores leading the National team and Carolina’s Matt Rhule coaching the American team. It also switched from the traditional North versus South format.

Fitzpatrick delivered in a short-handed group of receivers.

“We were a little bit low on receivers,” Flores said. "A couple of guys went out. Availability is key and he was available and able to capitalize on his opportunities.

Franks completed 9 of 16 passes for 122 yards. Carter averaged 8.0 yards per carry in his final season with the Tar Heels, and wasn’t far off in the all-star game.

He gained 60 yards on eight carries and had two catches for 15 yards.

Mond, Texas A&M's career passing leader, delivered a pair of touchdown passes in the third quarter to help erase a 13-0 halftime deficit. Mond even converted one two-point play with a run and the other with a pass, following touchdowns of 15 yards to Clemson’s Amari Rodgers and 14 yards to Tennessee’s Josh Palmer.

Newman competed 10 of 14 passes for 118 yards with a touchdown and interception. They were working behind an offensive line with only six available blockers much of the game.

“I thought when they had time they did a nice job,” Rhule said. "They made some plays under duress, made some big throws. Jamie took us down and scored at the end.

“I don't think you can really evaluate guys too much based upon a game with that many injuries. I think you need to look at the totality of the week, and I thought the guys were smart, they're good football players and this was a great step for them.”

The American team was without two of national champion Alabama’s biggest offensive weapons. Quarterback Mac Jones dressed out and went through warmups but didn’t play after injuring his left ankle in Thursday’s final practice.

“My ankle was still stinging a little bit,” Jones, who is a potential first-round pick, said on NFL Network. “I didn’t want to take any big risks.”

Tailback Najee Harris withdrew from the game after practicing Tuesday and Wednesday because of a lingering ankle injury from the national title game earlier in January.