FSU favored by a touchdown in annual clash with Miami 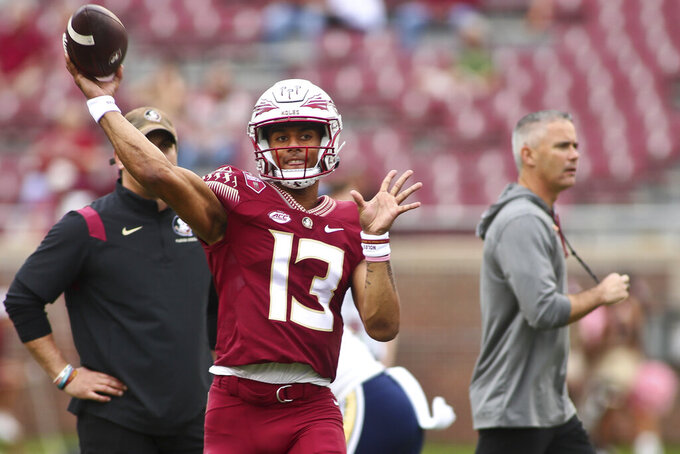 Line: Florida State by 7 1/2, according to FanDuel Sportsbook.

Florida State can clinch bowl eligibility, Miami can give its bowl hopes a major shot in the arm, but really this game is about bragging rights. The winner will be fueled by it for the next 365 or so days. The loser will have to carry it around for that long.

Florida State QB Jordan Travis vs. Miami’s secondary. Travis is having, by far, the finest season of his college career and is coming off a career-best 396 yards last week against Georgia Tech. He’ll face a Miami secondary that has been prone to giving up big plays. The Hurricanes cannot afford to give up many in this one.

Florida State: RB Trey Benson ran for 111 yards last week against Georgia Tech, and that kind of production — combined with the roll that Travis is on — creates a big 1-2 punch for the Seminoles.

Miami: DL Leonard Taylor had six tackles, four for losses, and 1.5 sacks last week in the four-overtime win over Virginia. He was disruptive, and the Hurricanes will need to see that sort of effort again Saturday.

The average score of a Florida State-Miami game: Seminoles 21.5, Hurricanes 21.3. ... Of the previous 66 meetings, 29 were decided by seven points or less, 20 decided by three points or less and there have been eight one-point games. (Miami is 7-1 in those games). ... Benson and Florida State teammate WR Mycah Pittman are facing Miami for the first time. They played for Hurricanes coach Mario Cristobal at Oregon. ... Including his time as a redshirt, a player, a grad assistant and an assistant coach, this will be Cristobal’s 12th Miami-Florida State game. The Hurricanes are 6-5 in the previous 11. ... In 30 meetings between 1978 and 2006, at least one team was ranked all 30 times going into the matchup, both teams entering the game ranked 23 times. But in the last 16 meetings, including Saturday, both teams have entered as ranked clubs only three times and this is the sixth instance of neither team being ranked.