Gabe Kapler, nerves and all, has been right fit for Giants 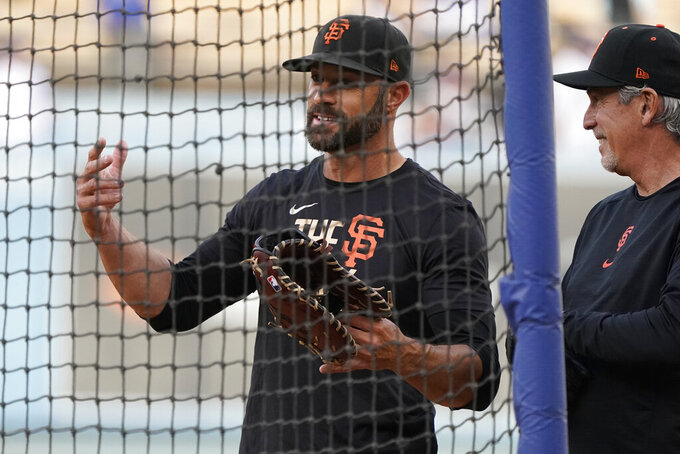 SAN FRANCISCO (AP) — Gabe Kapler repeatedly blew bubbles with his gum and popped them during his postseason managerial debut against the Los Angeles Dodgers, and oh does Dave Roberts remember his division counterpart doing that during their playing days in Double-A.

Kapler absolutely gets butterflies, he says, and he considers it a good thing. He's found a way to channel those into winning in San Francisco — a lot of winning — by making so many right moves all year long.

Now, the season comes down to a winner-take-all Game 5 for his Giants in the NL Division Series on Thursday night against Roberts and his defending World Series champion Dodgers. The postseason-tested, experienced manager in Roberts faces off against the newcomer Kapler, with all of his innovative approaches and a huge supporting cast of coaches.

Adrenalin, nerves, anxiety, call it what you want. Kapler embraces it all. He even talks them through with his son, Dane, who called recently before a football game and told his father about feeling those same emotions.

It used to be Kapler might pop a few extra pieces of gum when it came time to amp up for a game.

“I don’t have them now. I have had them, like butterflies or nerves and things like that,” Kapler shared leading into his first playoff game as a manager. “From a nerves perspective, I think nerves are really good.

"My son Dane tells me that he’s going to go play his college football game, he says, ‘I’m really, really nervous.’ I say: ’That’s great. Nerves are going to sharpen your focus. You’re a better decision-maker oftentimes if you can channel those.'”

Kapler has learned from his own failures, including two disappointing seasons managing the Philadelphia Phillies before he was fired.

After playing for the Red Sox through the 2004 World Series — Roberts' stolen base in Game 4 of the AL Championship Series with his team three outs from being swept by the Yankees will forever live in Boston lore — Kapler went to Japan and “had a very difficult time getting nerves, finding the nerves."

That was somewhat unnerving, to say the least.

“I'd get in the on-deck circle and my heart wasn't beating very fast,” Kapler reminisced. “I played terribly in Japan.”

Veteran catcher Buster Posey credits Kapler for staying “even keel” all season long, through significant injuries, Alex Wood and Donovan Solano contracting COVID-19 at the same time and all the other unforeseen challenges that could have derailed this record-setting club.

Kapler spent some time talking to a few of his coaches about Posey's year and how Adrenalin might have carried the veteran catcher through some big games, long nights and exhausting stretches as he kept playing behind the plate until the NL West was won on the final day.

Before the Giants' workout day last Tuesday, Kapler and his son spoke again about nerves and how much they matter. A college running back at the University of British Columbia, Dane Kapler talks to his father regularly before games.

“My dad has been telling me about the importance of nerves before my football games for basically as long as I’ve been playing,” Dane said. “We talk about how that nervous feeling you get is there for a reason, and that it actually helps you perform under pressure. I like to think about it from a survival perspective — your nerves are there before a hunt to let you know how important it is for your survival, and it elevates all the senses necessary to be successful.”

The Giants won a franchise-record 107 games this season, and Kapler has emerged as a great fit as the face of this organization that previously featured three experienced managers in Dusty Baker, Felipe Alou and then Bruce Bochy.

At 46, Kapler is doing things his way. That includes discussions on emotions and mental health with his players and grown son.

“Thinking about nerves in a positive light like this just helps me go into a game — or any other kind of performance — with more confidence," Dane Kapler said. "A lot of coaches will conflate nervousness with fear or lack of preparation, but I think that kind of mentality can really drag your confidence down. When you view nerves as a natural thing and as a good thing, it helps you maintain your confidence.”

Roberts, for one, has seen Kapler's pregame nerves at work for decades. They were Double-A teammates at Jacksonville in 1998 and then played together on the 2004 World Series champion Red Sox.

“When he gets like that there's more gum in his mouth,” Roberts recalled. “He chews a lot more gum. He's an intense guy. He certainly had ways to kind of combat that, or as he put it, embrace it. We all have kind of some type of Adrenalin and emotions that we have to corral to have clarity.”