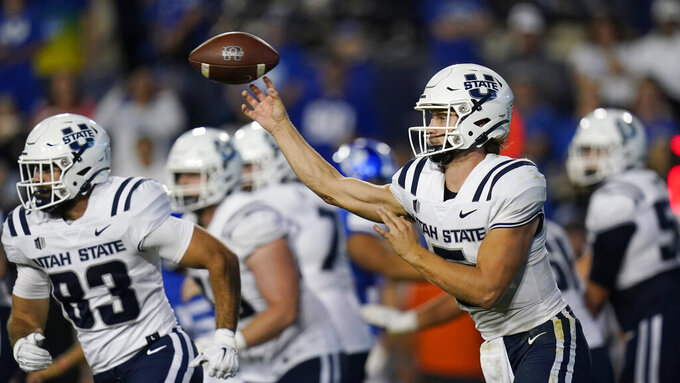 Utah State quarterback Cooper Legas throws a pass during the first half of the team's NCAA college football game against BYU on Thursday, Sept. 29, 2022, in Provo, Utah. (AP Photo/Rick Bowmer) 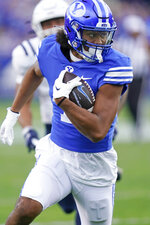 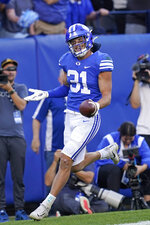 Jaren Hall threw for 273 yards and three touchdowns to help the No. 19 Cougars to a 38-26 victory over Utah State on Thursday night.

Hall, who favored his right shoulder after a late hit near the end of the third quarter, has thrown for at least 250 yards in nine consecutive games. Kody Epps finished with 86 yards and a touchdown on five catches. Christopher Brooks ran for 90 yards and a score on 11 carries.

BYU (4-1) beat Utah State (1-4) for the third straight time in the Battle for the Old Wagon Wheel. It wasn’t an easy task. The Cougars were blindsided early by energetic play by the Aggies on both sides of the ball.

“They were more physical than us. They had more energy than us,” BYU receiver Gunner Romney said. “It seems like they were more motivated to play. But luckily we went back and made some good adjustments at halftime and came out with a little more fire and we were able to get the job done.”

Cooper Legas threw for 188 yards and two touchdowns while adding 54 yards and another score on the ground to lead the Aggies. Legas, who filled in for injured starter Logan Bonner, also threw a pair of interceptions. Calvin Tyler, Jr. added 104 yards on 18 carries.

Bonner is sidelined with a season-ending foot injury, so Legas will be Utah State’s starting quarterback going forward after making his first career start against BYU.

“He’s waited for his opportunity and when it showed up, he did a phenomenal job,” Aggies coach Blake Anderson said. “I’m sure like any quarterback, there’s a couple of plays he’d love to have back. But, man, he gave us a chance to win.”

The Aggies lost their fourth straight game and fell to 6-65 against Top 25 teams.

Utah State took a 7-0 lead after Legas capped the Aggies’ opening drive with a 7-yard run. Things were on the verge of unraveling for Utah State after that early score.

BYU covered 65 yards in two plays — a 34 yard catch by Romney and 31-yard catch-and-run by Keanu Hill — to even the score. Then, Max Tooley reeled in a tipped pass from Legas and returned it 32 yards to give the Cougars their first lead at 14-7.

Utah State bounced back and shut down BYU’s offense after its initial drive. The Cougars went three-and-out on three consecutive possessions, opening the door for the Aggies to retake a 17-14 lead on a 14-yard catch by Brian Cobbs. BYU lost a total of nine yards on those three drives.

The Cougars found some life on offense again in the third quarter. Ethan Erickson snagged a high pass for a go-ahead 14-yard score to cap off BYU’s opening second-half drive. Then, on the Cougars’ next drive, Kody Epps caught three straight passes — culminating in an 8-yard score that extended BYU’s lead to 31-20.

BYU averaged 9.0 yards on 22 third quarter plays after totaling only 107 yards on 19 plays during the first half.

“We just came out with intent to keep the energy up and come out full speed, taking shots and trying to move the ball, get things rolling for our offense and help our defense,” Epps said. “When we make plays on offense, it helps our defense. Everything starts to mesh and fall together. That was the biggest thing.”

The Cougars finally got their running game going in the fourth quarter. Brooks scored on an 18-yard run to cap off six straight running plays and give BYU a 38-20 lead.

Utah State: Turnovers continued to be a problem for the Aggies. An interception return gave BYU its first lead early in the first quarter while a red zone fumble only a few seconds into the second quarter killed a potential scoring drive.

BYU: The Cougars’ running game woes resurfaced in the first half. BYU did not gain positive yardage on a running play until late in the second quarter and tallied minus-21 rushing yards before halftime. It was the fewest rushing yards in a half for BYU since tallying minus-28 rushing yards against Marshall in the second half of the 1999 Motor City Bowl.

BYU could move up in the AP Top 25 after winning its second straight game.