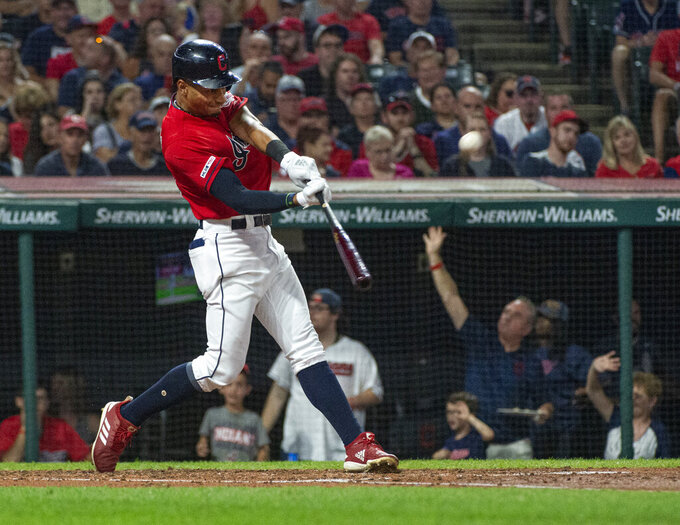 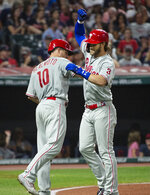 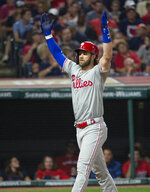 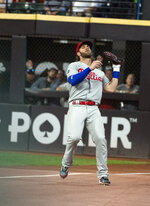 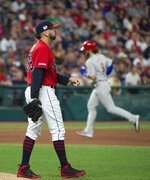 This time, it also meant something for Philadelphia's baseball hopes.

Harper delivered with one those moments that have made him a superstar, connecting for a go-ahead three-run homer as the Phillies avoided sliding deeper in the NL wild-card standings with a 9-4 win over the Cleveland Indians on Saturday night.

Brad Miller homered twice and the Phillies stayed within five games of Milwaukee for the second wild-card spot.

But it was Harper's 33rd homer in the fifth inning off left-hander Oliver Pérez (2-4) — a shot the Ohio State fan celebrated by flashing an "O-H" — that put the Phillies ahead and prevented them from fading further from the postseason picture.

Jay Bruce also homered in Philadelphia's four-run rally in the fifth and Jason Vargas (7-8) shook off a rough start to finally get his first win in his 10th outing for the Phillies.

Rookie Oscar Mercado hit a two-run homer for the Indians, who had their five-game winning streak stopped and fell one game behind Tampa Bay for the AL's No. 2 wild-card berth.

Harper's 413-foot shot was the type the Phillies envisioned when they signed the six-time All-Star to a 13-year, $330 million free agent contract in March.

After Indians rookie starter Zach Plesac gave up a pair of singles, manager Terry Francona didn't want to take any chances with Harper coming up and brought in Perez, who retired the superstar on a grounder in Cleveland's win on Friday and had struck him out four times in five career matchups.

But this time, Harper was locked in. He fouled off five pitches — two of them with two strikes — before pounding Perez's 79 mph slider deep into the right-field seats to put the Phillies up 5-4.

"I give him a ton of credit," Francona said. "I mean it's a guy that he has historically had a really tough time against and he fouled off enough pitches and he's a good enough hitter where he got something that was spinning and caught the plate and he hurt us.

When he circled the bases, Harper, who backs the Buckeyes football team because his wife played soccer at Ohio State, made a sign seen around the state on fall Saturdays. Earlier, Harper watched the Buckeyes on a clubhouse TV as they dismantled Miami (Ohio) 76-5.

Miller, who opened the season as Cleveland's starting second baseman, opened the ninth with a homer and Harper added a sacrifice fly in the inning as the Phillies blew it open with three runs.

Vargas settled in after his defense made two errors in the first and he fell behind 4-1 after two innings. The left-hander had been 0-3 with six no-decisions since coming over in a trade from the New York Mets on July 29.

Indians All-Star closer Brad Hand made his first appearance since Sept. 8 and struck out the side in the sixth. Hand had been sidelined by a fatigued arm, and the Indians wanted to use him in a non-save situation before he returns to late-inning duty.

"That was the bright spot," Francona said. "We'll see how he bounces back. That was really good to see."

Francona's 15 consecutive winning seasons is the majors' longest run since Hall of Famer Bobby Cox had 15 in a row from 1991-2005. Only Earl Weaver (16), Sparky Anderson (17) and Joe McCarthy (24) have had had lengthier streaks.

Phillies: SS Jean Segura (sore left ankle) returned after being a late scratch Friday. He was removed from Thursday's game in Atlanta after beating out an infield hit.

Indians: 3B Jose Ramirez looked good batting against right- and left-hander pitchers pregame, a significant step in his recovery from a broken right hand. Indians president Chris Antonetti said the team will see how Ramirez responds, adding "everything is on the table" when asked if the two-time All-Star could be activated as early as Sunday.

Phillies: RHP Vince Velasquez (7-7, 4.89 ERA) has won his past three decisions. He struck out eight in five innings in his last start.