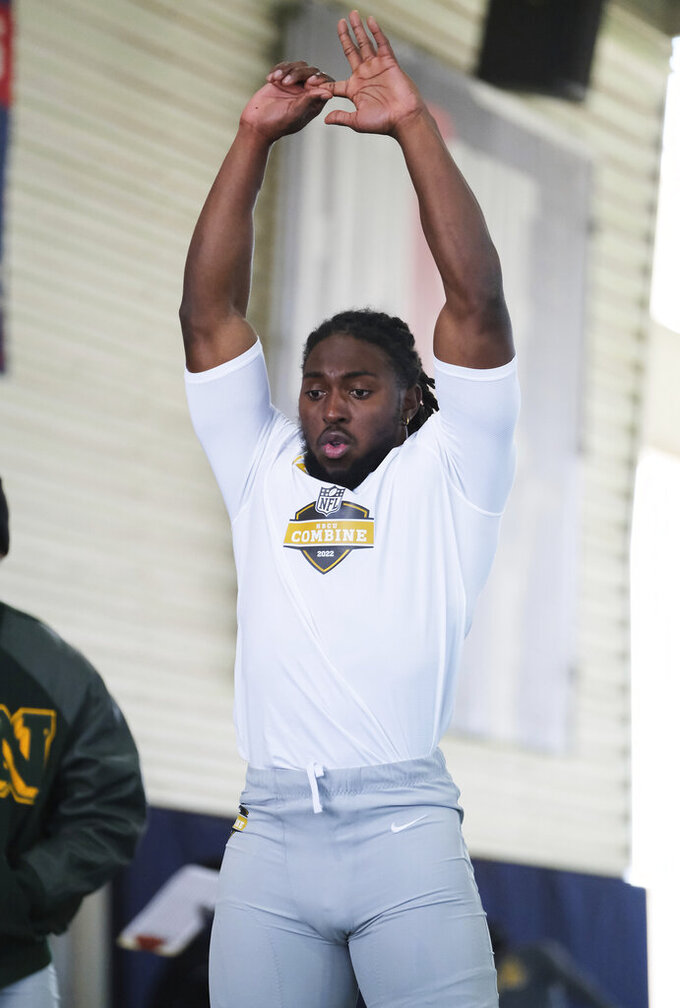 Alabama State running back Ezra Gray stretches out before doing a broad jump at the NFL HBCU Combine at the University of South Alabama in Mobile, Ala. on Saturday, Jan. 29, 2022. Nearly a year after no HBCU players were selected in the NFL Draft, Gray and other products of of historically black colleges and universities have somethig to prove. (Dan Anderson/AP Images for NFL)

MOBILE, Ala. (AP) — Javon Frazier and other HBCU players have something to prove in 2022, and more opportunity to prove it.

Nearly a year after none of their peers were selected in the NFL draft, Frazier and others participated in the first HBCU combine this past weekend, a week before Saturday's Senior Bowl.

After former NFL players-turned-HBCU coaches like Deion Sanders at Jackson State and Eddie George at Tennessee State helped raise the profile of Historically Black Colleges and Universities, players are hoping the combine boosts their chances in the upcoming April draft.

Having no players from an HBCU selected in the 2021 draft was painful for Frazier and others to watch.

“It did hurt a little bit,” said Frazier, a linebacker/defensive end from Division II Virginia State. “It was a little discouraging. But at the same time, I feel like HBCU players are going to have a chip on their shoulder now. Like, you didn’t draft one of us, I’m going to show you guys what you’re missing.”

They’re getting a chance.

The HBCU combine for a few dozen players drew representatives from all 32 NFL teams as a prelude to Saturday’s Senior Bowl, a showcase for senior or junior graduate prospects.

So players from HBCUs worked out in front of every NFL team, demonstrating their vertical leap and showing how fast they run the 40-yard dash, among other measuring sticks. They went through the same rigors as prospects from bigger schools do every year at the NFL combine and pro days.

The players also got to sit down with representatives of each NFL team, something some of them may not have had otherwise had a chance to do if they don't have pro days on their school campus.

“If it can create an opportunity for one player, it’s worth doing,” Senior Bowl executive director Jim Nagy said. “I think there was a lot more guys that are going to get an opportunity because of that.”

The NFL had scheduled an HBCU combine in the spring of 2020 but had to cancel it because of COVID-19. Nagy suggested doing one in conjunction with the Senior Bowl a few months earlier in the calendar instead, though last year's event was also called off.

The players will get another opportunity during the Legacy Bowl game for HBCU players in New Orleans on Feb. 19.

Both events may reverse a disappointing 2021 draft season for HBUC players.

Last year, not only were no HBCU players drafted but the number of free agent signings didn’t reach double digits. Only one HBCU player was selected in 2020, when Tennessee State’s LaChavious Simmons was a seventh-round pick.

Alabama State running back Ezra Gray is savoring the chance to showcase his ability that Power 5 players may take for granted.

The running back appreciated not just the chance to show his abilities on the field but the opportunity to interview with team officials. The three-time All-Southwestern Athletic Conference pick held a 4.0 grade-point average in computer information systems.

The Senior Bowl also will have two HBCU coaches working with each staff, including Virginia State’s Reggie Barlow.

Barlow played in the Senior Bowl coming out of Alabama State and played eight years in the NFL, including five with the Jacksonville Jaguars.

“You only get so many times in this life to show your stuff.”

Perhaps it will result in not only more HBCU players getting NFL shots, but coaches.

“Kudos to the NFL for them organizing this,” Barlow said. “And hopefully it’s something that will sustain, and hopefully we’ll have several guys get drafted and even more guys will have a chance to sign as free agents.”

Alabama State’s Gray knows the reality is there’s a huge pool of draft hopefuls, especially with the players who were granted an extra year of eligibility last year by the NCAA because of the pandemic.

But if none are drafted once again, “It definitely would be a shocker,” he said.