HBCUs work to return to sports amid new coronavirus 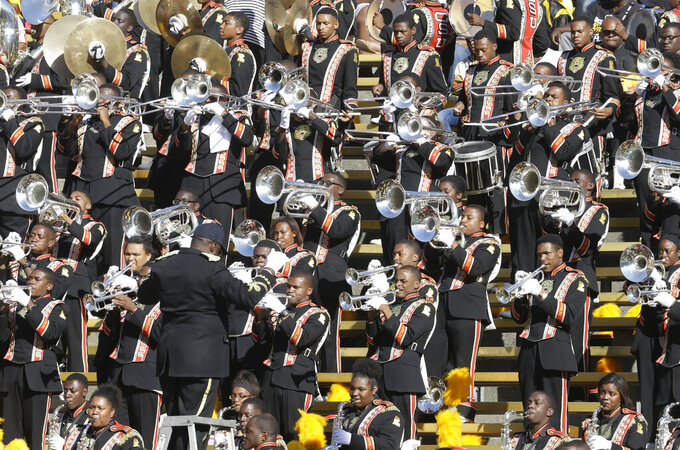 FILE - In this Sept. 5, 2015, file photo, Grambling State's marching band performs during the first half of an NCAA college football game against California in Berkeley, Calif. HBCUs in the Southwestern Athletic Conference have fared well economically so far despite the shutdown of sports because of the new coronavirus. But these programs could take a huge financial hit if fans are banned from football games this fall because of the pandemic. (AP Photo/Ben Margot, File)

In the 100 years since the Southwestern Athletic Conference was formed, the conference home for some of the nation’s most storied historically black colleges and universities has always found a way to do more with less.

So far, schools in the SWAC have avoided the salary cuts, furloughs and elimination of sports that institutions elsewhere have resorted to as the coronavirus shut down sports.

As the days tick by with no clear answer for what a football season might look like this year, SWAC Commissioner Charles McClelland is certain of one thing.

“If we don’t have fans in the stands, from a revenue perspective it’s going to be extremely difficult for us to have a football season,” he said.

Teams in the SWAC as well as many other HBCUs across the country play in the Football Championship Subdivision (FCS). Schools at this level earn some money from television contracts, but nothing like the multimillion-dollar deals for the Power Five.

In the SWAC, the main source of revenue from football comes from putting fans in the stands and there are no substitutes for that at schools that often have limited resources. The conference has led the FCS in average home attendance in 42 of the past 43 years at events where fans are entertained not only by the game, but the showmanship of their marching bands.

This fall, packing fans into stadiums at the 10 SWAC schools in five states from Texas to Alabama just might not be an option even if campuses are open.

McClelland said no decision has been made on the possibility of playing without fans.

“But I can tell you (in) the Southwestern Athletic Conference playing without fans would be a huge detriment to our overall business model, something we’d have to look at very significantly,” he said. “Because if we don’t have fans in the stands, it’s going to be difficult for us to pay the bills to put on our program.”

There are 107 HBCUs scattered across the country, and 21 of them play Division I sports, fielding teams in as few as 14 to as many as 18 sports each. Almost 6,000 students participate in sports at those institutions and thousands more play at the smaller HBCUs around the nation.

Prairie View A&M, which is located about 50 miles from Houston, led all HBCUs in sports revenue in 2018 by generating $18.6 million, according to the Knight Commission on Intercollegiate Athletics. But that revenue ranks 149th among all college sports teams.

To put it in perspective, the 21 Division I HBCUs generated about $214 million in revenue in 2018, while the University of Texas out-earned those schools alone, leading the nation in sports revenue with more than $219 million that year.

In the Mid-Eastern Athletic Conference, another conference with HBCUs that include Howard and Florida A&M, Commissioner Dennis Thomas oversees a committee looking at how sports can return at its schools.

“The intercollegiate world does not know what the forecast is going to be in September,” Thomas said. “We all are looking at different scenarios, different models. We all are trying to do our best to formulate financial policies, student-athlete policies just in case that we have a situation in the fall where it might be a reduced fall schedule.”

Another concern for the FCS conferences: If football returns but non-conference games are canceled, smaller schools could lose a fortune. Many of these schools earn significant amount of money to line up against Bowl Subdivision schools early in the season.

The SWAC has several such games on the schedule this year. Alcorn State, winner of the last two SWAC championships, is scheduled to open the season at Auburn on Sept. 5 with a team led by coach Fred McNair, brother of late Titans star Steve McNair, who also starred for the Braves.

Prairie View is set to visit TCU on Sept. 12 and Louisiana Tech on Sept. 19. Interim athletic director Alicia Pete said if the Panthers can't play those two games, the department would be forced to slash the budget. She's already spoken with the school's volleyball and soccer coaches to warn that they might have to cut their schedules to conference games only.

She also asked coaches of all 16 sports to submit plans with 20% budget cuts, just in case.

“If we're not able to have our game guarantees that's really going to impact our budget,” Pete said.

In the MEAC, some of the game-guarantee contests come on Sept. 12 when Bethune-Cookman has a trip to South Florida and Howard is set to visit Arkansas State. Thomas said his conference can't worry about the cancellation of those games yet.

“It's premature at this time simply because I think around the end of May or first of June we will get some lucidity in terms of what the fall will look like,” he said. “But if you were to extrapolate the impact of those guaranteed games for FCS, it would have a significant financial impact.”

The Central Intercollegiate Athletic Association is home to 12 HBCUs in five states that play Division II sports. Commissioner Jacqie McWilliams said the schools in her conference haven’t had to make any cuts yet, but noted the financial challenges of fielding the required 10 sports.

The pandemic also caused the CIAA to rethink its business model of distributing any extra funds it has at the end of the year to its schools to provide scholarships. The league routinely funnels about $1 million each year to schools for that purpose.

“We don’t keep a fund balance because that money goes back,” said McWilliams, who has been CIAA commissioner since 2012. “So, I think there’s a lot of conversations we’ll have with our board about whether we should be reserving some of those dollars a lot better.”