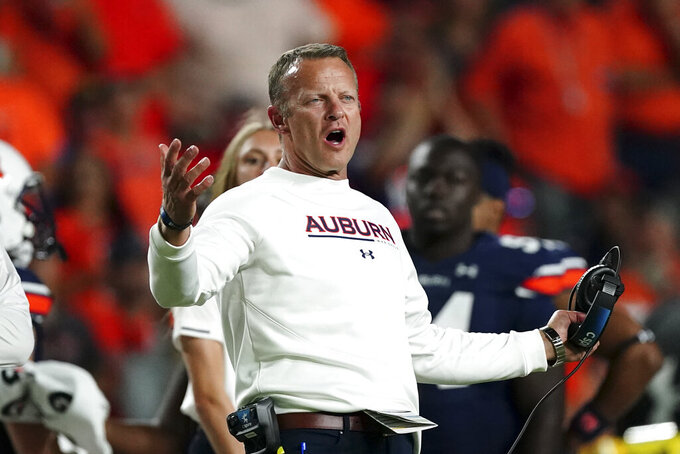 Will Anderson is one of the nation’s top pass rushers. Hendon Hooker has been among the hottest passers.

The Alabama linebacker and Tennessee quarterback headline the midseason Southeastern Conference awards released Wednesday by The Associated Press. Anderson is the top defensive player so far and Hooker grrabbed the offensive honors as the two players head into Saturday’s showdown between No. 3 Alabama and No. 6 Tennessee at Neyland Stadium.

The Volunteers' Josh Heupel was a unanimous pick as coach of the first half of the season in voting by AP reporters who cover the SEC.

COACH OF THE FIRST HALF

Heupel has Tennessee ranked in the top 10 for the fourth straight week and at 5-0 for the first time since 2016. Led by Hooker and the nation’s top offense, Heupel already has four wins over Top 25 teams in his first season and a half. That’s the most for a Volunteers coach through his first 18 games since Phillip Fulmer also beat four Top 25 teams three decades ago.

Hooker has been the SEC’s most efficient QB, passing for 1,432 yards and 10 touchdowns without an interception through five games. He became the first SEC quarterback to post 300 passing yards and 100 rushing yards in a game since 2018 (vs. Florida). He’s eighth nationally and second in the SEC in total offense, averaging 332.6 yards a game.

Ole Miss RB Quinshon Judkins, who has emerged as probably the biggest star in a talented backfield despite not starting. He has run for 581 yards and eight touchdowns, more TDs than any other FBS freshman runner.

Jaxson Dart, QB, Mississippi. Dart started the season rotating with Luke Altmyer after transferring from USC. It’s unquestionably his job now, even before his 448-yard, three-touchdown explosion against Vanderbilt. Dart has passed for 1,358 yards and eight touchdowns while also being intercepted five times. He has run for 256 yards.

Tennessee has risen from just outside the preseason poll and into the top 10, with victories over Pittsburgh, LSU and Florida. The Volunteers showed signs last season of being on the verge of a breakout, even while going 7-6. Their biggest test so far awaits Saturday, though.

Arkansas RB Raheim Sanders, who is the SEC's leading rusher and top workhorse. He has run for 695 yards and five touchdowns on 125 carries. Sanders also has 185 receiving yards. He had a strong freshman season, too, but has already topped his 578 yards from 2021.

Texas A&M is now unranked after opening the season at No. 6. The Aggies are 3-3 with losses to Appalachian State, Mississippi State and Alabama. The offense especially has been inconsistent and quarterback Max Johnson missed the Alabama game with an injury to his throwing hand.

Auburn coach Bryan Harsin has never climbed out of the late-season slump or shed the lingering cloud from the school investigation into his program that followed. Auburn has blown a 17-point lead to LSU and been routed by Georgia. The big question: Will he make it to the end of the season?

Alabama QB Bryce Young. The 2021 Heisman Trophy winner has missed the last six-plus quarters with an injury to his throwing shoulder. The Tide offense clearly wasn’t the same without him, even though Jalen Milroe flashed a strong arm and running ability. He’s one of several QBs missing time lately with injuries.