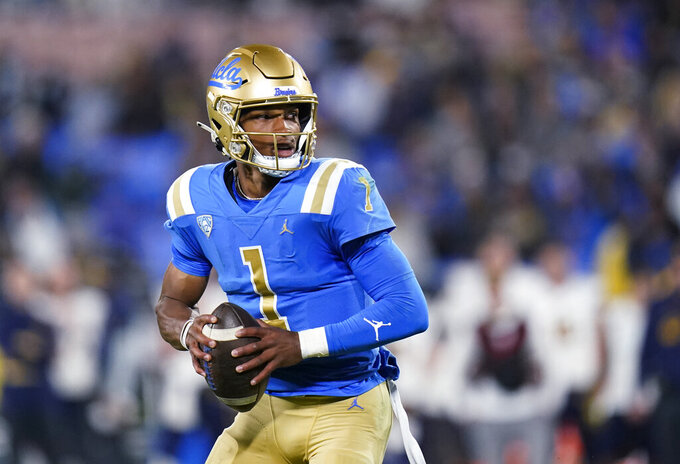 FILE - UCLA quarterback Dorian Thompson-Robinson pulls back to throw a pass during the first half of an NCAA college football game against California on Nov. 27, 2021, in Pasadena, Calif. Thompson-Robinson was voted to The Associated Press All Pac-12 team on Friday, Dec. 10. (AP Photo/Jae C. Hong, File)

SAN DIEGO (AP) — The Holiday Bowl became the fifth postseason college football game to be canceled when UCLA was forced to pull out just hours before Tuesday's kickoff because of COVID-19 issues with the team.

The Bruins were scheduled to face No. 18 North Carolina State at Petco Park, the home of the San Diego Padres.

A surge in COVID-19 cases across the country has disrupted a second straight bowl season.

The Hawaii, Military, Fenway and Arizona bowls have already been canceled due to virus outbreaks leaving teams without enough available players. The Sun and Gator bowls have had to scramble to find replacement teams for their games.

North Carolina State is the fifth Atlantic Coast Conference team to have its bowl disrupted by the virus.

Miami, Virginia and Boston College all had to withdraw from their games. Wake Forest is set to play in the Gator Bowl, but will face Rutgers instead of Texas A&M as originally scheduled.

NC State athletic director Boo Coorigan called it "an incredibly frustrating outcome for our players and staff who worked so hard to put themselves in position to get a 10th win. The timing of the announcement in proximity to kickoff was very disappointing."

He said NC State has been in contact with numerous teams about playing a game but did not say when or where that might be.

Coaches Dave Doeren of NC State and Chip Kelly of UCLA spoke Monday about tightening protocols to assure their game would be played. The cancellation has to have stung the Wolfpack, whose goal was to finish with double-digit wins for just the second time.

"Prevention’s the best medicine right now,” Doeren said then. “Our guys have been through this. They understand how to follow protocols ... to protect the mission. We’re here to try to win our 10th game. That’s happened one time in school history. There’s a lot at stake.

UCLA's football team is the fourth Bruins program sidelined due to COVID-19 issues, joining both basketball programs and gymnastics.

Petco Park had to be modified so a football field would fit. The Holiday Bowl needed a new home after 70,000-seat SDCCU Stadium was razed to make room for San Diego State's new stadium.

Meanwhile, the Big Ten became the latest conference to tweak its forfeit policy, joining the other Power Five conferences, the Big East and most others. The Big Ten said games won't automatically be forfeited if a team or teams are unable to participate due to COVID-19. Instead, games can be rescheduled, declared a no contest or a forfeiture.

The Atlantic 10 also revised its COVID-19 forfeit policy. The A-10 medical advisory committee will meet Wednesday to review the newest CDC policy reducing the isolation days of asymptomatic vaccinated individuals from 10 to five days.

Several basketball games across the country have been affected.

Indiana canceled its game Wednesday against UNC Asheville. while the Temple-Villanova game scheduled for Wednesday has been postponed. San Diego postponed its home game against No. 4 Gonzaga on Thursday night,

The No. 12 Texas women’s game Wednesday night against Alcorn State has been canceled.

Since the season began on Nov. 9, about 150 men’s Division I basketball games and more than 130 women’s D-I games have been canceled or postponed due to COVID-19. The majority of them came after mid-December, with a few already stretching into the new year.