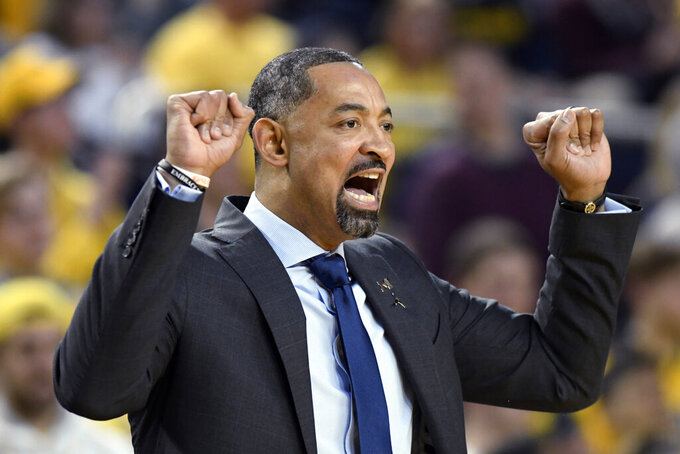 Michigan coach Juwan Howard calls in a play to the team as it played against Nebraska during the first half of an NCAA college basketball game Thursday, March 5, 2020, in Ann Arbor, Mich. (AP Photo/Jose Juarez)

There may still be an adjustment period.

The Wolverines enter the 2020-21 season with plenty of talented upperclassmen. Included in that group are a couple transfers who could make a significant impact, but the question is how quickly the team can mesh.

“I would say the strength of our team is we have experience on all levels at all positions," Howard said. "It’s great to have that experience on a team — yes, even though some of them are new guys, some haven’t played together.”

The Wolverines were 19-12 when last season was halted because of the coronavirus pandemic. It would have obviously been easier to evaluate Howard's first season at the helm if Michigan had been able to play through the postseason, but the focus now is on 2020-21.

Michigan lost seniors Zavier Simpson and Jon Teske, but forward Isaiah Livers and guard Eli Brooks are back this season as seniors, and forward Austin Davis returns as a grad student for his fourth year of eligibility.

The Wolverines also brought in guard Mike Smith, a grad transfer from Columbia, and guard Chaundee Brown, a senior who transferred from Wake Forest. Brown was granted immediate eligibility this season.

Guard Franz Wagner, who averaged 11.6 points per game as a freshman last season, is back. Both he and Livers passed on the NBA draft to return to Michigan.

The Wolverines had solid enough results on the court last season, but what's really driven some of the optimism about Howard's tenure is recruiting. Michigan currently has the No. 1-ranked recruiting class in the country for 2021, according to 247Sports. The 2020 class arriving this season is ranked 15th in the nation and No. 1 in the Big Ten.

“I don’t get into the ratings of No. 1 classes and stuff like that," Howard said. "I let whoever does that decide. I just go after guys that I feel that fit our culture.”

Hunter Dickinson, a 7-foot-1 center, is part of this season's freshman class, along with guard Zeb Jackson and forward Terrance Williams. Jace Howard, Juwan's son, is also a freshman for the Wolverines.

Livers averaged 12.9 points per game last season and shot 40% from 3-point range. He played only 21 games because of injury problems.

“Everyone listens to him and respects him, because he’s a guy, he comes from a pure place with a big heart, and his talent level is exceptional," Howard said. "The only thing with him was, he just had a little bad luck with injuries.”

In 2017-2018 and 2018-2019, Michigan ranked in the top three in the country in adjusted defensive efficiency, according to kenpom.com. Last season, the Wolverines dropped to 28th, and Michigan now has to replace a defensive standout in Simpson.

Wagner was definitely a contributor last season, but he has some room for improvement after shooting just 31% from beyond the arc. Smith averaged 22.8 points a game last season at Columbia, and Brown averaged 12.1 points for Wake Forest.

Michigan is supposed to host N.C. State on Dec. 9 as part of the ACC/Big Ten Challenge. Beyond that, there hasn't been much clarity on the schedule. Howard said the pandemic is a factor — a lot depends on what type of schedule teams can safely play.

“I'm speaking of players, coaches, support staff, and then more importantly, opponents,” he said. "We've seen it, just recently where, in football, the Big Ten conference season, where there have been postponed games.”