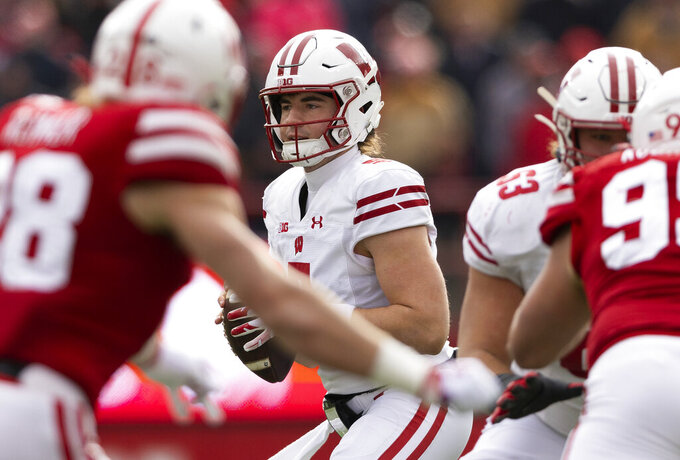 Wisconsin quarterback Graham Mertz sets up a pass against Nebraska during the first half of an NCAA college football game, Saturday, Nov. 19, 2022, in Lincoln, Neb. (AP Photo/Rebecca S. Gratz)

The winner gets Paul Bunyan’s Axe, a trophy that has gone to the victor of this annual rivalry game since 1948. After knocking off Wisconsin 23-13 last year, Minnesota is seeking to beat the Badgers in back-to-back seasons for the first time since 1993-94. Wisconsin is seeking a seventh victory that would clinch a winning season.

Minnesota RB Mohamed Ibrahim vs. Wisconsin run defense: Ibrahim has rushed for 1,524 yards this season and leads all Football Bowl Subdivision players with 152.4 yards rushing per game. He’s coming off a 263-yard performance in a 13-10 loss to Iowa. Ibrahim must get past a stingy Wisconsin defensive line featuring NT Keeanu Benton. Wisconsin allows just 3 yards per carry to rank fourth among all FBS teams. The Badgers have given up 103.73 yards rushing per game to rank 11th.

Minnesota: S Tyler Nubin is second on the Gophers with 55 tackles, leads the team with four interceptions and has three pass breakups and a forced fumble this season. He’ll make his 31st career start, perhaps for the final time in maroon and gold. The native of St. Charles, Illinois, has one year of eligibility remaining, but he participated in Minnesota’s senior day ceremony last week and is an NFL draft prospect whose stock has been rising.

Wisconsin: RB Braelon Allen has taken plenty of hits this season but has withstood the bruising to rush for 1,126 yards and 10 touchdowns. Minnesota limited Allen to 47 yards on 17 carries last season, ending a streak of seven straight rushing performances of at least 100 yards. Allen has been banged up lately, which could lead to more carries for Chez Mellusi.

Ibrahim needs to rush for 103 yards to break the Minnesota single-season record of 1,626 that David Cobb set in 2014. Ibrahim has 4,527 career yards rushing and needs 128 more to pass Darrell Thompson for that program record. … The two teams have split their last four matchups. That follows a Wisconsin 14-game winning streak over Minnesota from 2004-17. … Wisconsin OLB Nick Herbig, who leads all FBS players in sacks per game (1.1) must sit out the first half of this game after getting penalized for targeting in the second half of the Nebraska game. … Wisconsin has a 4-2 record under interim head coach Jim Leonard, who was promoted from defensive coordinator after the firing of Paul Chryst.