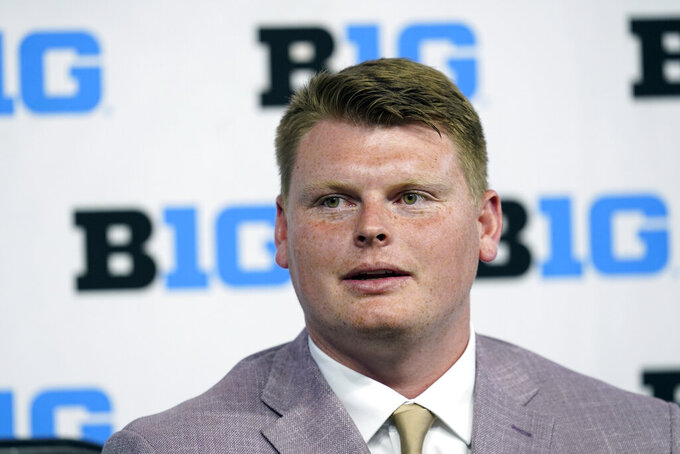 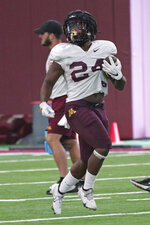 MINNEAPOLIS (AP) — Mohamed Ibrahim started asking some of his fellow seniors near the end of last season about returning to Minnesota for one more year, a star running back unsettled by the feeling of finishing his college career because of a torn Achilles tendon.

The responses he collected made the decision clear. Once Ibrahim announced he would sign up for a sixth season, quarterback Tanner Morgan, center John Michael Schmitz and wide receiver Chris Autman-Bell followed suit soon after.

“I came back for my teammates,” Ibrahim said. "Without my teammates I wouldn’t be here, so why not give it one more shot?”

They've nicknamed themselves the “Encore Four,” these super seniors who've been with the Gophers since coach P.J. Fleck arrived in 2017. Morgan, Schmitz and Autman-Bell were committed first to Western Michigan, before opting to follow Fleck to a power conference program.

Ibrahim, who had also been recruited by Fleck when he was with the Broncos, was the catalyst for bringing the band back together on offense for another run at a Big Ten West Division title. Ibrahim is eighth on Minnesota’s career rushing list with 3,003 yards in 29 games, presented a golden opportunity to catch Darrell Thompson (4,654) for the all-time lead.

“It means the world to us that he’s coming back. He’s at full strength. He’s ready to roll, and we’re excited about having him have a really, really positive 2022,” Fleck said.

The buildup for the season opener won't match last year, when the Gophers hung with fourth-ranked Ohio State before losing Ibrahim to the gruesome injury and falling 45-31. Still, the first game on Sept. 1 against New Mexico State comes with quite the twist.

The new head coach of the Aggies is none other than Jerry Kill, whose seizure disorder forced him to leave the Gophers midway through the 2015 season. Kill has taken several positions at other schools in administration or coaching, but this is his first time running a team after Minnesota. The Gophers are 37 1/2-point favorites by FanDuel Sportsbook odds.

Morgan is one of several Big Ten quarterbacks this year with ample starting experience, having taken over the job midway through the 2018 season. Morgan has reunited with offensive coordinator Kirk Ciarrocca, who returned after two years elsewhere, and in an even happier offseason development returned as a married man. He and wife Sarah were wed on July 9.

With Ciarrocca focused on reviving a passing attack that lagged in his absence amid the departure of NFL draft picks Tyler Johnson and Rashod Bateman, Autman-Bell leads a promising group of wide receivers including Dylan Wright, Daniel Jackson and Michael Brown-Stephens. The Gophers have big plans for 6-foot-7 tight end Brevyn Spann-Ford, too.

“Sometimes I pinch myself that I’m in this situation,” Morgan said.

Schmitz is widely considered Minnesota's top NFL prospect, but both starting guards and tackles have departed with 181 career starts between them. Fellow sixth-year man Axel Ruschmeyer is the new left guard, and left tackle Aireontae Ersery is one of the program's most touted underclassmen. Michigan transfer Chuck Filiaga has taken over at right guard. There's a three-way competition at right tackle between Notre Dame transfer Quinn Carroll, J.J. Guedet and Martes Lewis.

The other side of the ball is unproven up front, too, with little experience beyond defensive end Thomas Rush and defensive tackle Trill Carter.

“We’re deeper on the d-line than we’ve ever been, so instead of having eight guys, we might have 11 guys," Fleck said. “It's going to be hard and sit there and say, ‘This is just the starters.’”

Jordan Howden and Tyler Nubin give the Gophers a combined 56 starts at the two safety spots, and Justin Walley will be one fixture at cornerback. Others heavily in the mix at that position are Western Kentucky transfer Beanie Bishop, Abilene Christian transfer Ryan Stapp and fifth-year player Terell Smith. The Gophers were second in the Big Ten and eighth in the FBS last season with an average of 181 passing yards per game allowed.

Minnesota's schedule is backloaded again, hosting Iowa on Nov. 19 and visiting Wisconsin on Nov. 26 in a pair of games sure to shape the West Division race. This is the third straight year the Gophers won't face their two fiercest rivals until Nov. 13 or later.

Two road trips stand out over the first 10 contests: at Michigan State on Sept. 24 and at Penn State on Oct. 22. The Gophers could well be favored to win the other eight games. Western Illinois and Colorado visit, followed by Purdue on Oct. 1, Rutgers on Oct. 29 and Northwestern on Nov. 12.