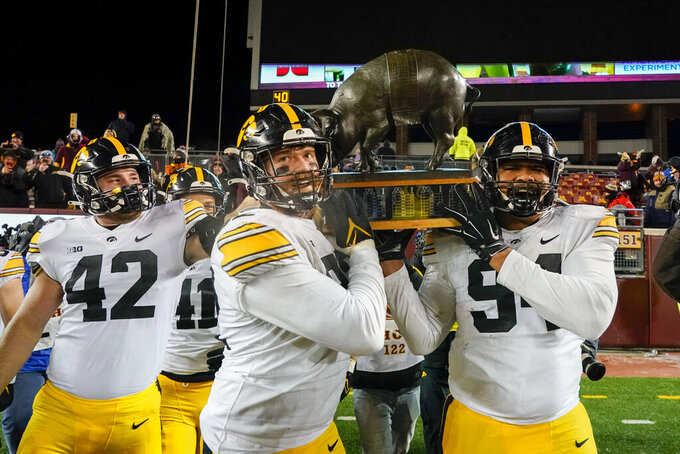 MINNEAPOLIS (AP) — Iowa's normally dominant defense was trampled all afternoon, in a timeless and tireless performance by Mohamed Ibrahim and the Minnesota offensive line.

Jack Campbell and the Hawkeyes just kept fending off any feeling of defeat and focused on finding the ball.

Drew Stevens made a 21-yard field goal with 28 seconds left to lift Iowa in a 13-10 victory on Saturday, after the Hawkeyes forced two late turnovers to take control of the Big Ten West with their eighth straight win over the Gophers for the Floyd of Rosedale trophy.

“We’re not going to give up, ever,” said Campbell, who caused a fumble by Ibrahim with 5:07 remaining at the 9-yard line and came up with an interception off a tipped pass with 2:06 left to put Iowa (7-4, 5-3) in position for the winning kick — and a repeat as division champions.

The Hawkeyes will return to the conference title game by beating Nebraska next week.

“Not everything’s pretty, but I’m just so proud of our guys,” Campbell said. “No one ever believes in us, so just keep doing it.”

They're tied for first place with Purdue with a tiebreaker in hand after beating the Boilermakers two weeks ago. Two weeks before that, Iowa looked bound for a minor bowl game at best after scoring 10 points or less in four of its first seven games.

“I don’t know anything about gambling, but I’m guessing if you put 10 bucks on us four weeks ago, you’d probably be OK," Iowa coach Kirk Ferentz said.

The over-under fell to 31½ points on Friday, according to FanDuel Sportsbook, the lowest ever posted for an FBS game.

Ibrahim rushed for a career-high 263 yards and a touchdown on 39 carries, but the soft-spoken star was particularly subdued afterward following just his fourth lost fumble in 846 career touches. His third-and-4 outside zone run would have moved the chains, but Campbell knocked the ball out and Deontae Craig recovered it.

“They overran it. I cut it back. I was like a yard short from the first down. I wanted to fall forward, and it popped out,” said Ibrahim, who had his 19th straight 100-yard rushing game.

Minnesota (7-4, 4-4) forced a three-and-out and took over with 4:11 to go. Ibrahim ripped off a 19-yard run to the Iowa 36. Three plays later, Athan Kaliakmanis — making his third career start — threw a slant to fellow redshirt freshman La’Meke Brockington that Riley Moss reached to deflect. Campbell snagged it returned it 30 yards. He would have scored, but his right foot was ruled out — barely — at the 45.

“We've got to be hard to kill out there,” linebacker Seth Benson said. “Bend, don't break.”

Spencer Petras, who scored on a first-quarter quarterback sneak and went 15 for 24 for 221 yards, hit Luke Lachey for 33 yards on the next play. That put the Hawkeyes in range for their freshman kicker, who made a 38-yarder in the first quarter.

This was Iowa’s 14th straight win in November, a streak started against Minnesota in 2019 after a loss at Wisconsin. The Hawkeyes are on their longest winning streak in the history of the series against the Gophers, who still lead 62-52-2.

Kaliakmanis started again for Tanner Morgan, who suffered an unspecified upper body injury while taking a sack two weeks ago after a similar hit forced him out last month and kept him from playing the following game. Morgan, who's second in program history in passing yards, was one of 15 departing players honored with their families in the traditional senior day ceremony.

Petras hit Sam LaPorta, the Big Ten's leading receiver among tight ends, four times for 95 yards in the first quarter including a 58-yard gain off a middle screen on Iowa's first snap. LaPorta suffered a leg injury and did not return. Lachey had five receptions for 77 yards in his place.

This was the second-coldest kickoff temperature (17 degrees) for a Gophers game since they opened the stadium in 2009, behind a 15-degree afternoon in 2015 against Ohio State. The windchill factor at the start was 1 degree. Stevens needed a holder for his second kickoff.

Iowa: The Hawkeyes were gashed at the line of scrimmage all game and missed numerous tackles, but their nose for the ball is part of playing defense, too, and proved to be the deciding factor.

Minnesota: Right before Matthew Trickett missed a 34-yard field goal with 38 seconds left before halftime, Kaliakmanis rolled out on third-and-1 and, under pressure by Campbell, missed a wide-open Brevyn Spann-Ford at the sideline. Moss almost intercepted the throw for Brockington at the goal line, and Kaliakmanis went just 1 for 8 for 14 yards in the second half.

“The pick, that was catastrophic. But I thought he managed it well. I thought he pulled it when he needed to pull it. He got us out of some really tough situations. He was really accurate in the first half," Minnesota coach P.J. Fleck said.

Iowa plays at Nebraska on Friday, on a seven-game winning streak over the Huskers.

Minnesota plays at Wisconsin next Saturday, seeking a second straight victory over the Badgers for the first time since 1993-94.