Iowa visits Minnesota with Big Ten West in play, and the pig 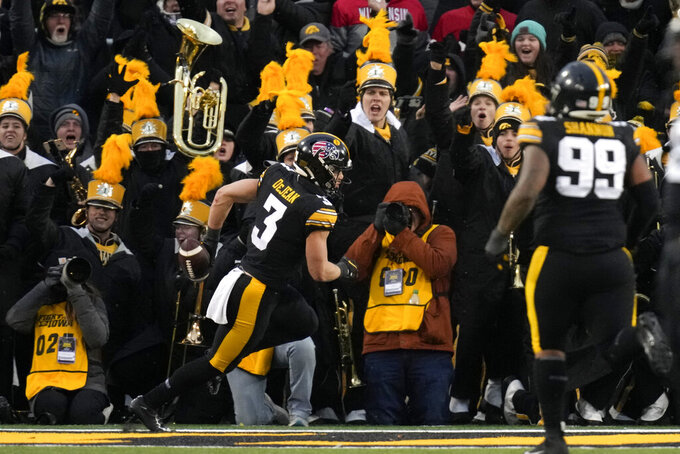 Iowa defensive back Cooper DeJean (3) celebrates after returning an interception for a touchdown during the first half of an NCAA college football game against Wisconsin, Saturday, Nov. 12, 2022, in Iowa City, Iowa. (AP Photo/Charlie Neibergall)

The West Division title is back in play in for both teams with each on three-game winning streak. The Hawkeyes and Gophers are in a four-way tie for first place with Illinois and Purdue, putting Iowa in prime position for a repeat trip to Indianapolis by beating Minnesota because of a head-to-head tiebreaker over Purdue. Illinois beat both Iowa and Minnesota but must play Saturday at No. 3 Michigan. The Gophers, who have never made it to the Big Ten championship game, lost to Purdue. Just as important to Minnesota is the Floyd of Rosedale Trophy that Iowa has owned for seven straight years.

Iowa DBs vs. Minnesota WRs. The Gophers have struggled to generate consistent production from their pass-catchers since sixth-year standout Chris Autman-Bell suffered a season-ending injury in their third game. Daniel Jackson has 14 receptions for 173 yards over the last three games. The status of Gophers QB Tanner Morgan remains uncertain. He has missed two of the last four games with an upper body injury, and freshman Athan Kaliakmanis filled in capably.

Iowa: CB Cooper DeJean is coming off the best game of his career. He returned an interception for a touchdown, made 10 tackles and set up another score with a 41-yard punt return against Wisconsin. He’s second in the Big Ten with four interceptions.

Minnesota: C John Michael Schmitz was named this week as one of seven semifinalists for the Outland Trophy, given annually to the nation's outstanding interior lineman. Schmitz is the top-ranked center among Power 5 teams by Pro Football Focus.

Iowa coach Kirk Ferentz said starting WR Arland Bruce returned to practice Monday and has a chance to play after missing last week’s win over Wisconsin with an undisclosed injury. Bruce's father played for Minnesota and had a touchdown in the 1999 game that was the last time the Gophers won at Iowa. ... Hawkeyes RG Beau Stephens, who has started every game, is questionable after a helmet-to-helmet collision with a Wisconsin player. Nick DeJong is in line to start instead. … Iowa RB Kaleb Johnson, who has 610 rushing yards, needs 29 more to break the school freshman record set by Tyler Goodson in 2019. … Minnesota RB Mohamed Ibrahim leads the FBS with 18 rushing TDs and has a streak of 18 straight games with at least 100 rushing yards.