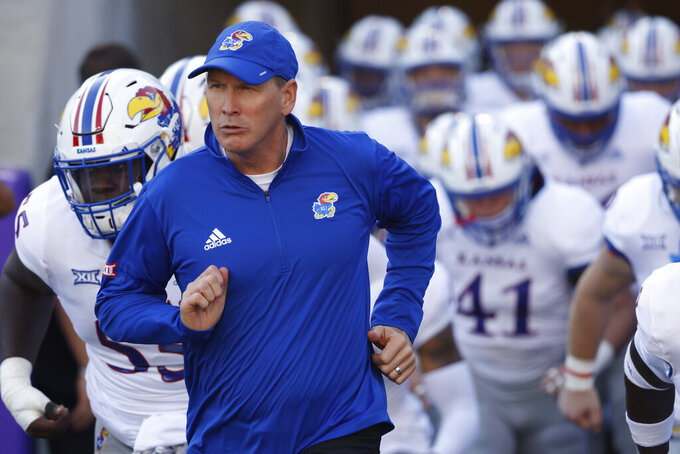 FILE - Kansas head coach Lance Leipold takes the field with his team before playing TCU in an NCAA college football game Saturday, Nov. 20, 2021, in Fort Worth, Texas. Leipold took over the football program at Kansas after a winless season and a somewhat scandalous departure of his predecessor, Les Miles. And while the long-time small-school coach won just twice in Year 1, he is full of optimism heading into fall camp this season. (AP Photo/Ron Jenkins, File)

LAWRENCE, Kan. (AP) — Lance Leipold first walked into the head coach's office at Kansas, arguably the worst program in Division I football, amid terrible circumstances and during a time of the year that only made everything worse.

The Jayhawks were coming off a winless 2020 season under Les Miles, who had then resigned in ignominy amid a flurry of sexual harassment allegations dating to his time at LSU. The scandal also led to the departure of athletic director Jeff Long, leaving the entire program in turmoil during a crucial recruiting period and all the way into spring practices.

Leipold never even conducted a practice with the Jayhawks until the start of fall camp last year.

So even though they proceeded to win just two games in his debut, extending their streak of losing seasons to unlucky No. 13, the point at which Leipold is starting off this fall is a whole lot better than where he stood a year ago.

“There's so many things that are different for the better,” Leipold said. “We've said many times, player know the coaches, know what to expect. We still have a fair amount of new guys going through their first practice, and there's uncertainty and wandering around — Where do I go next? — everyone is understanding and we're in a much better spot.”

The long-time small-college coach pauses for a moment and thinks back to last season.

“Last year, two or three weeks into training camp we were still evaluating,” Leipold recalled. “We have an idea now. We still may be evaluating, but we're developing at the same time. That's a good feeling.”

The challenge now is turning development into success.

Six coaches have failed to produce a winning season since the Jayhawks went 8-5 under Mark Mangino in 2008, and none managed more than one conference win. That includes Charlie Weis, who arrived in Lawrence flashing Super Bowl rings, and Miles, who won a national championship with the Tigers.

The 58-year-old Leipold is about substance more than style, though, and that could be exactly what the Jayhawks need to climb the Big 12 standings. He cut his teeth at his alma mater, Wisconsin-Whitewater, going 109-6 and winning six national titles in eight seasons at the Division III school, then turned around a lowly Division I program at Buffalo.

Leipold accomplished all of that by being the antithesis of so many young, hotshot coaches across major college football whose success is largely tied to their ability to recruit five-star prospects. He is a football coach in the truest sense, rather than the CEO of a corporation, and hangs his battered cap on his ability to take good players and make them great.

He'd rather be on the practice field with his hand in the dirt than poring over spreadsheets in his office.

“There's expectations, you know? There's really no gray. There's black and white,” said Kansas defensive end Sam Burt, who is on his third coach after starting his career with David Beaty. “You can see he knows what he's doing. The whole coaching staff knows what it's doing. And like I said, there's no gray. It's always like this or that, if that makes sense.”

It makes perfect sense if you know Leipold's career arc.

He spent time at Doane, an NAIA school in Nebraska, and Nebraska-Omaha, whose football program no longer exists. And the two stints Leipold had at the Division I level were under two more consummate coaches: He was a graduate assistant to Wisconsin's Barry Alvarez in the early 1990s and worked with Frank Solich at Nebraska in the early 2000s.

“Where we're going, how we're doing it — that was Year 1,” Leipold said. “Now I think this group has a determination about them in how they want to approach things and change the direction of this program.”

There was unmistakable progress last season, highlighted by a dramatic overtime win at Texas, and a full recruiting cycle coupled with a productive spring program have only carried that momentum forward.

“It feels way different, just how we attack everything: the tempo, the pace, the excitement,” Jayhawks safety Kenny Logan said. “We believe in what we’ve done this offseason. We don’t want to go through (another rebuild).”

Rather, the Jayhawks want to finish off this one.

That task continues Sept. 2, when they open their season against Tennessee Tech. Then comes back-to-back road games against Big 12 foe West Virginia and future conference rival Houston before another non-league game against Duke.

Those four games should help to tell whether Leipold is on the right track.

“We’re not in the moral victory business and we understand that completely,” Leipold said. “But we’re always looking at, whether it be individual improvement in certain things, how we’ve gone about our daily business and really how we’ve connected dots with our players about becoming better holistically, whether it be weight room or academically and better leadership, better teammates, that these things are going to stack upon themselves and help us on game day.”