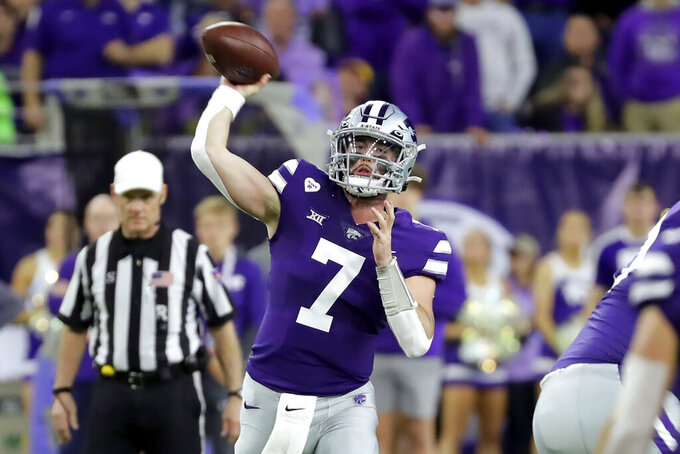 HOUSTON (AP) — Deuce Vaughn and the Kansas State Wildcats finished a streaky season on a positive note Tuesday night with a dominant 42-20 win over short-handed LSU in the Texas Bowl.

Vaughn, a sophomore running back and first-team All-American as an all-purpose player, rushed for 146 yards on 21 carries. He scored four touchdowns — three rushing and one receiving.

“The aggressiveness of our play calling opened up the running game,” Vaughn said. “Everybody was making plays, and our O-line stayed committed to the fight against a really good defense.”

Kansas State (8-5) also got a strong performance from quarterback Skylar Thompson, who returned to make his final collegiate start after missing the regular-season finale with an ankle injury.

“For him to be on point like he was and throwing strikes, he was phenomenal,” Kansas State coach Chris Klieman said. “To see him go out like that was huge. He wanted to play well in this moment and he did.”

“It flew by, but it was a special way to end it, for sure,” Thompson said. “Holy smokes, I couldn’t have drawn up a better way to finish it than tonight.”

While LSU (6-7) had a tough time slowing Vaughn and Thompson, the Tigers had another uphill battle on offense.

With starting quarterback Max Johnson having transferred to Texas A&M, backup Myles Brennan recovering from surgery and a third-string freshman that would have had to burn his redshirt to play, LSU entered the game with a big question mark under center.

The Tigers turned to senior receiver Jontre Kirklin, who hadn’t played quarterback since high school in 2016. Kirklin had only played in 25 games over five seasons, including his first two years as a cornerback.

The Tigers didn’t get a first down until late in the second quarter. By that time, Kansas State already had 12 first downs and a 21-0 lead. LSU later scored on that drive, though, a 23-yard touchdown catch by Jaray Jenkins.

Kirklin was 7-of-11 passing for 138 yards, three touchdowns and two interceptions while also rushing for 61 yards on 11 carries. He delivered an 81-yard touchdown pass to Chris Hilton Jr. as time expired.

Davis said LSU had just 38 scholarship players available for the game, but backing out was never an option.

“We don’t stand back from a challenge,” Davis said. “There was never a thought in our mind about not playing this game. We fully expected to win.”

Kansas State appeared to have a slight edge in the makeup of the crowd, despite Baton Rouge, Louisiana, being nearly 500 miles closer to Houston than Manhattan, Kansas.

The Wildcats led 21-7 at halftime.

Kansas State enjoyed its most lopsided win over an SEC opponent in school history, improving to 5-17 against the conference.

Kansas State looked strong on both sides of the ball, with big performances from graduating seniors and players returning next season, en route to the Wildcats’ first bowl win since the Cactus Bowl in 2017.

LSU had hoped to carry on the positive momentum from an upset win over Texas A&M in the regular-season finale, but transfers and injuries got the best of the Tigers. They’ll look to quickly reload next season under the new regime.

Kelly joined the television broadcast and was asked about his time in the limelight with viral videos poking fun of his dancing with recruit Walker Howard or his newfound faux Southern accent.

“Listen, whether it was dancing or whether I couldn’t get my accent down with ‘family,’ listen, I’m from Boston — we don’t have strong accents,” Kelly said.

“He is the epitome of a selfless kid. He probably didn’t have the career he expected to coming out of high school, but he never complained or wavered or thought of transferring or quit. In fact, he was the opposite.” — Davis on Kirklin.

Kansas State will have a new quarterback in 2022, but the offense will likely continue to flow through Vaughn. The Wildcats open against South Dakota.

LSU has an important offseason with the transition to Kelly, who has more victories than any active coach in major college football. The Tigers open against Florida State.