Keels double-double leads No. 7 Duke to 84-62 win at Clemson 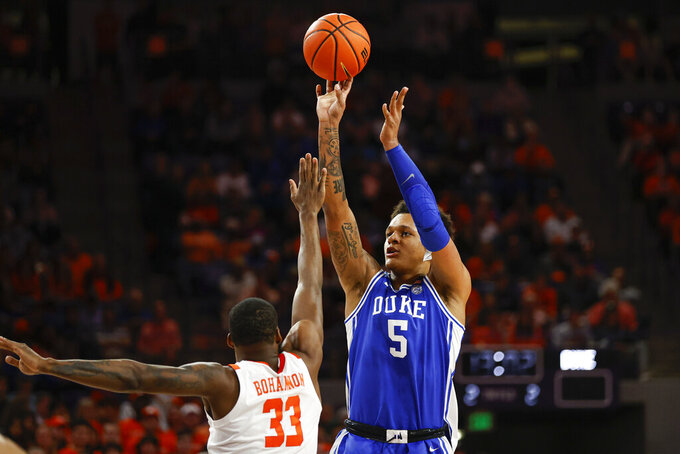 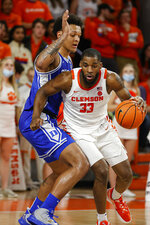 CLEMSON, S.C. (AP) — Duke went from the high of battering rival North Carolina last weekend to the low of losing on a last-second shot to unranked Virginia two days later.

So coach Mike Krzyzewski couldn't be happier with how his seventh-ranked Blue Devils took care of business Thursday night in an 82-64 victory over Clemson.

Trevor Keels tied his career high with 25 points and added a career-best 11 rebounds, while Mark Williams scored 16 points on 8-of-8 shooting for Duke (20-4, 10-3 Atlantic Coast Conference).

“For us, it was a great response to a very difficult loss,” Krzyzewski said.

The Blue Devils trailed much of the opening half Monday against the Cavaliers but made sure that didn’t happen against Clemson (12-12, 4-9). Duke reached 20 wins for the first time since 2020 and the 36th time in Krzyzewski’s 42 seasons.

The 7-foot-1 Williams threw down several dunks during his spotless shooting performance. Paolo Banchero had 15 points and 10 rebounds for the Blue Devils. Keels, a freshman, matched his scoring high set in the season-opening victory over Kentucky.

Duke lost at home to Virginia 69-68 on Reece Beekman's 3-pointer with 1.1 seconds left Monday. Krzyzewski said it was several long days of players and coaches meeting to get their minds back on winning.

Keels and his teammates took it to heart.

“I think that's what's special about this group — everybody wants each other to succeed,” Keels said. “They told me to play like myself out there and that's what I did.”

Clemson, seventh in the ACC in scoring defense, couldn't hold back Duke's attack and fell behind by 13 points.

Clemson came as close as 43-37 on Chase Hunter's high-flying jam with 17:14 to play. But after Krzyzewski called a timeout, the Blue Devils got back to business in defeating Clemson for the sixth time in their past seven meetings.

Williams chipped in with six rebounds, two blocks and a steal to go along with his perfect shooting, most coming a few inches from the rim.

It was the Tigers' third loss in six days, all coming since starter Hunter Tyson broke his clavicle in a victory over Florida State.

The game took an ugly turn when Clemson starting guard David Collins lost the ball to Wendell Moore Jr., who took off for what should've been an uncontested layup. Instead, a charging Collins undercut Moore, who came down hard.

Krzyzewski called it a “dangerous” play.

“He didn't see himself. We saw him,” Krzyzewski said. “He was parallel to the ground, 8 feet in the air.”

Krzyzewski charged onto the court and players from both sides began yelling at each other while order was restored.

Collins was ejected. Before he left, Clemson coach Brad Brownell brought him over to apologize. Collins was seen saying, “That's on me" as he hugged Krzyzewski, coaching a final time at Littlejohn Coliseum.

Krzyzewski accepted Collins' words and Collins put out an apology to Moore on social media. He said he was trying to go for a block, but was too late and couldn't stop.

“I never have been a dirty player, never,” he wrote.

This game was originally set for Dec. 30 until COVID-19 issues postponed it.

Duke: The Blue Devils showed once again why they're on top of the ACC. Williams and Banchero are near impossible matchups in the middle, while Keels and AJ Griffin can score from the outside. Duke outrebounded Clemson 42-33 and hit nine 3-pointers to the Tigers' five.

Clemson: The Tigers gave Duke all it could handle last month at Cameron Indoor Stadium before falling 71-69. This time, though, Clemson missed shots early to fall into a hole the Blue Devils wouldn't let them climb out of. Unless the Tigers find a spark, the NCAA Tournament team from a year ago will have trouble finishing above .500 this season.

Clemson football coach Dabo Swinney, with a pair of national titles to his name, watched the game and then visited with Krzyzewski outside the Duke locker room afterward. Coach K has won five NCAA Tournament crowns in his 42 seasons with the Blue Devils.

Clemson's once-promising season is hitting a troubling roadblock. The Tigers have lost three straight and seven of their past nine — four of them by five points or less. Brownell said the team is having a hard time making shots and its usually solid defense is letting the Tigers down in key stretches.

“We didn't make shots,” Brownell said. “It wasn't like our guys weren't trying to finish the plays.”