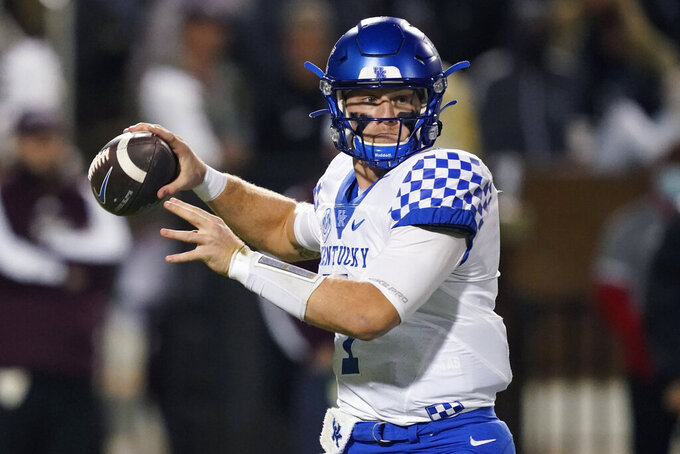 FILE - Kentucky quarterback Will Levis looks for a receiver against during the first half of the team's NCAA college football game against Mississippi State in Starkville, Miss., Oct. 29, 2021. The quarterback with the active and entertaining TikTok account has become an intriguing NFL prospect. That combination of personality and athletic potential has never been more valuable in college athletics. (AP Photo/Rogelio V. Solis, File)

ATLANTA (AP) — Heading into last season, the most notable moment of Will Levis' career as a college football player just might have been eating an unpeeled banana.

A year later, the Kentucky quarterback with the active and entertaining TikTok account has become an intriguing NFL prospect. That combination of personality and athletic potential has never been more valuable in college athletics.

The first year of college sports' name, image and likeness era has allowed thousands of athletes to cash in on their fame and Levis is among the most prominent. But as the adage goes: With great power comes great responsibility.

“I think if anything, NIL really helps young individuals become men and become women earlier and just make those big, adult decisions and to understand kind of how the world works," Levis told AP recently at the inaugural NIL Summit held in Atlanta.

For Levis, that has meant balancing short-term gains with long-term goals and making sure the brand he is building as a player can successfully transition into being the face of an NFL franchise.

“If you’re in college, doing a million deals, who are you?” said Beth Levis, Will's mother. “Maybe you don’t care. But with Will, I think that he does have a strong identity. So we have to make be careful how we navigate the waters.”

The NCAA lifted its ban on athletes being compensated for use of their name, image or likeness a year ago this Friday, one of the biggest changes in the history of college athletics. It did so without detailed guidelines in place and with a patchwork of state laws leaving the market lightly regulated and lacking uniformity.

The results have been mostly positive for athletes, but angst-ridden college coaches and administrators are worried about how NIL has already seeped into and corrupted recruiting.

Levis, a native of Connecticut, said he has signed about 13 endorsement contracts over the last year, working with an agency called Athlete Advantage based in Lexington, Kentucky, home of the Wildcats. The deals include a Lexington car dealership, a national apparel brand and a race horse named Will of War from one of Kentucky’s thoroughbred farms.

He said he has also turned down plenty of opportunities, too.

"With the current setup right now, we got to protect ourselves,” he said. “But we need to understand how doing certain deals, how the amount of deals we do, what kind of deals, what kind of companies we’re working with, how that reflects our brand and our image and the consequences that can come with that."

Even before college athletes could be paid for things like autographs, appearances and endorsements, Levis was interested in the benefits of brand management.

Jim Cavale, the founder of INFLCR, a company that works with schools on NIL programming and compliance, said he first met Levis in 2018 when the quarterback was a freshman at Penn State.

“(Will) came right up to me afterwards. He shook my hand, asked me questions about what I had talked about in regard to brand building, social media, how often he should post, what he should post about,” Cavale said.

Levis spent three seasons as a sparingly used backup at Penn State before transferring after the 2020 season to Kentucky, where he became the starter. Before he took a snap for the Wildcats, he became internet famous after the TikTok video of him eating a overly ripe banana with the peel still on went viral.

After leading the Wildcats to a 10-win season, the buzz picked up on Levis’ pro potential. The 6-foot-3, 232-pound Levis has a chance to be a first-round draft pick in 2023.

Handsome, charismatic, social media savvy and QB1: Levis was primed to capitalize on NIL freedom and had plenty of people interested in representing him. Cavale cautioned Levis not to rush into anything and to avoid long-term commitments.

“Here's the thing: Agents are really wanting to sign you for NIL so they can build a relationship with you by helping you a bit with your NIL. But their hope is you're going to sign for them to do your NFL contract,” Cavale said he told Levis.

Beth Levis declined to reveal how much her son has made in NIL deals. Whatever he has earned during the first year of NIL, there's a good chance he could top it in 2022.

Beth Levis said Will is also working with Williams Morris Endeavor, a talent agenciy with a sports roster that includes Tom Brady and Kevin Durant. She said he is under no obligation to sign with the agency when he does enter the draft.

Will Levis said he would like to refine the content he creates and his social media strategy.

“But it's also really tough as a quarterback, too," he said. "Because you can’t have your fan base and and your teammates and your coaches seeing you posting on social media and be like, ‘Does this mean more to him than the main thing, which is football?’”