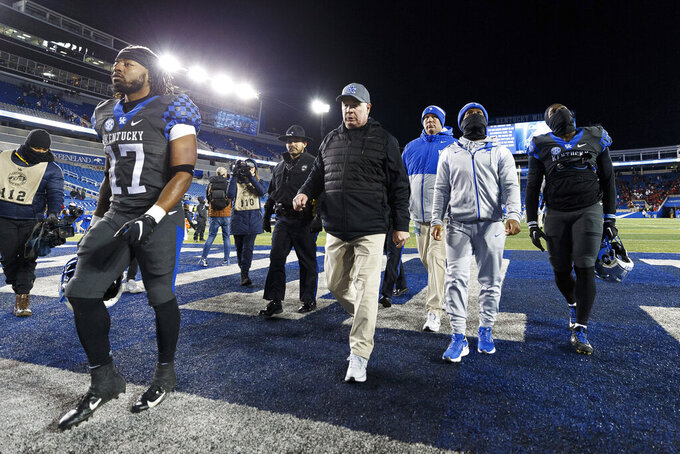 LEXINGTON, Ky. (AP) — Kentucky coach Mark Stoops has signed an amended contract extension through June 2031 that in February will boost his base annual salary to $8.6 million plus incentives.

The 10th-year coach, who is earning $6.35 million this season, signed the new deal on Nov. 11, a day before the Wildcats fell 24-21 to Vanderbilt. It replaces the previous extension signed last December that ran through June 2028 and deletes the clause that automatically extended his contract by one year if Kentucky won seven games and by two years for 10 wins.

Athletic director Mitch Barnhart said in a news release dated Nov. 18 that was posted on the school's website that the agreement had been in the works for more than a month and added that continuity was “more and more important in today’s landscape.”

Stoops said in the release that he wanted to affirm his commitment and added, “I’ve loved it here and am excited for our future.”

The revised contract includes bonuses for reaching College Football Playoff semifinal games ranging from $300,000 to $800,000 for winning the national championship.

Already Kentucky’s longest-tenured coach, Stoops (65-58) surpassed Paul “Bear” Bryant as its career wins leader with his 61st in a victory over Florida in September. The Wildcats began 4-0 and reached No. 7 in the AP Top 25 but have since lost five of seven, including Saturday’s 16-6 home defeat against top-ranked Georgia to finish 3-5 in Southeastern Conference play.