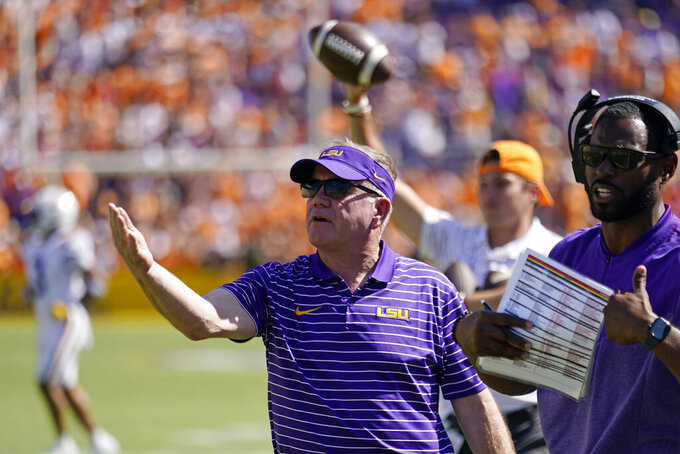 LSU head coach Brian Kelly calls out from the sideline in the second half of an NCAA college football game against Tennessee in Baton Rouge, La., Saturday, Oct. 8, 2022. Tennessee won 40-13.(AP Photo/Gerald Herbert)

“This is the most talented opponent by far,” Kiffin said.

But oddsmakers don't seem to think this season's Ole Miss squad is destined for such glory. LSU (5-2, 3-1) was listed as a 1 1/2-point favorite, according to FanDuel Sportsbook.

The way each team played last week likely figured into that.

Ole Miss was at home against struggling Auburn, yet the Rebels were unable put that game away until well into the fourth quarter and gave up 34 points.

LSU went into the hostile Swamp and lit up Florida, winning 45-35 in quarterback Jayden Daniels' best game yet as a Tiger. Daniels passed for three touchdowns and ran for three more.

“He played great the other night, running and throwing,” Kiffin said of Daniels. "A very explosive player. And they seem to have gotten the receivers going.”

One of the LSU receivers to which Kiffin alluded was Kayshon Boutte, who had an extraordinary game the first time Kiffin coached for Ole Miss in Tiger Stadium two years ago. Boutte caught 14 passes for an SEC-record 308 yards and three TDs in that game. Last week at Florida, Boutte caught six passes for 115 yards.

Kiffin's teams tend to move the ball well, too. And the 2022 Rebels are no exception, despite the loss of star QB Matt Corral to the NFL last spring.

“Dart can throw it, he can run,” Kelly began. “He’s complementary with two outstanding backs, big receivers and a very balanced attack that can run it equally as well as they throw it. So, I have a lot of respect for what they do.”

This marks the fourth time Kelly and Kiffin have faced one another as head coaches.

The past three instances involved Southern California, where Kiffin coached from 2010 to 2013, and Notre Dame, where Kelly spent the previous 12 seasons.

Kelly's Irish won two of those meetings, both at the Los Angeles Coliseum, while Kiffin won in South Bend, Indiana.

But Kiffin noted that “our backup quarterbacks were playing when they won.”

Kelly spoke with admiration for Kiffin's ability to design and call offensive plays.

“They always have been cutting edge,” Kelly said of Kiffin's offenses. “You better know your own self-scouting and where your tendencies are, because he’s going to really dial in on if there is anything that you do (defensively). ... He is going to analyze that and have an answer for it.”

LSU is hosting a team ranked in the top 10 for the second time in three weeks.

Last time, the Tigers were routed 40-13 by Tennessee, which was ranked eighth at the time and has since climbed to No. 3.

But Kelly liked his team's response at Florida the next week.

“This team each week is learning so much and growing,” Kelly said. “Two weeks later it’s, I don’t want to say a different team, but it’s a team that has confidence. It’s a team that knows if they don’t play clean, if they don’t have an attention to detail, they’ll have similar results as they did against Tennessee.”

Ole Miss is 2-0 on the road so far, but Kiffin figures LSU’s 102,000-seat Tiger Stadium provides a more challenging environment than Georgia Tech and Vanderbilt.

“Obviously this is a different animal than the first two places," Kiffin said. “No disrespect to those places but this will be a real atmosphere and crowd noise for our guys to step into.

“A lot of teams have not performed very well there," Kiffin said. "They’ve got a great, winning record over the years there. Their crowd understands football and is into it as much as any place that you go. We’ve played some really challenging games there.”