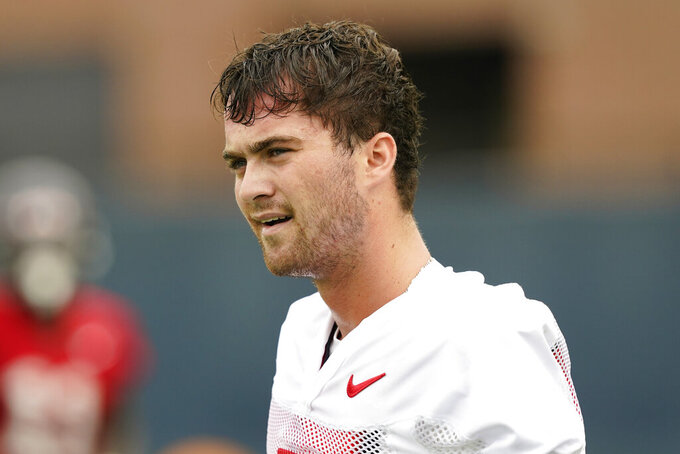 Lane Kiffin needs only a quick look around the practice field to take inventory of the changes at Mississippi.

There’s no Matt Corral flinging passes to Dontario Drummond. Kiffin also has new coordinators on both sides of the ball and an all-new offensive backfield. Kiffin leaned heavily on the transfer portal at various positions trying to sustain the success coming off the program's first 10-win regular season.

And he’s clearly adapting well. Ole Miss is ranked No. 21 in the preseason AP poll.

Kiffin has picked up two dozen players from the transfer portal, including quarterback contender Jaxson Dart from USC. It was the No. 2-rated transfer class, according to 247Sports.

The reinforcements were needed for a team that lost its star passer, top three running backs and three leading receivers. Not to mention key defenders like linebacker Chance Campbell and top pass rusher Sam Williams.

The defense is led by returnees like defensive end Cedric Johnson and safety AJ Finley, but is also banking on transfers, partcularly in the front seven.

The biggest question is who is replacing Corral, who directed the nation’s No. 6 offense. Dart played in six games at USC as a freshman, passing for 1,353 yards and nine touchdowns with five interceptions. Altmyer was the backup last season but replaced an injured Corral in the Sugar Bowl.

Weis praised both for their work ethic and intelligence, but Corral leaves big shoes to fill.

“You got used to every throw being in there and not just miss,” Kiffin said “It takes some getting used to having new quarterbacks and losing a veteran that was an elite arm talent.”

The Rebels were much improved on defense last season and will lean heavily on transfers to keep it up. They allowed 24.69 points a game, nearly two touchdowns better than 2020.

The secondary is the most experienced group with four returning starters led by safety AJ Finley. The front seven is hoping for a big boost from transfers, including former Central Michigan linebacker Troy Brown and defensive lineman JJ Pegues (Auburn) and Jared Ivey (Georgia Tech).

The Ole Miss running game might not miss a beat despite losing its top three tailbacks, thanks to the portal. Ex-TCU back Zach Evans is a former five-star prospect who ran for 684 yards and five touchdowns in six games last season. Ulysses Bentley IV played three seasons at SMU.

“I feel like all of them have a good complimentary deal where they can run the majority of our offense,” Weis said of the backs.

Receiver Jonathan Mingo gets a chance to step into a significantly bigger role. A 26-game starter over his career, Mingo is the top returnee from a group that lost 1,000-yard receiver Drummond and Braylon Sanders. He was limited to six games last season because of a foot injury, recording 22 catches for 346 yards and three touchdowns.

Ole Miss opens Sept. 3 against Troy to start a four-game nonconference stretch but the closing gauntlet looks downright treacherous. The Rebels finish up with five straight games against SEC West opponents, including preseason No. 1 Alabama, No. 6 Texas A&M and No. 20 Arkansas.