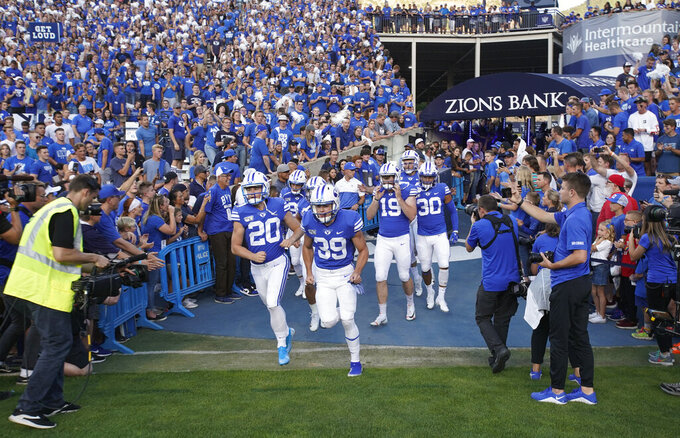 FILE - BYU football players enter the field to warm up for an NCAA college football game against Utah in Provo, Utah, Thursday, Aug. 29, 2019. NCAA enforcement has inquired about how college athletes are earning money off their names, images and likenesses at multiple schools as it attempts to police activities that are ungoverned by detailed and uniform rules. BYU is the one school that has publicly acknowledged providing the NCAA with information about an NIL deal. (AP Photo/George Frey, File)

As the market for college athlete to earn money off their names, images and likenesses rapidly evolves, NCAA enforcement is faced with the tricky task of trying to police activities currently unregulated by detailed, uniform rules.

NCAA Vice President of Enforcement Jon Duncan told the Associated Press that letters of inquiry have gone out to multiple schools over the last few months. He declined to identify the schools but said the letters are not indicative of a formal investigation and they are frequently used for an assortment of reasons.

“It’s just dialogue with a school to get more information about whether violations have occurred,” he said this week.

The NCAA lifted most restrictions on athletes earning money through sponsorship deals or as paid endorsers last summer after numerous states passed laws that usurped the association's rules. The NCAA enacted an interim policy that flung open a new market, but with no consistency from state to state. Schools were told to create their own policies, following state laws where applicable.

While the NCAA has no NIL-specific bylaws, deals must still adhere to existing rules that prohibit recruiting inducements and athletes being paid solely for playing or for performance.

But in the absence of well-defined dos and don'ts, determining what activities cross the lines is a challenge.

“The deals are being done with third parties. And the NCAA obviously has no jurisdiction over those third parties,” aid Mit Winter, a former college basketball player and now a sports law attorney for Kennyhertz Perry. “(The NCAA) can talk to and gather information from schools and the athletes. But any incriminating information is most likely going to be among people that either work for or have some involvement with third parties.”

BYU is the only school that has publicly acknowledged providing the NCAA with information about a NIL deal. BYU officials helped arrange for a Utah-based company to pay the equivalent of tuition to its walk-on football players in exchange for the athletes promoting the company's products with social media posts and appearances.

A proposed NCAA policy would have prohibited schools from being involved in facilitating NIL deals for their athletes. But legislation was never voted on after a Supreme Court ruling in May left the NCAA vulnerable to future antitrust lawsuits.

State laws in Florida, Alabama and elsewhere restricted schools from facilitating NIL deals for athletes, but that has left schools in those states seemingly at a recruiting disadvantage against those in states that have looser or no NIL laws.

State lawmakers are now looking to repeal or rewrite NIL laws. Earlier this week, Ohio State announced it is launching a program to “create and foster” NIL opportunities for its athletes.

Around the country, booster-backed NIL collectives have been popping up from West Virginia to Washington. They are designed to connect college athletes with money-making opportunities, where they can be paid for things such as personal appearances, signing autographs or doing a podcast.

“I could see the NCAA wanting to gather information from the schools to see if there is any relationship between the school and its employees and the collectives,” Winter said. “I can see the NCAA being very interested in that.”

As long as there is a quid pro quo — the athlete is providing some type of service for the payment —- it would be difficult to deem a deal in conflict with the NCAA's broad prohibition against pay-for-play.

“There is no body that can specifically assess what fair market value is in this context,” said attorney Darren Heitner, who helped craft Florida's NIL law. “It is completely subjective.”

Heitner has worked with companies and business owners on NIL opportunities for athletes at Florida and Miami. He said the NCAA has not provided much direction on what could put an athlete's eligibility at risk.

“Hopefully, we get more guidance and more clarification,” Heitner said.

NCAA enforcement is not involved in policy making and is not making these inquiries to gather information to inform future NIL legislation, Duncan said.

He said enforcement has been prompted to reach out to schools by media reports, feedback from member schools and information from sources, which are typically the ways activities land on his staff's radar.

“It's not an academic exercise for us. It’s not just exploratory to get our arms around what’s going on in this environment, understand the landscape,” Duncan said. “It is to satisfy ourselves that the transactions, arrangements, whatever, aren’t violative of bylaws that the membership tells us are important.”