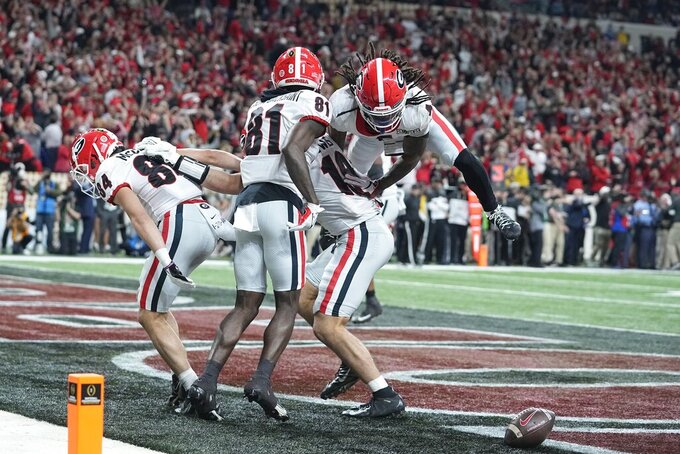 Georgia's Brock Bowers is congratulated after scoring a touchdown during the second half of the College Football Playoff championship football game against Alabama Monday, Jan. 10, 2022, in Indianapolis. (AP Photo/Darron Cummings)

Stetson Bennett threw two touchdown passes to lead Georgia to a 33-18 win over Alabama on Monday night for its first national championship in 41 years.

Georgia won its first national title since 1980. Vince Dooley, the 89-year-old coach of that team, attended the game.

The Bulldogs lost to Alabama 41-24 in the Southeastern Conference championship game on Dec. 4.

Bennett’s lost fumble set up an Alabama touchdown for an 18-13 lead with about 10 minutes remaining. Georgia dominated the remainder of the game.

Stetson Bennett’s 40-yard touchdown pass to Adonai Mitchell has given Georgia a 19-18 lead over Alabama in the national championship game.

Bennett lost a fumble on Georgia's previous drive, leading to an Alabama touchdown.

The Bulldogs responded with their most pass-happy drive of the game. Jermaine Burton had a 10-yard catch to open the drive before drawing a pass-interference penalty.

Bennett was sacked but answered quickly with the scoring pass to Mitchell, a freshman.

Georgia’s James Cook was stopped on the 2-point run.

Alabama regained the lead in the national championship game with its first touchdown, thanks to a nonchalant-looking fumble recovery and Bryce Young’s short touchdown pass to Cameron Latu.

Young’s 3-yard scoring pass gave the Crimson Tide an 18-13 lead with 10:14 left against Georgia. Young was tackled behind the line on a 2-point attempt.

The score was set up when Georgia quarterback Stetson Bennett lost the ball while Christian Harris was dragging him to the turf. Bennett was trying to throw the ball, but it appeared to come out before his arm moved forward and it was ruled a fumble on the field. Replay upheld the call.

Alabama safety Brian Branch almost casually collected the ball as he was headed out of bounds, getting one foot in bounds.

Georgia took its first lead of the national championship game with the first touchdown by either team.

A 67-year-old run by James Cook set up Zamir White's 1-yard score that put the Bulldogs ahead of Alabama 13-9 with 1:20 left in the third quarter.

Before White found the end zone, the Southeastern Conference rivals had combined for five field goals.

The All-American, a transfer from Ohio State, returned to the sideline in street clothes midway through the third quarter. Williams appeared to hurt his left knee in the first half at the end of a 40-yard catch. It was a non-contact injury. He had four catches for 65 yards.

No. 1 Alabama leads No. 3 Georgia 9-6 at halftime of the CFP championship game, a contest that has turned into a defensive struggle.

The two teams combined for five field goals and and have just 31 yards rushing.

The Crimson Tide lost top receiver Jameson Williams with what appeared to be an injured left knee early in the second quarter. He has not returned.

Coach Nick Saban told ESPN at halftime that young receivers would have to step up.

“They’ve got talent. So they’ve got to play with competitive character and have a chance to make some plays. They’re capable,” Saban said. "They don’t have the experience, but they’re going to get it tonight.”

“We’ve got to settle down,” he said. "We haven’t had probably one drive where we didn’t have negative yards starting where we had to back up.”

Georgia will receive the second half kickoff.

The Crimson Tide All-American clutched his left knee lying on the ground after a 40-yard catch in the second quarter against Georgia. Williams was helped off the field, putting minimal weight on his left leg. He walked toward the locker room minutes later.

Alabama scored on the drive to take a 6-3 lead.

Williams is one of the nation’s top deep threats, with four touchdown catches of 70-plus yards to lead the nation. He had four catches for 65 yards at the time of the injury.

Williams had seven catches for 184 yards and two touchdowns in the SEC title game against the Bulldogs.

A sellout crowd, clad largely in red, filled Lucas Oil Stadium arrived early for the national championship game between SEC rivals No. 1 Alabama and No. 3 Georgia.

Organizers were following the county health department's guidelines — strongly encouraging masks be worn but not requiring it. Unlike last year's title game in Miami, fans were not socially distanced.

New College Football Hall of Fame inductee Andrew Luck returned to Lucas Oil Stadium for what is believed to be his first appearance at the Indianapolis Colts home field since he retired unexpectedly in August 2019.

Luck was one of 21 former players or coaches named as part of this year's Hall of Fame class earlier in the day.

The two-time Heisman Trophy runner-up looked much thinner than he did when playing for the Colts from 2012-18. He was the No. 1 overall draft pick in 2012 and replaced Peyton Manning as the Colts starter.

When word leaked of Luck's retirement near the end of a preseason game, Indy fans began booing. After the game, Luck made made his official retirement announcement — a little sooner than he had planned.

The blue Colts attire that local fans usually wear was replaced with red hats, shirts, jackets and jerseys of the two Southeastern Conference teams, playing for a title in the Midwest.

Fans waited in long lines inside and outside restaurants despite temperatures hovering in the mid-20s, while others flocked to Monument Circle for afternoon concerts with Breland and Sam Hunt underneath the sun-drenched skies.

Alabama beat Georgia five weeks ago in the SEC title game, but the Bulldogs are a slight favorite. This is the first rematch for the championship in the playoff era.

The game kicks off at Lucas Oil Stadium at 8 p.m. and airs on ESPN.