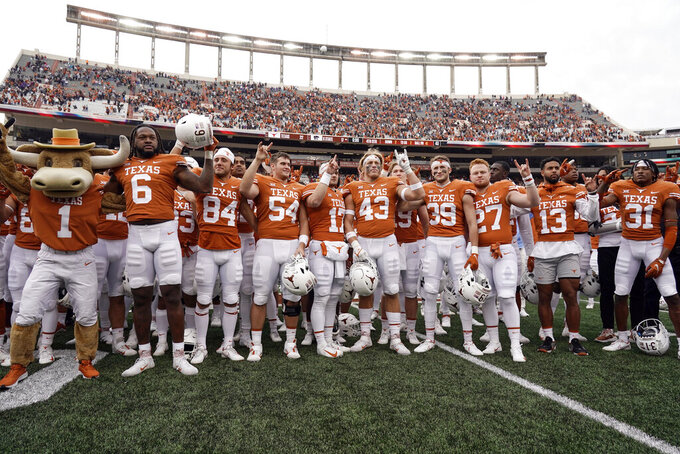 FILE - Texas players sing "The Eyes Of Texas" after defeating Kansas State 22-17 in an NCAA college football game in Austin, Texas, Friday, Nov. 26, 2021. Six months after one of the biggest rule changes in the history of college sports, money for athletes is being pledged by the millions in a development that has raised concerns about the role of wealthy alumni eager to back their beloved alma maters. At Texas, one group is dangling $50,000 a year for individual offensive linemen while another says it already has $10 million promised for Longhorns athletes. (AP Photo/Chuck Burton, File)

AUSTIN, Texas (AP) — Six months after one of the biggest rule changes in the history of college sports, money for athletes is being pledged by the millions in a development that has raised concerns about the role of wealthy alumni eager to back their beloved alma maters.

At Texas, one group is dangling $50,000 a year for individual offensive linemen while another says it already has $10 million promised for Longhorns athletes. At Oregon, billioniare Nike founder Phil Knight is part of group helping Ducks athletes line up deals — just one of many interested parties with deep pockets jumping in alongside the apparel companies, energy drink companies, car dealerships and restaurants already signing athletes to endorsement deals.

College football's first national signing day arrives this week in this new money era. With few rules governing how it all works, the push to dangle cash in front of players already in uniform and lure future stars to campus has created a new, rapidly expanding frontier in college sports with so-called “collectives" and even nonprofits popping up to play ball.

“It is the wild, wild West,” said Todd Berry, executive director of the American Football Coaches Association. “Did anyone expect anything different?”

Hundreds if not thousands of athletes are taking advantage of the name, image and likeness era, signing mostly modest deals to lend their celebrity to an advertising campaign for any number of businesses across the country. Some have landed truly spectacular deals worth far more.

The guidance put in place by the NCAA, schools and state laws are clear about one thing: A NIL deal cannot pay a player directly to attend or play for a school, though most schools were quick to provide NIL guidance, support and connections to interested businesses.

The twist now is that donors who want the best players at their alma maters are getting involved, making bold promises in a clear bid to attract attention from recruits weighing their options.

More than a dozen “collectives” have sprung up around major college programs like Ohio State, Penn State, Washington, Tennessee and others to connect athletes with marketing opportunities.

Clark Field Collective, which is officially unaffiliated with the school, claims it already has $10 million pledged to support NIL deals for Longhorns athletes. Days later, a new nonprofit called Horns With Heart said it would pay $50,000 annually to Longhorns offensive linemen for work supporting community charities.

“The University of Texas at Austin maintains the largest, wealthiest alumni donor base in the entire country,” Clark Field Collective CEO Nick Shuley said. “It’s time a network like this existed to support our college athletes.”

Horns With Heart is a new kind of player in the athlete compensation field and it drew almost immediate outrage from rival fan bases amid larger questions about NIL's role as a recruiting enticement.

Horns With Heart was annnounced as Texas coach Steve Sarkisian was publicly pursuing offensive line recruits; he called the position a critical need after a disappointing 5-7 season. Within days, he scored two big commitments from blue chip players.

Rob Blair, one of the founders of Horns With Heart, said his organization doesn't cross any lines.

“Pay for play is a deal breaker under NIL,” Blair said. “This isn’t pay for play. This is for actual charitable work.”

Blair said the required charity work could be in-person appearances, promotion or representation, but the work has to be done to get paid.

“This organization was started for purely altruistic means,” Blair said.

It did raise some eyebrows among charity watchdogs.

“Hard to see the charitable purpose when the unifying feature is paying athletes for sponsor deals. It’s certainly a unique take on NIL arrangements," said Brian Mittendorf, an accounting professor at Ohio State’s Fisher College of Business with a focus on nonprofits.

“The way it’s packaged, it comes across more as a way to support the athletes as opposed to a way to achieve a charitable objective,” Mittendorf said.

According to documents filed with the Texas Secretary of State, Horns With Heart has six founding directors. Several are Texas graduates.

Blair, a sales director for a shipping company, and Rick Vasquez, an executive at a tech company, did not go to Texas. Blair went to Sam Houston State and Vasquez to Texas A&M, though he backs Longhorns athletics.

Blair said he has never been a financial donor to Texas, but supports Longhorns athletics to honor the memory of his dad, a walk-on offensive lineman in the 1960s. He and Vasquez also launched “Burnt Ends” a crowd-sourced NIL fund set up to benefit Longhorns tight ends.

Texas officials did not respond to requests for comment. Blair said his group has a “great working relationship” with school compliance officials.

NCAA President Mark Emmert said last week the NCAA has looked into several unidentified NIL agreements, but has so far found most schools are correctly following the guidelines that do exist.

Gabe Feldman, director of Tulane’s sports law program, called the era of NIL deals an arms race for schools in the recruiting wars.

“There’s not much to limit where these deals can go," Feldman said. "And so I think it’s sort of a natural consequence that schools and boosters, athletes and agents and sponsors are going to find ways to exploit every opportunity they can, right?”

Nate Wood, associate athletic director for compliance at North Carolina, said he would like to see more efforts to educate athletes about contracts and business before they even get to college. In the early months of NIL, some athletes jumped at the prospect of getting paid.

“We've seen some really bad contracts come through, some really bad deals that no reasonable person would sign," Wood said. “But these student athletes were so excited that this was a new opportunity and there was money in their pocket right from the get go, they were willing to sign anything.”

Feldman said schools should be watching to make sure athletes aren’t taken advantage of.

“I think there are land mines all over the place here," he said. "It’s only a matter time before we hear a story an athlete getting financially exploited.”