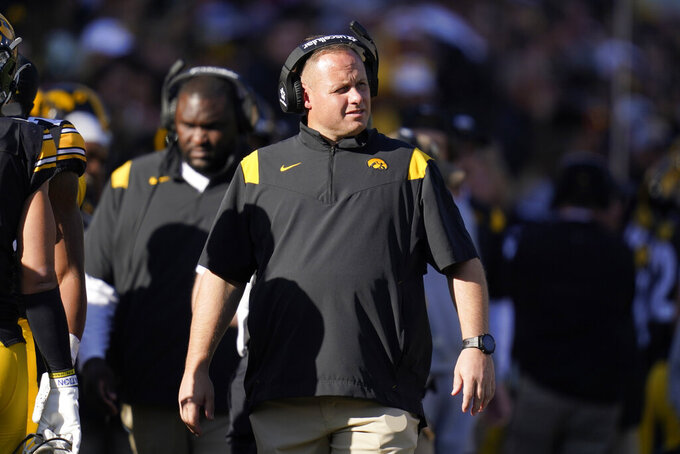 FILE - Iowa linebackers coach Seth Wallace watches from the sideline during the first half of an NCAA college football game against Purdue, Saturday, Oct. 16, 2021, in Iowa City, Iowa. Iowa linebackers coach Seth Wallace has been added as a defendant in a lawsuit filed against the university and athletic department personnel by former football players alleging they were discriminated against and harassed because they are Black (AP Photo/Charlie Neibergall, File)

DES MOINES, Iowa (AP) — Iowa linebackers coach Seth Wallace has been added as a defendant in lawsuit filed against the university and coaches by former football players who allege they faced discrimination and harassment because they are Black.

They allege they were demeaned with racial slurs, forced to abandon Black hairstyles, fashion and culture to fit the “Iowa Way” promoted by Kirk Ferentz, held to different standards than white players and retaliated against for speaking out.

The university agreed to pay strength coach Chris Doyle $1.1 million as part of a resignation agreement in June 2020, after dozens of former players said on social media that he had bullied and discriminated against them. Doyle has denied the allegations.

An investigation by an outside law firm later found that the program’s rules “perpetuated racial and culture biases and diminished the value of cultural diversity,” and allowed coaches to demean players without consequence. Kirk Ferentz made several changes in response that players have welcomed.

In the new filing, the former players allege Wallace harassed, bullied and belittled Black players because of their race, creating a racially hostile environment.

Parker also accuses Kirk Ferentz of retaliating against him after finding out Parker had complained to a university therapist about how he had “grown weary” from harassment he and other Black players faced. Ferentz acknowledged to Parker that the therapist had shared with him Parker's concerns.

“The conversation affirmed for Jonathan that nothing in the program slipped past K. Ferentz, not even players’ ‘confidential’ therapy sessions,” the lawsuit said.

Parker also alleged Brian Ferentz used racist language during practice in 2013 while Kirk Ferentz was within earshot. The head coach told Parker he would not correct Brian Ferentz and that Parker should think about his future in the program. Parker transferred.