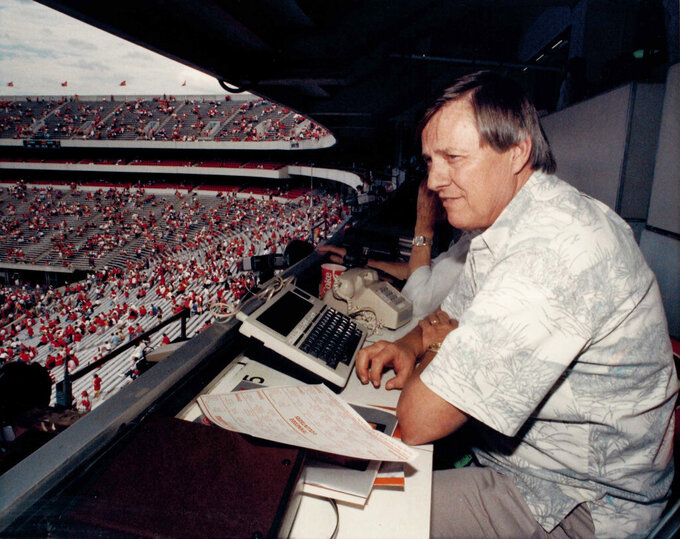 In this circa 1988 photo, AP sports writer Ed Shearer covers an NCAA college football game between Georgia and Tennessee at Sanford Stadium in Athens, Ga. Shearer, a longtime sports writer with The Associated Press who covered the Olympics, Super Bowl, World Series and Hank Aaron's 715th homer but left his most lasting mark as the "SEC Seer," a prognosticator of Southern football known throughout the nation, died Monday., June 14, 2019. He was 82. (AP Corporate Archives via AP) 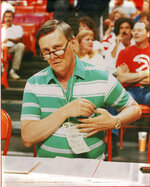 ATLANTA (AP) — Ed Shearer, a longtime sports writer with The Associated Press who covered the Olympics, Super Bowl, World Series and Hank Aaron's 715th homer but left his most lasting mark as the "SEC Seer," a prognosticator of Southern football known throughout the nation, died Monday. He was 82.

Shearer's son, Jim, said his father's health deteriorated after he took a fall May 10, breaking bones in his wrist and lower back. He was in hospice care when he died at an assisted-living facility in Talking Rock, a small town in north Georgia.

Working at the AP for more than 40 years, Shearer covered a range of sports but was most passionate about college football. In an era when many states did not have a full-time AP sports writer, he traveled the region extensively covering the biggest game of the week. He also was a regular at major postseason games such as the Sugar Bowl in New Orleans and the Senior Bowl all-star game in Mobile.

"He was pretty much the big-game AP writer," said Claude Felton, the longtime sports information director at Georgia.

Shearer parlayed his extensive knowledge into the popular "SEC Seer" column, a fixture in Southern newspapers giving his predicted scores for that weekend's games in the powerful football conference.

"He was one of the really legendary sports journalists not only in the South but in the country," Felton said. "I would run into people all over the country who would ask, 'How's Ed Shearer doing? Have you seen Ed Shearer lately?'"

Edgar Kearney Shearer was born in Shreveport, Louisiana, and moved frequently throughout that state and neighboring Mississippi during his childhood as the son of a Methodist minister. He eventually settled in Jackson, Louisiana, where he met his high school sweetheart and future wife, Mary Jane. They were married more than 50 years until her death in 2015.

Shearer attended Louisiana Tech, where he studied journalism and covered school sporting events, and left The Times of Shreveport to begin his long career with the AP in the mid-1960s. His first role with the news cooperative was not in sports, however; he was hired to cover state government in Arkansas' capital, Little Rock.

Shearer transferred to Atlanta in 1969 to become a sports writer, chronicling a wide range of local and national events.

He covered the Summer Olympics in Montreal (1976), Los Angeles (1984) and Atlanta (1996), as well as numerous Masters golf tournaments, several World Series involving the Atlanta Braves in the early 1990s, and the 1994 Super Bowl held at the Georgia Dome. Most notably, he wrote the account that ran on front pages around the nation when Aaron broke Babe Ruth's home run record at Atlanta-Fulton County Stadium in 1974.

Shearer worked at the AP into his 70s, taking young colleagues under his wing and regaling everyone with humorous stories about all the people he met along the way — from Bear Bryant to Vince Dooley to Hammerin' Hank — all while watching over the AP report with a keen editing eye that routinely picked up dropped words and typos others had missed.

"Ed taught a generation of news people, including me, that came through AP bureaus in the South everything about sports news, from how to formulate a box score to how to write a game story with nothing but a faxed stats sheet to how to deal with a flustered stringer at the ballpark," said Michael Giarrusso, the AP's global sports editor who worked with Shearer in the Atlanta bureau. "And he did it all without ever making even the most inexperienced writer feel bad, joking constantly, ignoring complaints from New York all while living on a diet exclusively of jalapeno peppers and Fritos."

Tom Saladino, a retired AP sports writer who worked alongside Shearer for more than 30 years in Atlanta, also remembered Shearer's legendary iron stomach, undoubtedly a holdover from his upbringing in Louisiana and the requisite love of spicy food. When working night shifts in the office, especially during college football and basketball seasons, dinner consisted of "a paper bag full of the hottest green peppers to go along with more than a gallon of coffee," Saladino said.

Shearer continued eating those hot peppers right to the end. His daughter-in-law, Sheri Browne Shearer, said they were grown in a garden behind the assisted-living facility, providing him with a steady supply of his favorite food.

Shearer spent a good portion of his career covering Dooley's coaching tenure at Georgia, including a national championship season in 1980.

"I remember him as being enjoyable to be around," the 86-year-old Dooley said Monday. "A real professional, but he was also a human being."

A prolific smoker through much of his life, Shearer was among a hearty group of football writers who took part in the SEC Skywriters tour, hopping aboard a propeller plane for a whirlwind tour of the league's then-10 member schools before each season. They were able to interview the players and coaches in a relaxed, informal atmosphere — a striking contrast to today's regimented behemoth known as SEC Media Days — and get a feel for what was really going on in each program.

Terry Taylor, the AP's sports editor for more than 20 years before her retirement in 2013, said Shearer was a calming presence during her first Masters.

"I still remember walking into the press room at Augusta National for the first time, not sure where I was going and how I would find my colleagues. Then I saw the broad shoulders in the first row and, as I got closer, the cigarette. I didn't need to see his face," Taylor said. "The Masters — though in a class by itself — was one of the hundreds of tournaments, championships, playoffs and meets he covered year in and year out in Georgia. It's hard to imagine anyone connected to sports back then who didn't know Eddie, an easygoing gentleman who perfected the art of juggling assignments."

Not every event was as big as the Masters.

"What I remember is those days in the late 1980s, when the Braves weren't very good, and he'd call to check in his stories from Fulton County Stadium," AP baseball writer Ben Walker said. "The park was pretty empty. You could hear the ball hitting the bat and glove in the background. On lazy Sunday afternoons, he'd have a couple of guys who were older than him helping in the press box, Ray (Tapley) and Charlie (Roberts). You'd get on the phone and pretty soon, they'd be talking Ty Cobb, the Georgia Peach himself, and long-ago days from a bygone era."

Felton said his most striking memory of Shearer's long tenure was his customary departure from the press box at Georgia's Sanford Stadium.

"He always raised his hands and said, 'See you next week — unless I win the lottery,'" Felton said.

Even after Shearer moved from sports writing to desk duties in the 1990s, he continued to write his weekly "SEC Seer" column. His last entry ran in January 2009 before the national championship game between Florida and Oklahoma.

But, in a sign of his versatility, Shearer's final byline before his retirement was a story about deadly storms that struck Georgia and Alabama.

Shearer is survived by three children, Margaret, Laura and Jim, and their spouses, as well as three grandchildren and three great-grandchildren. A memorial service is planned for next month at St. Barnabas Anglican Church in suburban Atlanta.