LSU addressing a slew of miscues after Kelly's debut 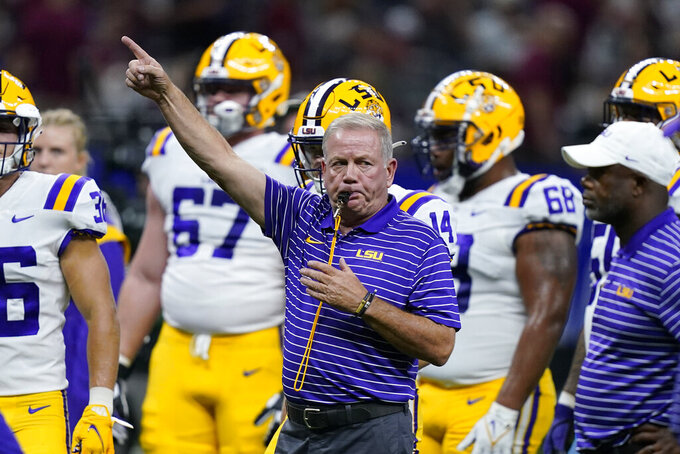 BATON ROUGE, La. (AP) — LSU has emerged from a disappointing season opener trying to address a slew of costly miscues in the Tigers' one-point loss to Florida State.

The game marked an inauspicious debut for coach Brian Kelly, given his professed emphasis on organization and getting the details right.

“Coming off a difficult loss, you can imagine there’s a lot of emotion,” Kelly said Tuesday as the Tigers (0-1) prepared to host Southern (1-0) in the first meeting of the two Baton Rouge institutions.

“There’s so many things that I could stand here in front of you (and say) that in Week 1, we want to do better,” Kelly said. “I could touch upon every single aspect of the game.

The lowlights of Sunday's 24-23 loss included two fumbled punts by receiver Malik Nabers, a blocked field goal, a blocked extra point that could have tied the game at the end of regulation, a bad snap that went for a 14-yard loss on second-and-goal from the 5, and a third-down incomplete pass near the end zone that glanced off the torso of top receiver Kayshon Boutte, who wasn’t looking for the ball.

Boutte, a preseason Biletnikoff Award candidate, could be seen stewing on the sideline while quarterback Jayden Daniels tried to speak with him, a potentially troubling sign that Kelly said he has addressed.

“His standard is so high. And, obviously, it was a difficult day for him. It wasn’t his best. But he’s going to have great games,” Kelly said, describing Boutte as the “least” of the offense's concerns.

Boutte had just two catches for 20 yards. He also was unable to maintain control of a contested pass near the back of the end zone. And it's not often that Boutte's lack of production becomes a story line, Kelly noted.

“He’s a young man who hasn’t been in this situation before and he needs some guidance," Kelly said. "We worked on some things that will help him handle the scrutiny. And quite frankly, the scrutiny was strong.”

Meanwhile, Kelly blamed himself for Nabers’ second muffed punt, which could have cost the Tigers their last chance to tie the game had the Seminoles not subsequently fumbled themselves, setting up a dramatic, 99-yard LSU TD drive in the final 1:20.

“It was my decision to stick with Malik,” Kelly said. “I felt like he’s an elite athlete, he’s confident and I wanted to show that confidence in him.”

Protection up front was an issue, not only on the blocked kicks, but also in the running and passing games.

The Tigers entered the game lacking experience across the line. No current LSU offensive lineman has more starts for the Tigers than Cam Wire, who had four prior to the opener. Garrett Dellinger was starting at center for the first time in his career after switching positions in the offseason.

While Daniels rushed for 114 yards, most of that came on scrambles. The rest of the team combined for just 39 yards rushing.

“Obviously, the run game has to continue to grow,” Kelly said, noting how the running backs reads have to be in synch with the blocking of linemen, tight ends and receivers. “We’ve got to get all those pieces working together.”

Daniels, who was sacked four times, had little time to throw until the latter part of the fourth quarter, when the Seminoles dropped into a conservative, “prevent” defense.

Kelly said that pass blockers are still developing an “awareness” of where and when they can and should help one another.

That improves “when you get a group of guys that are playing together for a while," Kelly said. “Certainly, we lack a little bit of that right now.”

Defensively, LSU will have to adjust to the loss of defensive end Maason Smith, who tore his left anterior cruciate ligament (ACL) when his knee buckled as he came down from a celebratory hop following a teammate's tackle.

“Obviously, we’re crushed for him because he was celebrating for a teammate,” Kelly said. “He’s a great player. You’re going to miss great players.”

On the whole, Kelly said, the Tigers deserved criticism for their opening showing.

“It’s a high-profile program,” Kelly said. “I’m not up here to make excuses for our guys. ... We should be critical of our coaching and of our play. Critical analysis is going to get us better.”