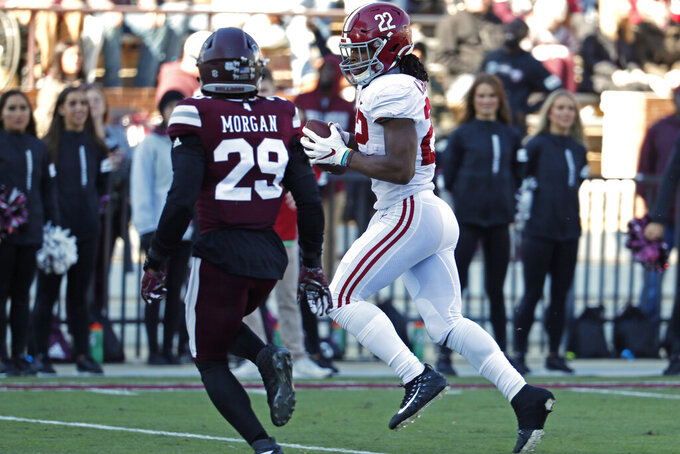 TUSCALOOSA, Ala. (AP) — The fifth-ranked Alabama officially begins the remainder of its football season without Tua Tagovailoa when FCS Western Carolina visits Bryant-Denny Stadium, five days after the team’s star quarterback had surgery on his right hip.

Alabama (9-1) remains fifth in the College Football Playoff rankings and still clings to hopes of another shot at a national title, even without Tagovailoa. The Crimson Tide can’t do much to help its own case Saturday against the Catamounts (3-8) ahead of the regular season finale at No. 16 Auburn.

For the second time this year, Mac Jones is starting in place of an injured Tagovailoa — this time for the remainder of the season. He had a strong performance against Arkansas in another mismatch but seems unlikely to consistently put up the kind of numbers Tagovailoa produced.

“I don’t think the offense changes much at all,” insists Tide coach Nick Saban.

Alabama does get a chance the next two weeks to demonstrate that it’s still formidable — and potentially playoff worthy. It’s hard to imagine the offense will look the same minus a quarterback who had already thrown for 2,840 yards and 33 touchdowns against just three interceptions.

Jones completed 18 of 22 passes for 235 yards and three touchdowns in his starting debut. He can lean on a supporting cast led by tailback Najee Harris and receivers DeVonta Smith and Jerry Jeudy.

Alabama held firm in the playoff rankings but likely has an even more uphill battle than before to prove that it’s one of the nation’s four best teams. Tide right tackle Jedrick Wills Jr. has a strong take on anybody who believes the team should slip because of Tagovailoa’s injury: “I feel like it’s stupid.”

Some other things to know about Alabama’s matchup Saturday against Western Carolina:

Western Carolina has played 56 games against FBS opponents and lost all of them. Alabama is 4-0 against the Catamounts, outscoring them by a combined 201-20.

Alabama has shut out at least two opponents in each of the past eight seasons, but hasn’t recorded one yet this year. The Tide has held Western Carolina scoreless in two of the four meetings.

Western Carolina quarterback Tyrie Adams has a huge edge on Jones in experience. He’s the program’s all-time leader with 8,866 passing yards, 11,385 total yards and 64 passing touchdowns. In five games against FBS opponents, Adams has passed for 927 yards and two touchdowns and rushed for 404 yards and a pair of scores.

Western Carolina defensive assistant Mark Rhea played defensive line under Saban at Toledo in 1990 and later worked under him as a Michigan State graduate assistant. Catamounts quarterback coach Phillip Ely played for Saban at Alabama from 2011-12.

It’s the final home game for a number of Alabama seniors, who have gone 50-4 over the past three-plus seasons. The group includes Davis, linebacker Anfernee Jennings and cornerback Trevon Diggs — not counting any juniors who might wind up entering the NFL draft. Saban says the group has “done a great job here for us representing the program in a first-class way.”