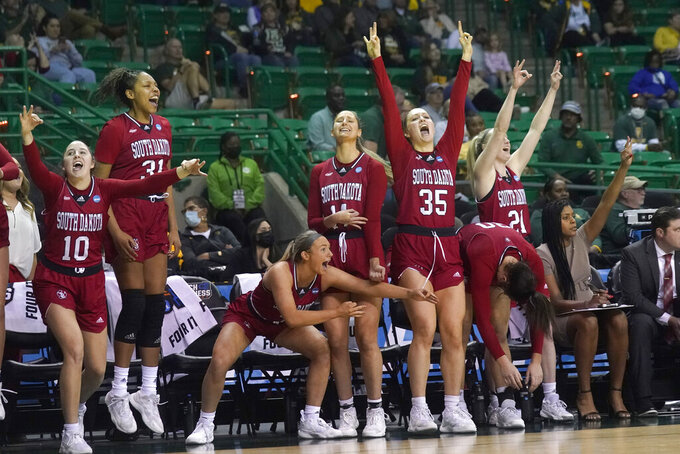 The South Dakota bench celebrates during the second half of a college basketball game against Mississippi in the first round of the NCAA tournament in Waco, Texas, Friday, March 18, 2022. South Dakota won 75-61. (AP Photo/LM Otero)

March Madness is finally part of the women's NCAA Tournament vernacular and the first round has so far aptly fit that phrase.

Six double-digit seeds advanced to the round of 32 — just short of the record seven set in 1998. And that doesn't include two near upsets by No. 14 seeds.

Belmont became the sixth double-digit seed to win when the No. 12 Bruins topped Oregon in double OT. It was the first game to go that long since 2013.

“There’s a lot of mid-major teams that are good enough to compete with the big guys. There are,” Belmont coach Bart Brooks said. “And doing it on a neutral floor I think was a really big deal for us, that we weren’t — if we were in Oregon’s gym today, I’m not sure it would have turned out the way it did. But being on a neutral floor, that’s a big deal."

It's the second consecutive year that Belmont has pulled off an upset in the opening round as a double-digit seed.

South Carolina, Stanford and UConn also made history on the defensive end. The Gamecocks shattered the previous marks for points allowed in a game and in a half in their rout of Howard. The Cardinal and the Huskies became the second and third teams to not allow a point in a quarter in their easy victories.

Stanford added another piece of history: Fran Belibi's dunk on the break. She became the third women's basketball player to dunk in an NCAA Tournament game, joining Candace Parker and Brittney Griner.

Notre Dame's Olivia Miles became the 18th player to have a triple-double in a women's NCAA Tournament game when she had 10 points, 11 rebounds and 11 assists in the Irish's win over UMass. There have been 37 triple-doubles this season — the second-most in Division I history.

And earlier in the week, the women's basketball tournament had its first-ever First Four; the men’s field expanded to 68 teams in 2011.

It was a long time coming, according to Florida State coach Sue Semrau, whose team lost to Missouri State in the new round.

“It’s been way too long that this hasn’t been part of the women’s tournament,” Semrau said. “It’s a learning process, but it was so vital.”

Two 14 seeds, Jackson State and UT Arlington, vied to pull off the first wins ever in the women's tournament for that seed, holding leads in the fourth quarter before falling short.

Not all was crazy in the opening rounds. The No. 1 and 2 seeds all cruised to easy victories, winning by an average of nearly 38 points a game.

Here are a few other highlights from the round of 64:

The 11th-seeded Princeton Tigers won their second NCAA tourney game by taking down sixth-seeded Kentucky. The Tigers have won 18 consecutive games and will try and advance to the Sweet 16 for the first time when they face Indiana on Monday night. Princeton was undefeated in 2015 heading into the NCAAs before beating Wisconsin-Green Bay in its NCAA opener, but fell to host Maryland in the second round. The Ivy League has one other victory in NCAA play — when Harvard pulled off the only win for a No. 16 seed by topping Stanford in 1998.

Stanford coach Tara VanDerveer announced she'd donate $10 for every 3-pointer made in the tournament to Ukrainian aid efforts, and some of her coaching friends in both the men's and women's fields agreed to jump in as well, including Bruce Pearl and Dawn Staley. Staley hoped that coaches could use their platform to also raise money with each tournament rebound to help homelessness in places like Columbia, South Carolina, or Staley’s hometown of Philadelphia.

It's been a great start to the tournament for the Big 12, which went 6-0. Baylor, Texas, Kansas, Kansas State and Iowa State were all victorious. Oklahoma capped off the first round with the final win for the conference. Coupled with the Big 12 men's teams in the NCAA Tournament, the league went 12-0 in the first round.