March Madness paying off for players under mishmash of rules 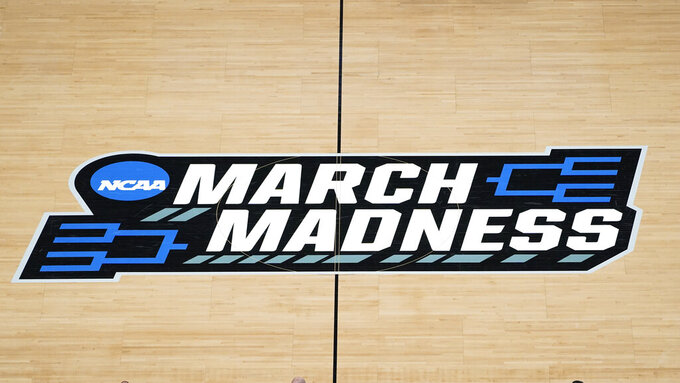 FILE -The March Madness logo is shown on the court during the first half of a men's college basketball game in the first round of the NCAA tournament at Bankers Life Fieldhouse in Indianapolis, Saturday, March 20, 2021. Kansas, Villanova, North Carolina and Duke will play in the first Final Four to take place under the new world of “name, image and likeness” endorsements in college sports. It allows college players to earn money through endorsements. (AP Photo/Paul Sancya, File)

NEW ORLEANS (AP) — At long last, some of the cold, hard cash in the billion-dollar world of college sports is hitting the wallets of the players themselves by legitimate means. One expert estimates by the time next year's Final Four rolls around, every men's basketball and football player on a major Division I roster could be making $100,000 or more.

On one hand, it's a long-overdue development that will forever change the landscape of what has been widely disparaged as among the most unfair labor markets in America. On the other, trouble could be looming for an industry with few rules that doles out big bucks to teenagers with big dreams.

“We have gone from a strict prohibition to now being more liberal than any other sports organization in existence,” Purdue athletic director Mike Bobinski said of the changes that have taken hold over the past nine months. “And that’s a really odd transformation that we need to somehow, I think, strike a middle ground here, eventually.”

This week, Kansas, Villanova, North Carolina and Duke will play in the first Final Four to be held under the new world of “name, image and likeness” (NIL) endorsements in college sports. That world is comprised of a loosely regulated mishmash of state laws and university-written rules that set different standards across the nation with little transparency about which players get what or where it comes from.

The ability of athletes to make money off endorsement deals began last July 1, triggered by a series of events: several states passed laws to make the arrangements legal; proposed federal legislation to regulate NIL stalled; the Supreme Court ruled in favor of athletes' rights to be compensated; and the NCAA never found a way to put the new business model under its umbrella before the state laws went into effect.

What resulted was an open market that, as Barbara Jones, the CEO of Outshine Talent, put it, resembles “the Wild West, in that a lot of people are involved in this, and they don't know what they don't know.”

Because schools and athletes are under no obligation to disclose the terms of their deals to endorse anything from seafood restaurants to silk pajamas to sneakers, the parameters of both the individual agreements, and the sum of all the deals combined, have to be teased out via anecdotes from social and traditional media, along with the rare news release from the schools themselves.

Within hours after North Carolina State's Raina Perez made a steal and a layup in the waning seconds of the Sweet 16 of the women's tournament last week, her marketers had produced a T-shirt, selling for $28, emblazoned with her name and the catchphrase “The Steal and the Lead."

And as his team's Cinderella run to the Elite Eight gained steam, Saint Peter's guard Doug Edert got into the act, announcing on Instagram that he'd struck a deal to hawk chicken wings.

Many of these deals are small — four figures or less — and involve athletes using their social media platforms to promote products. Other arrangements come together before players even reach campus.

Earlier this month, The Athletic reported that a five-star high school football recruit had landed an NIL deal that could be worth up to $8 million. The player's name was kept confidential and the website reported he had signed with a fund-raising collective from an unknown school.

The contract does not require the player to attend the donor group's school, and so, remains in compliance with possibly the only ironclad rule in the NIL space — that schools themselves do not tether scholarships or recruiting to NIL deals.

“I think NIL has kind of become something that we all hoped that it wouldn’t, but we thought that it probably would at some point,” Mississippi AD Keith Carter said.

At a rapidly increasing number of schools that play big-time college sports, big-money donors are funding so-called collectives that are designed to sweeten the range of NIL deals for players.

That opens doors for coaches to talk about NIL without directly offering endorsements.

“That’s what I talk about in my recruiting pitches, knowing the power of Notre Dame, and having the resources to help them maximize their name, image and likeness is going to be very beneficial," said Notre Dame women's coach Niele Ivey.

Blake Lawrence, whose company Opendorse is becoming a leading broker between players and companies, estimates every player on a men's basketball and football roster at a Power Five conference could soon be making six figures.

“There are certain football teams where every single starter is driving around a brand new car,” Lawrence said. “A year ago, that would have been the biggest red flag possible, and today, it’s expected in some of these markets.”

Watching all this closely are the coaches, whose very fates could rest on business decisions made by teenagers that, under the letter of the law, they are not allowed to influence. That could be a good thing. Virtually every scandal in college sports over the last 50 years have been centered around either academic tampering or under-the-table money being passed to recruits.

The NCAA has struggled mightily to reign in that behavior, and despite constant pleas from college sports leaders, the help from Congress they have been hoping for is nowhere in sight.

There isn't a ton of faith that the regulating body, which has, of late, shown willingness to cede control of some top-line policy matters to the conferences, will do much better here.

“Unfortunately, I think we’ve proven that we can’t rely on ourselves to just self-regulate,” said Bobinski, the Purdue AD.

In a best-case scenario, some coaches suggest NIL could change things for the better and add a long-missing layer of stability to the more than 1,000 schools that run NCAA sports programs in America.

The “one-and-done” rule that allows basketball players to leave college for the NBA draft after one year of school has created a dividing line in Division I between schools that pursue those type of players (Kentucky, Duke, Kansas) and those that generally don't (Purdue, Wisconsin, Villanova).

The rapid movement of players has been expanded by the revamping of the “transfer portal,” another fairness-minded move that now allows players to change schools without sitting out a season, as was the decades-old custom.

The optimistic view is that if a player settles down at a school while making decent money on the side, he or she might decide four years and a degree, all from the same school, are a doable thing.