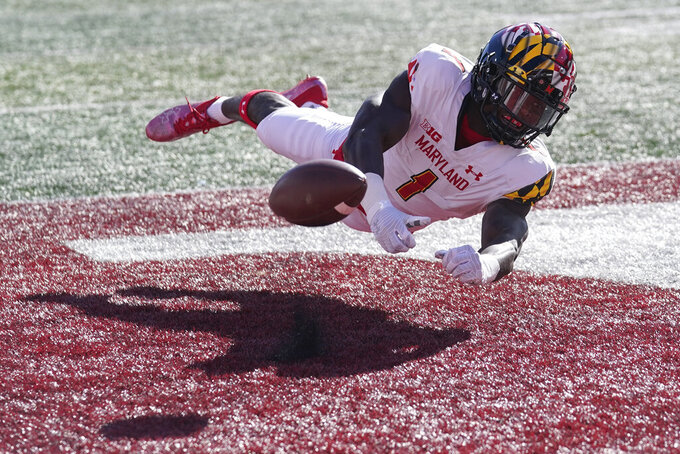 Maryland wide receiver Rakim Jarrett dives as he tries to make a catch during the first half of an NCAA college football game against Indiana, Saturday, Oct. 15, 2022, in Bloomington, Ind. The pass was incomplete. (AP Photo/Darron Cummings) 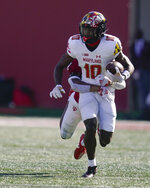 BLOOMINGTON, Ind. (AP) — Following an injury to Taulia Tagovailoa in the fourth quarter, Billy Edwards Jr. stepped in and led a game-winning drive to lift Maryland past Indiana 38-33 Saturday.

After getting hit as he threw a pass, Tagovailoa was carted off the field with an apparent knee injury with just over 14 minutes remaining in the fourth quarter. Tagovailoa had been the Terrapins’ main source of offense, throwing for 270 yards and two touchdowns while also running for a score.

After the game, Maryland coach Mike Locksley said Tagovailoa will be getting an MRI when the team returns home to College Park, Maryland.

In his place, Edwards entered the game with Maryland down 27-24 and immediately started making plays, scrambling for 10 yards on his first touch of the day. Although the initial drive ended in a punt, Maryland (5-2, 2-2 Big Ten) quickly got the ball back after forcing an Indiana punt. A 31-yard run by Edwards got Maryland inside the Indiana 5-yard line and two plays later, Roman Hemby punched in the go-ahead score with just over five minutes left on the clock.

Edwards said he only had one thought go through his head when he got the word that he was entering the game:

On the ensuing possession for Indiana (3-4, 1-3), Connor Bazelak completed a short pass to Coby Andison but he was quickly met by Fa’Najae Gotay who forced a fumble which was recovered by Maryland. The Terrapins were able to add an insurance touchdown when Edwards ran it in himself from 3 yards out.

Edwards finished with no completions on three attempts but ran the ball five times for 53 yards and a touchdown.

Maryland grabbed momentum early in the first and third quarters as Bazelak threw interceptions on the first offensive play of each half. In the first half, Indiana received the kickoff before immediately turning it over, allowing Maryland to score just two minutes into the game.

The two interceptions by Bazelak contributed to the Terrapins winning the turnover battle 3-0. After the game, Hoosiers’ coach Tom said the turnover difference decided the game.

“It’s just frustrating, without question,” Allen said. “But got to do a better job protecting the football and it’s just — takeaways, big deal on defense and protecting the ball is a huge deal on offense.”

Maryland: Tagovailoa's health and availability over the coming weeks will be paramount for the Terrapins to remain competitive through their difficult November schedule.

Indiana: The Hoosiers’ offense continued to struggle when it mattered most, struggling in the fourth quarter on Saturday after failing to score in the second half in each of its last two games. Down by four with five and a half minutes left, Indiana had the ball with a chance to put together a go-ahead drive, but a fumble on the second play of the drive allowed Maryland to take possession and bleed the clock.

Indiana: Travels to Piscataway, N.J., for a matchup with Rutgers.