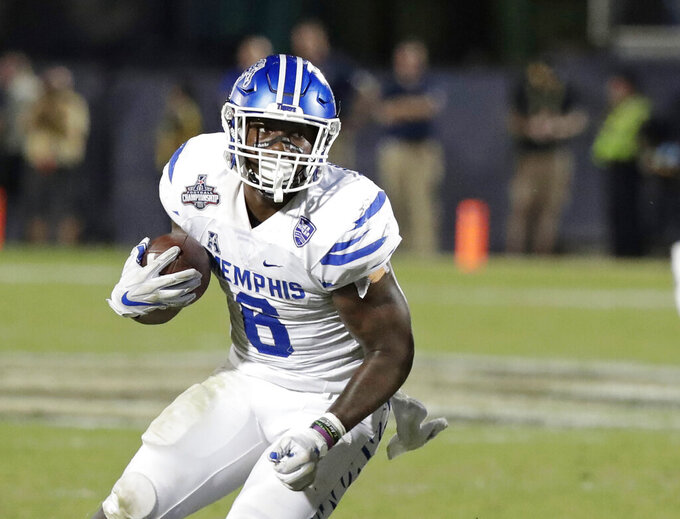 Memphis has a couple more steps it wants to take in its bid to establish itself as one of the nation's top Group of Five programs.

Each of the last two years, Memphis has fallen to Central Florida in the American Athletic Conference championship game. And even though Memphis has earned a school-record five consecutive bowl berths, it has lost its last four bowl matchups.

Those disappointing finishes give the Tigers plenty of incentive heading into the season.

"The past couple of seasons haven't ended the way we've wanted them to," running back Patrick Taylor Jr. said. "We haven't finished out the season the way we preached all year going into fall camp."

Taylor's presence has Memphis confident it can improve upon last year's 8-6 season even as it replaces Darrell Henderson, the nation's second-leading rusher in 2018.

Henderson was selected by the Los Angeles Rams in the third round of the draft after running for 1,909 yards and 22 touchdowns as a junior last season. Taylor rushed for 1,122 yards and 16 touchdowns while averaging 5.4 yards per carry last year.

"Patrick Taylor has shown himself to be a game-breaking back," Memphis coach Mike Norvell said. "He showed capabilities of being a 20- to 25-carry a game guy. I expect that to continue."

Norvell has produced explosive offenses at Memphis. The Tigers ranked seventh in scoring (42.9) last season and second (45.5) in 2017.

Taylor says improved team chemistry could lead to better overall results this year. Taylor noted how the Tigers have been hanging out in the locker room longer and holding more team-bonding activities such as pool parties and barbecues in an attempt to build stronger relationships among the players.

"If you feel that each player on the team is like your family, you're going to want to put your life on the line for them and you want to give your best to them each and every play and each and every day," Taylor said. "I feel the main difference from these past seasons is really just the team bond and the family relationship we have."

Here are some other things to watch with Memphis this season:

Brady White is back as Memphis' starting quarterback after completing 62.8 percent of his passes for 3,296 yards and 26 touchdowns with nine interceptions last season. He threw six interceptions with only four touchdown passes in Memphis' final four games. Memphis' quarterback depth took a hit last week when backup Brady McBride entered the transfer portal.

White's favorite target also returns as Damonte Coxie will try to build on a 2018 season in which he caught 72 passes for 1,174 yards and seven touchdowns.

Memphis is confident its defense can improve this season, thanks in part to the return of a couple of big-play performers. Bryce Huff had 19 tackles for loss and 9 ½ sacks last season. T.J. Carter has 23 pass breakups and seven interceptions over the last two years.