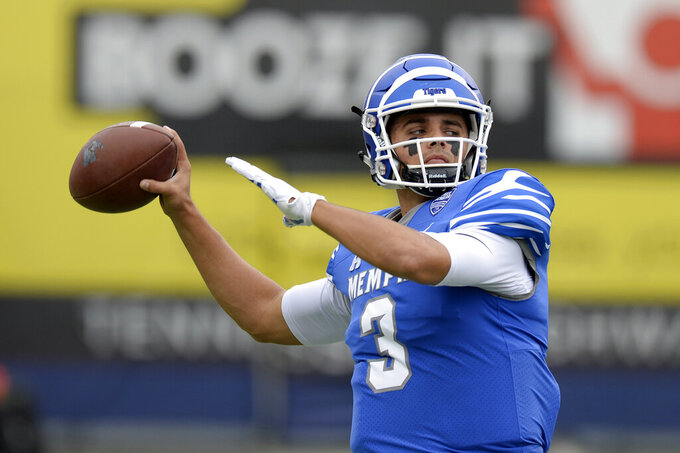 FILE - In this Oct. 13, 2018, file photo, Memphis quarterback Brady White warms up before an NCAA college football game against Central Florida, in Memphis, Tenn. Brady White has two seasons of eligibility remaining, yet he already has earned his master's degree. White now is working toward his doctorate while leading Memphis into its season opener Saturday against Mississippi. (AP Photo/Mark Zaleski, File)

Memphis quarterback Brady White has two seasons of eligibility remaining, yet he already has earned his master's degree.

White dismisses the notion he could have lightened his class schedule now that he's already graduated. White instead is beginning work on a doctorate in liberal studies at the same time that he's directing Memphis' offense.

"I always wanted to push myself academically," White said. "My whole plan was that as long as I was in college and playing ball, I was going to go as far as I can with my education. I'm very fortunate to be at this level."

White hasn't pinpointed exactly what he wants to do once he's done playing football, though he's considered getting involved in the business side of sports. For now, he's focusing on making sure Memphis delivers on considerable preseason expectations as the Tigers prepare to host Mississippi on Saturday in their season opener.

Memphis' offense is working under new coordinator Kevin Johns and attempting to replace Los Angeles Rams third-round draft pick Darrell Henderson, whose 1,909 yards rushing last season ranked second among all Football Bowl Subdivision players. The Tigers need a big year from White as they attempt to maintain their status as one of the nation's highest-scoring offenses.

"You've got to let the game come to you and win," White said "Ultimately, that's all I care about - winning for this team, this city, this program, this university."

White began his college career at Arizona State, where he redshirted in 2015 and played just three games in 2016 before a foot injury sidelined him for the rest of that season and all of 2017.

After earning his bachelor's degree in business in December 2017, White transferred to Memphis. The NCAA has granted White a sixth year of eligibility, giving him the option of continuing his college career through the 2020 season.

"I had my injury kind of early at Arizona State," White said. "I think that's kind of been a blessing in disguise because it's given me the extra time. Even while I was injured, I was kind of ahead in schoolwork, cranking all that out. It's allowed me to be in the position I am today."

Memphis was an obvious landing spot for White after he left Arizona State. Memphis coach Mike Norvell had recruited White to Arizona State while working on the Sun Devils' staff.

Although White threw for 3,296 yards with 26 touchdowns and nine interceptions in his first season with Memphis, he still has room for improvement. Over the last four games of the season, White threw six interceptions and four touchdown passes.

Norvell says White gained 10-15 pounds during the offseason but is moving better than ever.

"His intelligence on and off the field is one of his greatest strengths, but I've been really impressed and pleased to see the physical development that he's also been able to accomplish this offseason," Norvell said.

White will get a chance to show how far he's come in the last year when he faces Ole Miss, which brought in former Colorado head coach Mike MacIntyre as its new defensive coordinator after ranking 108th nationally in pass efficiency defense last season.

"He's an excellent football player," MacIntyre said. "I think he is able to make all the throws."

White believes he will benefit from the fact he isn't a Memphis newcomer anymore. Last year, he was trying to win a preseason quarterback competition while getting to know his new teammates.

Now he has a much better connection with everyone. He expects that to show in his performance.

"I feel a lot closer to my team," White said. "I feel kind of at home here, kind of like when you grow up with your boys and go into high school and everyone's got the same approach and mentality, excited for the season and the goals you want to achieve. That kind of camaraderie, I have with this group. It feels great."