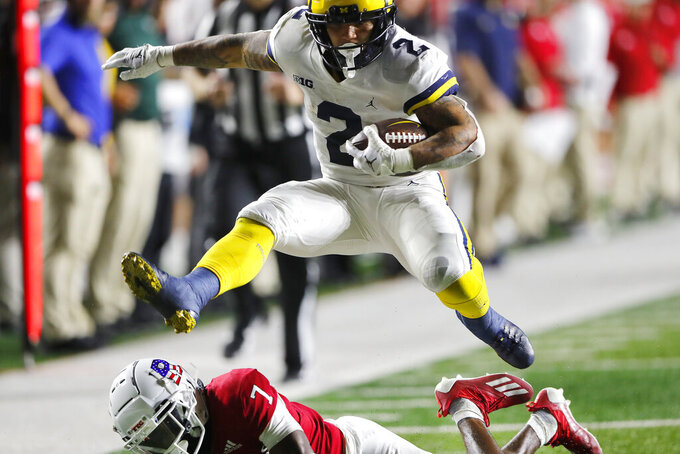 ANN ARBOR, Mich. (AP) — Blake Corum grew up in a one-stoplight Virginia town on a farm with cows, pigs and chickens.

He recalled not wearing shoes when he went outside to explore and create artwork on trees by painting with a mixture of charcoal and water.

When Corum was very young, that was the only playing some thought he would do.

“I was in the hospital a lot growing up because of a heart condition," Corum said in an interview with The Associated Press. “Doctors said I probably wouldn’t be able to play sports."

Clearly, they were wrong.

He may prove to be the most pivotal player in The Game against No. 2 Ohio State (11-0, 8-0, No. 2 CFP) on the road Saturday with a spot in the Big Ten championship game and likely the College Football Playoff at stake.

His numbers stack up well with players at his position who have won the Heisman Trophy this century.

Corum might have a shot to win the award if he can put together a spectacular performance in a win against the Buckeyes as former Michigan stars Desmond Howard and Charles Woodson did before being named college football’s most outstanding player.

The 5-foot-8, 210-pound shifty and powerful running back has run for 1,457 yards and scored 19 touchdowns, statistically putting him in comparable company with Heisman Trophy-winning running backs Derrick Henry, Mark Ingram and Reggie Bush.

Off the field, Corum seems even more special.

A day after hurting his left knee in a win over Illinois, he used funds from name, image and likeness deals to donate 300 turkeys, green beans, apple sauce, milk, a winter hat and hand sanitizer to families in Superior Township and Ypsilanti, Michigan.

“The impressive part is, he's not just out here as a volunteer doing the work, he's writing the check," said Bilal Saeed, who assists Corum on community service initiatives and NIL deals.

Corum, who also donated hundreds of turkeys last year, had to be convinced that publicly sharing what he does in the community served a greater good than worrying some people may think he's trying to get credit for his charitable efforts.

“I've been blessed my whole life so I just want to bless others and see them smile," Corum said Sunday after noticeably limping while handing out frozen turkeys and more during his second annual giving event. “This is what I live for. I'll be doing this until the day I die."

Corum said he gives away half of what he makes with NIL agreements, including giving Wolverine boots, gear and money from a deal to Michigan's offensive linemen.

Corum was raised in Marshall, Virginia, about 50 miles west of Washington, D.C., by parents who spent 4 hours a day driving him to and from St. Vincent in Laurel, Maryland, early in his high school career.

As an undersized running back aiming for even more exposure to major colleges, he spent his final two years of high school boarding at St. Frances Academy in Baltimore.

“He’s a combination of Walter Payton and Barry Sanders,” said Michigan associate head coach Frances “Biff" Poggi, Corum's last high school coach and the next coach for the Charlotte 49ers of Conference USA. “He runs with the same strength as Payton and is as elusive as Sanders with a jump cut that’s as good as anybody’s I've ever seen."

Corum's parents own a landscaping business and after putting him to work as a young kid, they saw signs early on that he was a giver.

“Blake always wanted to put some of his money that he earned in the church offering," his father, James Corum, said in a telephone interview Monday. “Everything he does on and off the field, it just makes me proud to have him as my son."

Just as doctors had doubts about his ability to overcome a heart condition to play sports, Corum still hears from naysayers suggesting he's too small to excel in football.

They've been proven wrong, too.

“People used to always say — and some say it to this day — that I was too small and too short," Corum told the AP. “It's just fuel to the fire."