Minnesota moves on from opening shutout to host W. Illinois 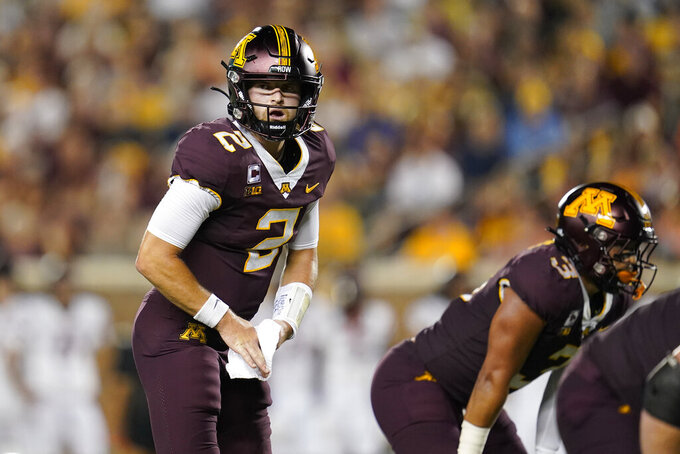 Western Illinois lost 42-25 in the opener at nationally ranked FCS foe UT Martin, the first game under head coach Myers Hendrickson. The Leathernecks, who went 4-25 over the last three years, were picked in the Missouri Valley preseason poll to finish last in the stacked 11-team league. Hendrickson played wide receiver for Western Illinois from 2009-11.

The Gophers, after dominating New Mexico State during their opening 38-0 victory over New Mexico State, will have another opportunity to maintain that momentum against an overmatched opponent in every way. The defense could use more work, actually, after a program-record-low 33 plays were run by the Aggies, whose 91 total yards were the fewest by an FBS team in a game so far this season.

Western Illinois: Anthony Quinney, who's listed on the depth chart at the rover position, a linebacker-safety hybrid, had a team-high 15 tackles (one for loss) against UT Martin in his Leathernecks debut. He's a junior college transfer.

Minnesota: TE Brevyn Spann-Ford, who's primed this season for his most prominent role yet both as a receiver and a blocker, had two receptions for 29 yards in the opener.

Minnesota beat Western Illinois 29-12 at home on Sept. 14, 2013, in the only previous meeting between the two schools. ... The Gophers are 15-1 in nonconference and bowl games under coach P.J. Fleck, the fifth-best record in the FBS during that span behind Alabama, Georgia, Oklahoma State and Iowa. ... Illinois accounts for the most out-of-state players (12) on Minnesota's roster. Fleck and three of his assistant coaches are also Illinois natives. ... The Gophers are 60-4 all-time against programs currently in the FCS. Their last such loss was to North Dakota State in 2011. ... Minnesota RB Mohamed Ibrahim has a school-record streak of 10 straight games with 100-plus rushing yards.