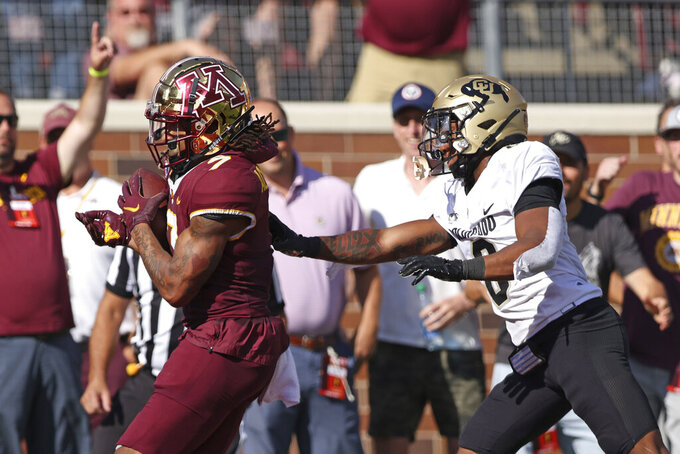 Minnesota wide receiver Chris Autman-Bell (7) carries the ball into the end zone for a touchdown against Colorado during the first half of an NCAA college football game, Saturday, Sept. 17, 2022, in Minneapolis. (AP Photo/Stacy Bengs)

MINNEAPOLIS (AP) — Minnesota will enter Big Ten play without leading receiver Chris Autman-Bell, the sixth-year standout who has been scheduled for season-ending surgery on his right leg.

The unbeaten Gophers are used to this type of setback.

“It’s not if it’s going to happen to you. It’s when, and to who,” coach P.J. Fleck said on Monday after announcing the news.

Autman-Bell was hurt in Minnesota's 49-7 win over Colorado on Saturday, when he landed awkwardly while trying to catch on off-target throw in the second quarter. He grabbed his leg in pain, needed help leaving the field and was sent to a hospital for further examination.

“Your heart breaks for him, because he’s worked incredibly hard,” Fleck said. “He responded the way you’d see somebody respond with really hard news, but it didn’t take him long to wipe those tears away. His mind was already on what he is going to do and accomplish and come back from.”

The procedure will take place on Wednesday. Fleck didn’t specify the diagnosis, other than to describe the injury as to Autman-Bell’s lower leg. The Gophers will apply to the NCAA for a medical redshirt that would allow him to return for a seventh season, should he wish to.

Last year, they lost star running back Mohamed Ibrahim in the first game for the rest of 2021 because of a torn Achilles tendon. Ibrahim's attitude and determination served as an inspiration to the team since then, and his decision to come back for a sixth season influenced Autman-Bell, quarterback Tanner Morgan and center John Michael Schmitz to do the same.

Autman-Bell retweeted a poignant year-old post from Ibrahim shortly after his injury with the question “what if everything you are going through is preparing you for what you’ve asked for?”

Ibrahim is tied for second in the FBS with 464 rushing yards and tied for first with seven rushing touchdowns for the Gophers (3-0), who play at Michigan State (2-1) on Saturday.

Autman-Bell, a native of Kankakee, Illinois, was in Fleck's first recruiting class at Minnesota after flipping his commitment and following him from Western Michigan. He redshirted that first year. The 2020 season didn't count against anyone's eligibility due to the COVID-19 pandemic.

With 1,970 career receiving yards, Autman-Bell ranks ninth in program history. He caught a 39-yard touchdown pass against Colorado before he was hurt. The team's leading returning receiver from 2021, when he had 36 catches for 506 yards and six touchdowns, Autman-Bell has again been Morgan's favored target.

The younger players around him at the position have developed to the point now where the depth ought not to drop off as sharply, with Michael Brown-Stephens, Dylan Wright and Daniel Jackson next in line. Tight end Brevyn Spann-Ford will likely have his pass-catching role elevated, too.

“If this happens maybe three or four years ago, maybe it has a different vibe,” Fleck said. “But there are a lot of guys who can make a ton of plays.”