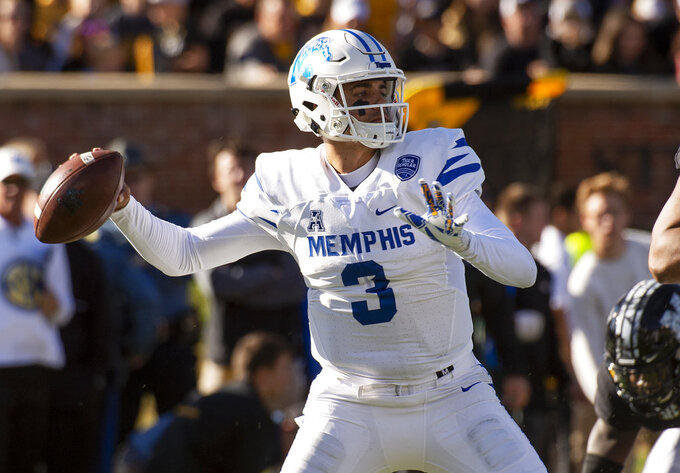 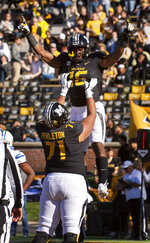 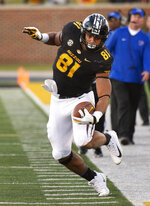 COLUMBIA, Mo. (AP) — Defense came at a premium in Missouri's homecoming game against Memphis. The teams combined for 68 points in the first half, and continued to keep the scoreboard operator busy in the second.

When it was all said and done, Missouri rolled over Memphis. Drew Lock threw for 350 yards and four touchdowns on 23-for-29 passing, and Missouri defeated Memphis 65-33 in its homecoming game on Saturday.

After 17 unanswered Memphis points, Missouri faced a fourth-and-1 on its own 34. Lock completed a pass to Jonathon Johnson. The next play was a 58-yard touchdown pass to Albert Okwuegbunam. Missouri scored 20 consecutive points to open up its lead.

"It's a pretty gutsy call," Lock said. "The tides turned. We picked that up, we scored. Came back, scored again. The momentum swang in our way. It was a big point in the game."

Against Missouri, Henderson spent more time riding the bike than running the ball. Memphis coach Mike Norvell described the injury as a "tweak" and declined to be more specific. Pollard was prepared to come in relief.

"It's a 'next man' mentality," Pollard said. "That's how we go about things. You've just got to be ready when your number's called."

"I thought he was smart with the ball," Odom said. "He's continuing to grow, he's such a talented kid and player. In-game adjustments, I thought, was maybe one of the best ways that he's done up to this point."

Missouri returns to conference play with a home matchup next Saturday against No. 14 Kentucky.