Missouri looks to snap losing skid in battle of Tigers 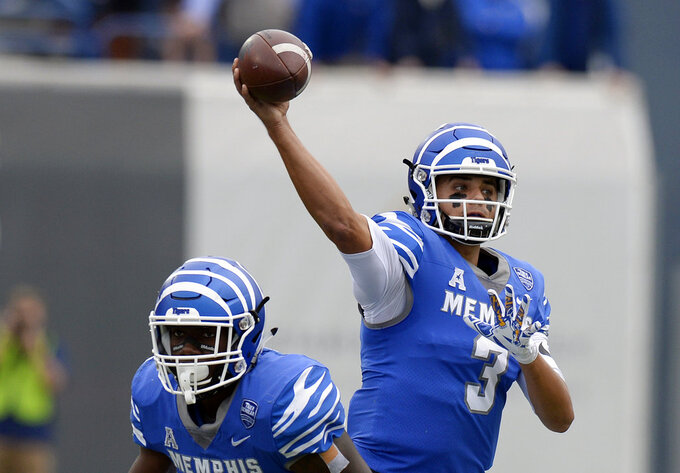 COLUMBIA, Mo. (AP) — Missouri spent last week hanging around in the first half with top-ranked Alabama, helped by injuries to the Crimson Tide's star quarterback and two of their best wide receivers.

Afterward, Tigers coach Barry Odom afterward called the Crimson Tide "as good as I've ever seen," which is saying something given the number of games he's coached. But that tough test should help the Tigers when they return to the field against Memphis on Saturday.

That version of the Tigers (4-3, 1-3 American) also played their toughest opponent of the year last week in No. 10 Central Florida, losing 31-30.

"The focus for us is one snap at a time and no matter the success or the failure that you have on that play that can't have an effect on the next snap," Odom said. "There's been some quarters we've played really well and been explosive, but also when you turn the ball over or give them an explosive play on defense and then you do it again that compiles to turn into one of those quarters."

Memphis can make a statement with a road win against a Southeastern Conference opponent — their last victory of that ilk came in against Ole Miss in 2015. Missouri (3-3, 0-3 SEC) needs a win to get back on track after starting conference play with three consecutive losses.

The game also means a little extra for Odom, who spent three years as the defensive coordinator at Memphis.

"It was a really good place to me and my family," Odom said. "We anticipate an exciting game and look forward to the challenge."

Memphis will feature running back Darrell Henderson, who leads the nation in rushing with 1,133 yards, touchdown with 15 and yards per carry at 10.3. He should provide a stiff challenge for Missouri's run defense, which ranks 25th in the country at 120.2 yards per game.

"You look at them defensively, it's an impressive group," Memphis coach Mike Norvell said. "They have played some really good football teams and have done a great job in how they have attacked."

Missouri's biggest issue during its losing streak has been turnovers and missed opportunities. The Tigers turned the ball over three times against both Georgia and Alabama, and they were flagged for 10 penalties for 83 yards against South Carolina.

"We talk about it on the mental conditioning side of being a six-second competitor," Odom said. "The average play is about six seconds so you focus and process the information once you get the play call you go into the process of having positive self-talk, you get your alignment, and then you get in the moment of playing the play and that takes time and training."

Henderson's exceptional season thus far was recognized earlier this week, when he was named to AP, ESPN.com and Sporting News midseason All-America teams.

"He is as good as there is in college football," Odom said. "He's a tremendous talent in every area. He has speed, he has breakout speed, he's got power, he's strong, tremendous vision."

Missouri's offense is looking for a recovery game after posting just 10 points last week. Quarterback Drew Lock hasn't been able to throw the ball downfield as much during the absence of deep threat Emanuel Hall. The senior wide receiver has been sidelined with a groin injury since being held reception-less against Georgia. He's been ruled out for Saturday.

Two weeks ago, Missouri refused to kick the ball to South Carolina's explosive return man Deebo Samuel. The Tigers may employ the same strategy for Memphis returner Tony Pollard, who has run back six kickoffs for touchdowns in his career. That's one shy of the NCAA career record.

Memphis has beaten a Power Five opponent each of its last three seasons. Aside from a potential bowl game, Missouri is the only such opponent remaining on Memphis' schedule.

"We're going into a hostile environment against a team that has played a lot of good football this year against some of the nation's best talent," Norvell said. "It's going to take an unbelievable effort."