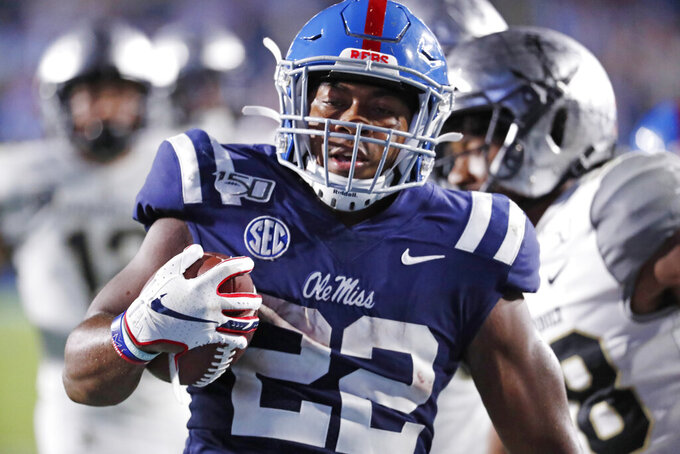 Mississippi running back Scottie Phillips (22) hears into the end zone on a 24-yard touchdown run during the second half of an NCAA college football game against Vanderbilt in Oxford, Miss., Saturday, Oct. 5, 2019. Mississippi won 31-6. (AP Photo/Rogelio V. Solis) 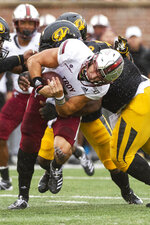 Ole Miss coach Matt Luke has watched every game Missouri has played this season, and he was no doubt excited by the way Wyoming ran wild against the Tigers in their season opener.

It should have portended good things for the Rebels' own vaunted rushing attack.

But the more Luke looked at the video, the more he realized most of that yardage came on a couple of big runs. And a whole lot has transpired since that night in Laramie, including four straight wins by Missouri that have been highlighted by a vastly improved defense.

"It was similar to our Vanderbilt game for us, breaking those big runs back-to-back," Luke said of the Cowboys' performance. "It happened pretty quick. But they are very stout against the run."

The Rebels have run for 692 yards the past two games, a loss to Alabama and a win over Vanderbilt, the most in any two-game span since the school gained 754 yards against LSU and Tennessee in 1977. They also nearly had three 100-yard rushers in last week's game 31-6 rout of the Commodores. Quarterback John Rhys Plumlee had 165 yards and a touchdown, Jerrion Ealy ran for 97 yards and another score, and Snoop Cooner added 91 yards and yet another touchdown.

That doesn't even include Scottie Phillips, who is likely to handle the biggest workload.

It doesn't help Odom's cause that he'll be without Cale Garrett going forward. The senior linebacker picked off two passes and returned one for a touchdown in last week's win over Troy, but later found that he had torn a pectoral tendon and will miss the rest of the season.

First in line to replace Garrett is sophomore Cameron Wilkins, though junior Jamal Brooks could also get increase playing time. The Tigers also could get creative with some of their alignments and ultimately lean on some of their defensive backs, to help fill a massive void.

Missouri quarterback Kelly Bryant hurt his knee against Troy, but an MRI exam confirmed that no ligaments were torn. It was classified as a sprain and Bryant said this week he's "90 percent."

"I've just been testing out the brace, seeing how I move in it," Bryant said earlier in the week. "But I feel good, feel like I'll be ready to play Saturday."

A big reason Ole Miss has leaned so heavily on the run has been the loss of receiver Braylon Sanders, who is still dealing with a hamstring injury. He hurt it earlier this season and aggravated it against 'Bama.

"Hamstrings are funny," Luke said, "because they can run (but) just bursting and changing direction give them some trouble. We're trying to get him better and his hamstring fully recovered."

Luke has a unique contract provision that calls for him to earn $150,000 for each SEC win in any given season starting with his third. The Rebels already have beaten Arkansas and Vanderbilt.

The Tigers continue to try different combinations along the offensive line, especially after right guard Case Cook sat out practice this week with a sore back. That left Yasir Durant at left tackle and Trystan Colon-Castillo at center, but meant Larry Borom moving from right tackle to left guard and Hyrin White working at right tackle. Wallace-Simms moved back to his right guard position.

Luke said that safety Jon Haynes is "probable" to play against the Tigers after dealing with an ankle injury. He participated in walk-throughs this week without any issue, and his spot patrolling the midfield would come in handy against Bryant and the Missouri aerial assault.