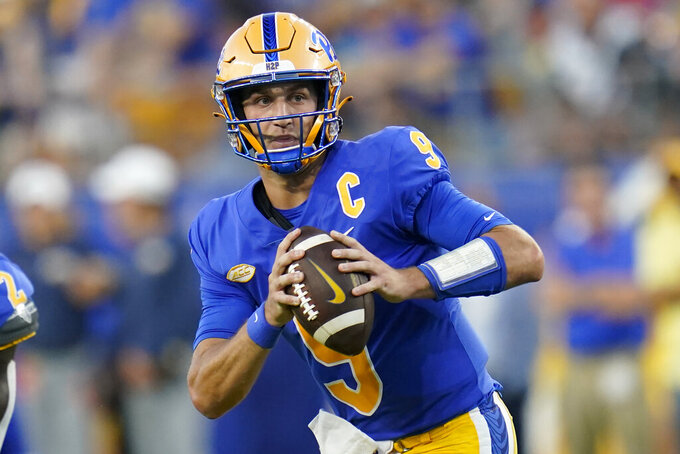 PITTSBURGH (AP) — Pittsburgh coach Pat Narduzzi says he doesn't know anything about the status of his quarterbacks as the 23rd-ranked Panthers prepare for a trip to Western Michigan.

USC transfer Kedon Slovis didn't play in the second half of Pitt's 34-27 overtime loss to Tennessee on Saturday. Backup Nick Patti filled in but appeared to injure his left leg early in the fourth quarter. Patti remained in the game and even threw a tying touchdown pass with 2:23 to go despite limping noticeably between plays.

“I always say, guys, I’m not talking personnel on Monday,” Narduzzi said. “We all know what we know. I know nothing, how about that?”

Patti completed 9 of 20 passes for 78 yards and a touchdown but also took a sack on Pitt's penultimate snap in overtime. He took a 12-yard loss when the Volunteers blitzed and with limited mobility had no chance to escape the rush. His fourth-down toss fell incomplete.

Redshirt freshman Nate Yarnell was listed as Pitt's third-string quarterback last week, though it was Dartmouth transfer Derek Kyler who started to warm up in the fourth quarter when it was uncertain whether Patti would be able to return.

Narduzzi called the third-string situation “unsettled," adding that it's a “toss up” between the two. Yarnell has received more snaps during certain team periods during the fall because he has more experience in the program, but Narduzzi said Kyler is “locked in" to what first-year offensive coordinator Frank Cignetti Jr. is doing.

Narduzzi said the uncertainty on the depth chart behind Slovis and Patti did not factor into the decision to keep Patti on the field.

“When (Patti) was out there, you know, he moved around,” Narduzzi said. “Well, now we weren’t moving the pocket or running a naked (bootleg) or anything like that with him. So we knew we didn’t feel that good. But, you know, (what's happening with the third-stringers) had nothing to do with it.”