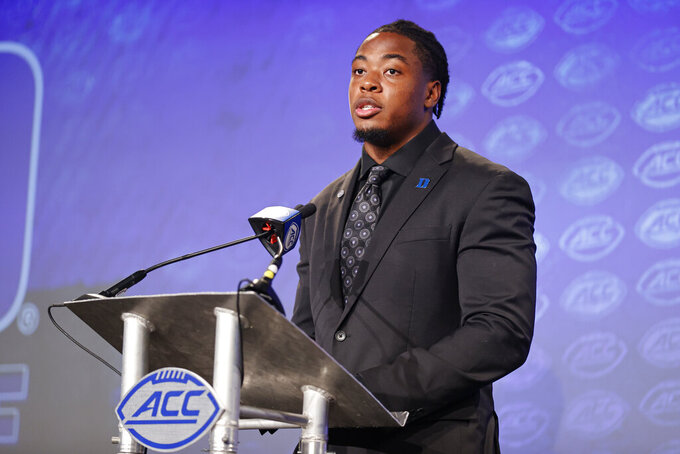 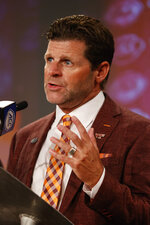 After saying his team “is not happy with where we were last year,” Narduzzi established the team's goals for the 2022 season on Thursday at ACC Media Days.

“We would like to win a national championship," Narduzzi said. “We want to be in the playoffs. We were one game last year away from being in that talk. ... If you go to a 12-team playoff, we’re in it. That’s where we want to be.”

Pittsburgh finished 11-3 last season, becoming the first team from the Coastal Division to win the ACC title since Virginia Tech in 2010. This year the Panthers will have a target on their back, which is fine with Narduzzi.

“I would rather have that challenge (of defending a title) than be sitting at the bottom trying to get my way up the ladder,” Narduzzi said.

But a repeat won’t be easy, especially after losing quarterback Kenny Pickett, the ACC’s player of the year, to the NFL. Pickett was selected in the first round by the hometown Steelers.

Narduzzi said it won't be easy replacing Pickett’s production — he threw for 4,319 yards and 42 touchdowns — and leadership. He expects Southern Cal senior transfer Kedon Slovis and redshirt senior Nick Patti to compete for the starting job.

“It’s going to come down to who wants it more,” redshirt senior offensive tackle Carter Warren said. “Who is going to give it all they’ve got?”

'Canes defensive players have been celebrating forced turnovers since 2017 by donning an oversized 36-inch, 10-karat gold chain around their neck while on the sideline.

“I was never a big fan of it because we'd be (losing) and people would get a pick and throw it on — and we're still down and losing the game," Van Dyke said. “Sometimes it just made no sense. Other times when it was a big turnover, yeah, it was hype and cool and all that. But right now we're really about winning.”

First-year coach Mario Cristobal downplayed the decision to end the tradition by saying, “I think probably the media has put more thought into this than I have.”

Cristobal, who won two national championships with Miami as a player, said he doesn't believe a celebratory chain translates to winning football games.

“It's not a shot or form of disrespect to anybody or anyone,” Cristobal said. “Certainly history is history, whether it’s positive, whether it’s inconsequential. ... We’re just moving in a direction that right now doesn’t involve it."

Miami defensive end Jahfari Harvey said it was a “great feeling” getting to chance to wear the chain last year after intercepting a pass and returning it for a touchdown. But he said he's not upset with the change, adding “we're just focused on working hard.”

The North Carolina Tar Heels expect the addition of coordinator Gene Chizik will bolster a defense that struggled mightily in 2021. Chizik previously worked under head coach Mack Brown at Texas as defensive coordinator when the Longhorns won a national championship and later captured another title as head coach at Auburn.

Still, Brown did his best to downplay expectations.

When a reporter suggested the Tar Heels appear to be criminally underrated this season, he responded, “I love it because we were criminally overrated last year.”

The Tar Heels were the overwhelming pick by the media to win the Coastal last year, receiving 109 of 147 first-place votes, only to stumble to a fifth-place finish in the division with a 3-5 record.

The Division I Council on Wednesday endorsed a concept that would eliminate the blanket NCAA rule prohibiting transferring more than once.

And that's fine by Georgia Tech coach Geoff Collins — even after the Yellow Jackers lost running back Jahmyr Gibbs to Alabama this offseason after he ran for 746 yards and caught 35 passes for 465 yards last season.

The Council also endorsed the implementation of transfer windows — something that gives athletes certain time periods to inform their school of their intention to transfer in order to maintain eligibility for the following year.

“We just need some end caps, right?” Pry said. “We need some defining — some calendar dates — that make sense so that it gives us a chance to keep the roster in good condition."