NC State, Louisville eager to get back into ACC win column 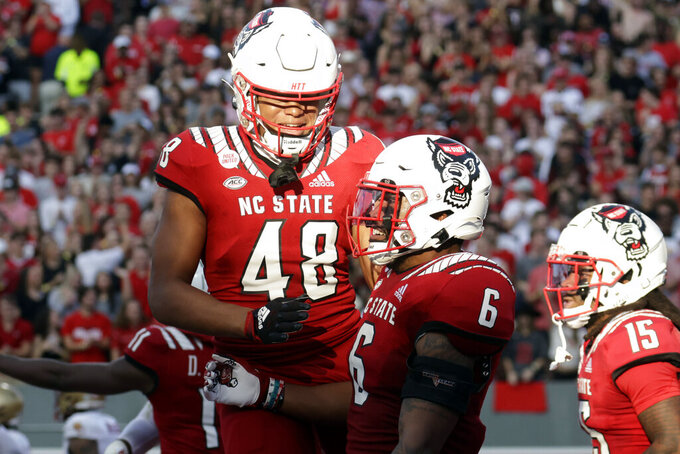 This game is about postseason positioning for two bowl-eligible teams from the league's Atlantic Division. The Wolfpack suffered an unexpected home loss to Boston College last weekend to knock the team out of the AP Top 25 for the first time this season. Still, Dave Doeren's team has a chance to post only the second season with double-digit wins in program history. Louisville's four-game winning streak ended with a 31-16 loss at No. 9 Clemson, but the Cardinals still can achieve its second seven-win season under Scott Satterfield.

N.C. State's offensive line vs. Louisville's pass rush. The Cardinals enter the game with 36 sacks, just one behind ACC leader Pittsburgh, and average 3.6 per contest. Defensive lineman YaYa Diaby ranks fourth with 6.5 sacks. Meanwhile, N.C. State allows just two per game and has protected MJ Morris well enough for the freshman to come off the bench and rally the 'Pack past Virginia Tech and then upset Wake Forest.

N.C. State: RB Michael Allen. The first-year running back has stepped up in the past two games to provide some needed production with Demie Sumo-Karngbaye banged up. He had a team-high 77 yards on the ground in the BC loss to go with a 9-yard catch.

Louisville: WR Tyler Hudson. The senior transfer caught 11 passes for a career-high 163 yards at Clemson, his fourth 100-yard game this season. Hudson has 17 receptions for 305 yards the past two contests, and his 866 yards rank second in the ACC. He needs 134 yards to become Louisville's seventh player with 1,000 yards receiving.

N.C. State's home loss to Boston College came with the program on the verge of claiming a 17th straight home win to set a new program record. ... N.C. State won its last trip to Louisville in 2018. ... This will be N.C. State's first game as an unranked team since beating Florida State on the road last November. ... Linebacker Momo Sanogo had a career-best 14 tackles at Clemson and has posted 27 the past two games. ... Quarterback Malik Cunningham was being evaluated daily for a shoulder injury but is listed as the starter. He needs one touchdown to surpass 2016 Heisman Trophy winner Lamar Jackson (119) as career leader in TDs accounted for.