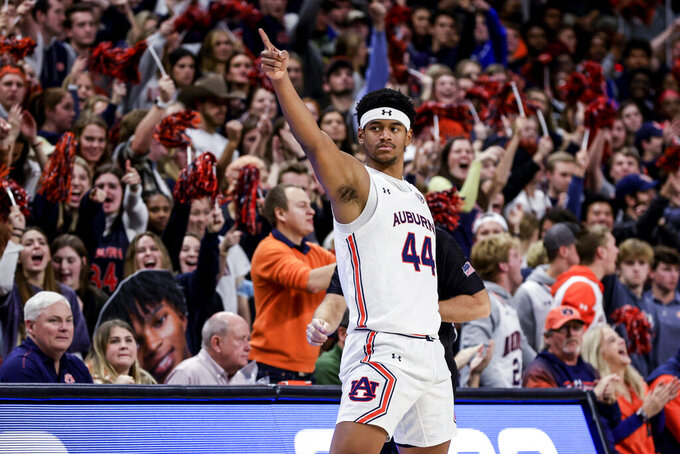 Auburn center Dylan Cardwell (44) reacts after a Georgia turnover during the second half of an NCAA college basketball game Wednesday, Jan. 19, 2022, in Auburn, Ala. (AP Photo/Butch Dill)

INDIANAPOLIS (AP) — NCAA member schools voted to ratify a new, streamlined constitution Thursday, paving the way for a decentralized approach to governing college sports that will hand more power to schools and conferences.

The vote was overwhelmingly in favor, 801-195, and was the main order of business at the NCAA's annual convention. NCAA President Mark Emmert, in his state of college sports address — delivered via video conference to a convention ballroom because he is currently in COVID-19 protocols, called the new constitution more of a “declaration of independence.”

Now each of the association's three divisions will be empowered to govern itself.

The new constitution is 18 1/2 pages, down from 43, and mostly lays out guiding principles and core values for the NCAA, the largest governing body for college sports in the United States with more than 1,200 member schools and nearly 500,000 athletes.

The move is just part of a sea change for the NCAA and the first major shift in its governance model since 1996. It comes with the hope that it will reduce college sports' exposure to legal challenges after a resounding rebuke from the Supreme Court last spring.

“We had to be able to demonstrate that we have the capacity to take this thing and prove we can govern ourselves,” Georgetown President and NCAA Board of Governors chairman Jack DeGioia told The Associated Press. “This is fundamentally a question of self-governance.”

For Divisions II and III, where athletics is treated more like other on-campus extracurricular activities, little will change. Still, most of the dissenting voices during the open forum that preceded the full membership vote came from those ranks.

“Why are we still trying to stick together?” asked Betsy Mitchell, athletic director at Cal Tech.

In Division I, the goal is a potentially massive overhaul that figures to be more contentious.

“Most of our challenges are D-I challenges and we needed to unlock the ability of D-I to be able to address those concerns,” DeGioia said.

Athlete compensation and benefits figure to be key topics. Notably, the new constitution states: “Student-athletes may not be compensated by a member institution for participating in a sport, but may receive educational and other benefits in accordance with guidelines established by their NCAA division.”

The 21-person panel, comprised mostly of athletic administrators and university presidents, reports to the Division I Board of Directors and does not have representation from all 32 D-I conferences.

Sankey and Cromer met Thursday with the board for two hours, seeking clarity: Just how transformative can the committee's work be?

Division I has 350 schools, with a wide range of athletic missions and goals. Schools like Texas A&M and Texas have athletic department budgets of more than $200 million, but D-I also has small, private schools that spend less than $10 million a year on sports.

What tethers those schools is competition, such as the lucrative March Madness basketball tournaments.

The questions before the transformation committee include requirements for Division I membership; who has a say in making and enforcing rules across the division; what schools and conferences get automatic access to championship events; how revenue is shared; and what limits, if any, should be placed on financial benefits to athletes?

“A model that treats student-athletes as employees is not one we want,” Patriot League Commissioner Jen Heppel said.

But in a new era in which athletes can be paid several thousand dollars by their schools just for staying academically eligible and they can be compensated by third parties for use of their name, image and likeness, what crosses the line?

“I think if we do it right it will strengthen the relationship between institutions and student-athletes,” Cromer said.

The wealthiest and most powerful football-playing conferences, such as the SEC and the Big Ten, do not want to be held back from spending their riches on athletes. Much of the rest of Division I worries about how to keep up.

“The big-picture questions, frankly, are focused on what does Division I want to be, how does it define itself? What holds it together? What differentiates different members of that division?” Emmert told the AP.

The so-called Power Five conferences, whose 65 schools tend to dominate Division I competition, also include the Big 12, Pac-12 and Atlantic Coast Conference.

The Knight Commission on Intercollegiate Athletics has recommended moving major college football from under the NCAA's umbrella altogether and creating a separate organization to manage the 10 conferences and 130 schools competing in Division I's Bowl Subdivision.

The NCAA has no jurisdiction over the College Football Playoff and the hundreds of millions in revenue it generates for FBS schools and conferences.

South Dakota State athletic director Justin Sell, whose school competes in the Summit League for most sports and the Missouri Valley for Championship Subdivision football, said he believes the Power Five can have the leeway they desire while maintaining Division I's big tent.

But first the Power Five must agree on how they want to operate, Sell said.

"Then we can weigh how that might end up interacting with a group of schools that certainly has a different funding mechanism,” Sell said.

The transformation committee is scheduled to meet weekly, both in person and online, over the next six to seven months. Emmert has said he hope reforms can be in implemented as soon as August, but Sankey said the message from the D-I Board of Directors was it is more important to get it done right than fast.

“This is one that just getting our arms around the task is a challenge,” Sankey said. “But problems yield to effort and we have a set of problems and we're going to have to apply a lot of effort to.”